from 12-20 may, design lovers of all ages can head to times square for the fifth edition of new york’s biggest public design interface: the design pavilion! held annually during nycxdesign—new york city’s design week—the nine-day interactive hub for all things design will make broadway between w 43rd and w 48th streets its home.

founded and produced by ilene shaw (shaw + co productions) in partnership with the times square alliance, the design pavilion will offer engaging installations, pop-up markets, immersive activations, and more across five plazas, as well as produce an enriching schedule of talks on the subjects of design, sustainability, and the future of our cities.

in just five years it has exponentially grown from 25,000 visitors to close to 5 million and expects 400,000 visitors daily in 2020. admission is free and the pavilion is open to all who pass by, encouraging exploration and curiosity about design in so many fresh and innovative forms.

magis, the italian design company, presents a temporary ‘pop-in’ exhibition at herman miller’s new york flagship (251 park avenue south). the magis way at herman miller is an experiential demonstration of the brand spirit – the most robust ever presented in north america – and is designed by swedish firm note design studio, encompassing nearly the entire second floor of the herman miller showroom.

“it is important to us that architects, designers and design lovers can see, touch and feel our products, says alberto perazza, ceo of magis. “for us, design is in our dna and we love sharing it with the public and international design community.”

the brand’s spirit and success are based on the desire to provide a wide array of users with access to highly functional, quality products manufactured with advanced technologies. to achieve this, collaborating with major international designers is essential –they have a vision of the resulting products that is ethical and poetic as well as aesthetic.

for the magis way exhibit at herman miller, note design studio has developed a pursuit of visuals and volumes through fascinating architectural arrangements within the renaissance-revival building (designed by neville & bagge in 1909) that herman miller calls home. the stockholm-based studio began working with magis in 2018, dreaming up their exhibition spaces for salone del mobile, stockholm furniture fair and more.

a welcoming setting, this space is an invitation to discover the new and iconic designs presented within it, including plato designed by jasper morrison, the officina collection by ronan and erwan bouroullec, bureaurama by conceptual artist jerszy seymour, chair_one by konstantin grcic, the famous spun chair by architect thomas heatherwick and many more. linking the products and vignettes are new rugs from the volentieri collection designed by inga sempé, featuring different types of yarns and weaves to balance color, texture, even light reflection through a mix of neutral and luminous materials. this is a new category for magis and the first time they will be on display in north america.

magis, founded in 1976, is proud of its “made in italy” quality and tradition and speaks an international language by combining craftsmanship with technical advances in manufacturing. the magis way exhibit at herman miller expresses the breadth of their portfolio in a meaningful demonstration.

“we want visitors to feel that they’ve just discovered magis, whether they already knew the brand before they visited the exhibit or this is their first exposure to it,” says tim straker, chief marketing officer, herman miller. “this is a chance to envision magis in one’s own space, whether it’s home or at work.”

among the values shared by magis and herman miller is a commitment to creating responsible design and a strong belief in design authorship. through this relationship and the pop-in exhibition, the two companies have woven a story of creativity and applicable authored designs for north america in a real and credible way.

architects, interior designers and design lovers can visit the magis way at herman miller by contacting (212) 753-3022 to schedule an appointment, or enter through the herman miller store, taking the stairs in the back to the second floor monday through friday 11:00am – 5:00pm.

wanteddesign team will announce their programming for 2017 in manhattan and brooklyn, including the second edition of the french american exhibit « transatlantic creative exchange » as part of oui design, and an extended program in brooklyn dedicated to design schools and young professionals.

A chair for new york. 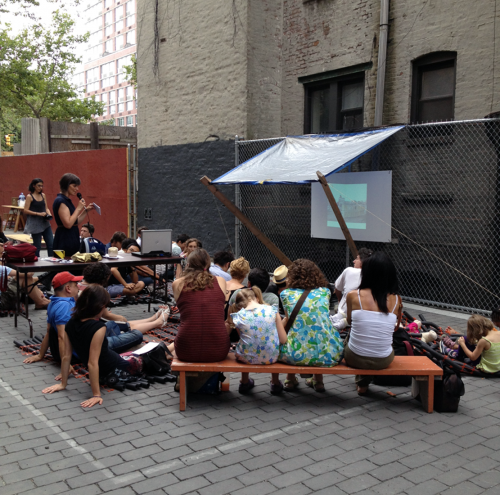 Paris is famous for its thin barebones park chair, seen in the Tuileries and other public gardens. Now, in an effort to look at designing a chair for public spaces in New York comes the NYChair Charrette Lab.
It assembled on Saturday at First  Park, on the Lower East Side of the city at 33 East First Street, site of last year’s BMW Guggenheim urban ideas pavilion.

The creation of Laetitia Wolff of Futureflair and Silva Ajemian, the event included presentations by desigNYC’s Michael Piper of DUB-studios and Evan Bennett of VAMOS Architects.
Kids and adults assembled in groups and came up with ideas that will be judged by officials: Celia Petersen, Parks & Recreation capital projects division; Emily Weidenhof, Public Spaces, DOT Division of Traffic & Planning; Gail Wittwer-Laird, Capital Projects Division for New York City Parks. Stay tuned for the announcement of winners in mid-August.