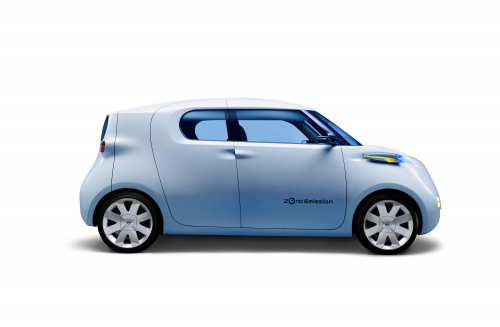 Looking back ( it seems way back ) to the 2010 Paris Motor Show let’s revisit Nissan’s second electric vehicle (EV) concept. The Townpod was developed as a green DIY vehicle. 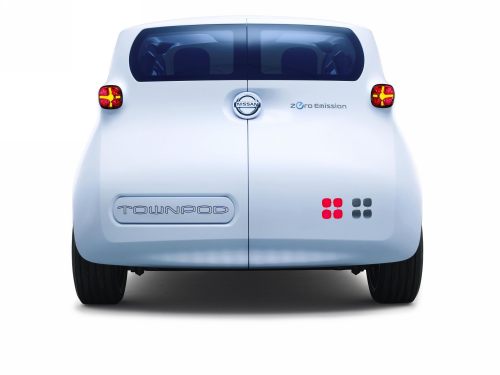 With the Townpod concept Nissan wants to offer the possibility to customers of choosing the interior specifications of their vehicle by using proprietary as well as third-party sourced accessories. The idea is that everyone adapts the car to its individual needs. For example a musician transporting its kit between gigs, a delicatessen proprietor distributing their wares or an architect carrying drawings to a client musician.

According to Nissan’s Exploratory and Advance Planning Department, François Bancon, “Only they know what is essential for their lives, so it is logical that they should be the ones who determine the ultimate specification of their cars. For them an off-the-shelf solution is not enough and the best-equipped people to tailor-make their cars are themselves. What is more revealing is that Nissan Townpod users do not appreciate stereotypes or status symbols. For them, the ultimate status is to have no status.”

[ exterior design ]
Externally Nissan Townpod consist of many familiar elements, yet it is different. It employs the same zero-emission technology found within Nissan LEAF. Charging points can be found in the nose behind an automatically retracting cover.

The headlights reflect Nissan Townpod’s philosophy of stylish utility by serving as position markers when the blue “petals” are closed and headlights when open.

The car is decidedly more van-like with its split rear doors. Innovative hinges allow the rear doors to slide, then open in confined spaces and then fold to the side of the car so as not to obstruct passing traffic or pedestrians. A hatch-like sun roof, directly above the cargo area, allows Nissan Townpod to carry taller objects.

[ interior design ]
The driver is faced with an uncomplicated yet futuristic steering wheel and two familiar stalks to operate the lights and wipers, but other than these controls – which are beautifully simple in their own light – the flowing dashboard is devoid of mechanical switches. Forward or rearward drive is selected using an uncomplicated joystick set into the right-hand side of the driver’s seat base.

The rear seat itself has an interesting trick incorporated into its design. While it is not uncommon to find rear seats that slide or fold, enabling passengers to either prioritize leg room or luggage space, the ultra-slim design of the seats means that the rear bench can fold and slide right into the back of the front seats, freeing the entire, flat-bottomed space behind to carry bulky cargo.

[ dual screen display ]
All controls for ancillaries such as climate control and media playback are accessed through two centrally mounted digital screens. The upper monitor serves as an instrument panel, displaying car speed, battery status and remaining range as well as a satellite navigation system. This system is also equipped with Bluetooth wireless technology, allowing it to communicate with the driver’s Personal Digital Assistant (PDA) that will map out a plan for all your appointments that day. It will also be able to suggest the most convenient time and place for you to recharge its lithium-ion batteries.”

The lower touchscreen provides all controls for the navigation system, allows users to perform system checks on the whole car and operates Nissan Townpod’s audio system.

[ conclusion ]
At its core, a car is a means to transport people or goods from one place to another as simply and easily as possible. Though two year’s old, a long-time in the concept category, Nissan Townpod’s design supports the essence of its function. [ nissan zero-emmissions ] [ nissan ev history ]