Many of the pieces in artist Chris Burden’s show at the New Museum in New York called “Extreme Measures” involve balance. He likes to compare and contrast size and weight by linking things with wires and beams. So when a huge crane beside a skyscraper under construction on 57th Street in New York the other day malfunctioned, it seemed as if a Burden piece had escaped and grown large. The street was shut down due to the menace of a 30 ton concrete counterweight from a crane overhead. And 30 tons is actually a pretty small chunk of concrete.

A similar piece from Burden’s show contrasts a 350 pound meteorite with a 1964 Porsche 914 connected teeter totter style in mock measure. Here the contrast is raw material and pristine design, cosmic melt down and Teutonic metallurgy and precision. Burden was well known in the 1970s for performance pieces called Shoot, from 1971, in which he was shot through the arm with a rifle, and Trans-fixed, in which he was nailed to a Volkswagen Beetle, crucifixion style. [ details ] 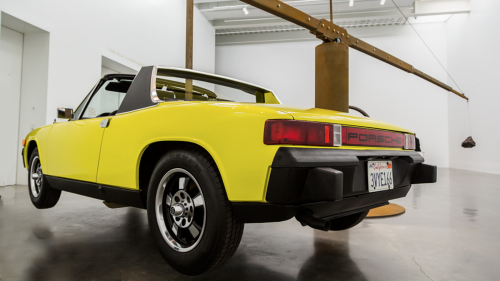 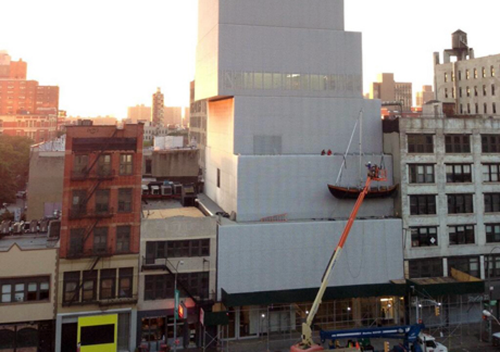 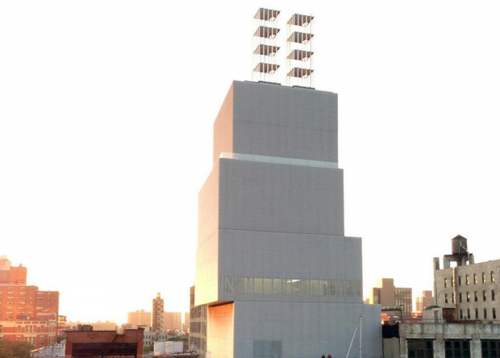 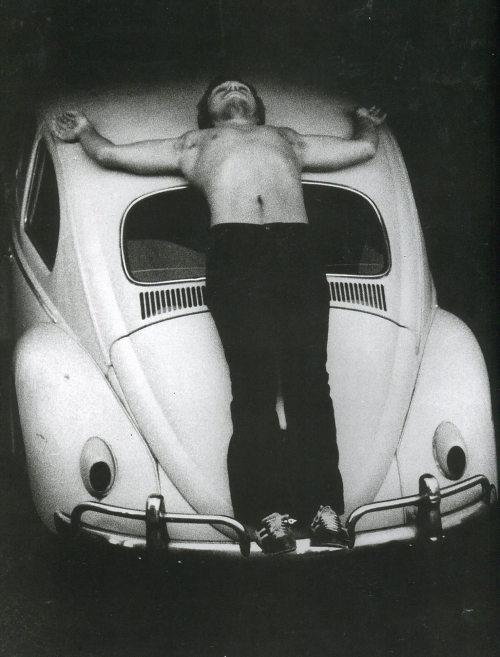 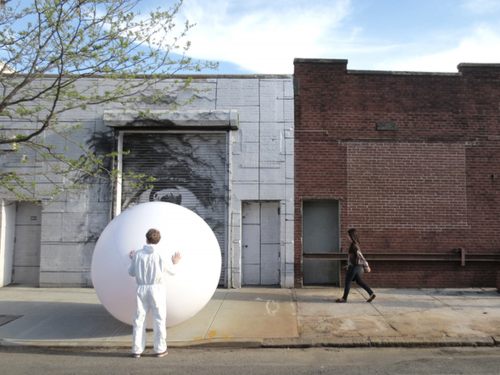 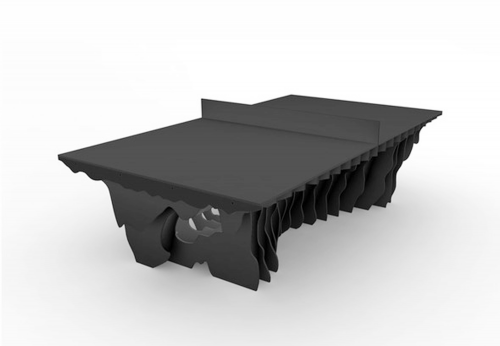 Volume Gallery will present a new version of Bend, a series of upholstered seating, along with select pieces from the Funiture series.

Snarkitecture will also take part in “Predicting the Future“, a panel discussion moderated by Sight Unseen 8 May at 5p. wednesday 8 > 11 may 2013 | pier 57 west side highway at 15th street nyc 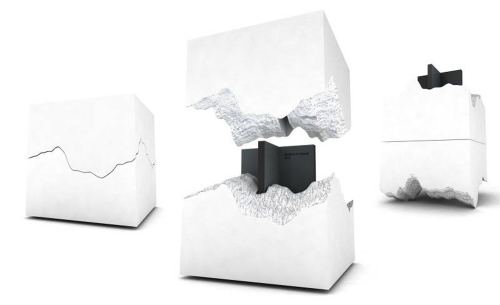 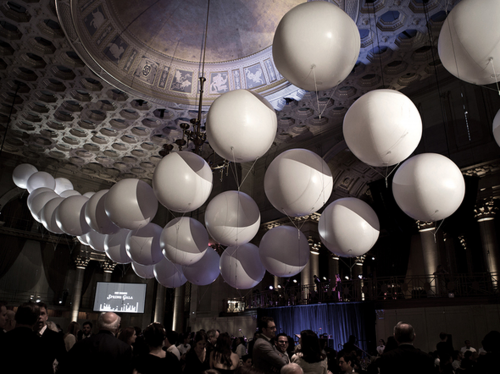 [ New Museum Spring Gala ] Lift was a performance and installation for the New Museum Spring Gala that took place on 10 April 2013 in New York. An array of forty-five inflatable spheres transformed over the course of the evening, slowly manipulating the qualities of the existing architecture in a series of choreographed movements. 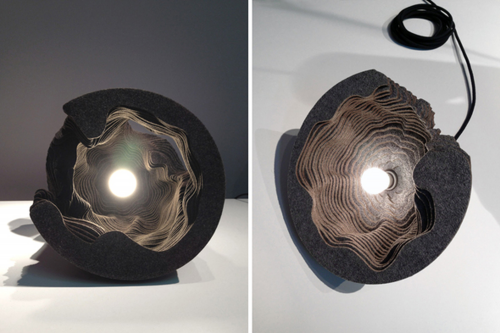 [ Felt Light at Wallpaper* Handmade ] Felt Light is a new series of light fixtures commissioned by Wallpaper* in collaboration with Woolmark. Made from wool felt, the exterior of the fixtures recall familiar forms while the interiors reveal stacked topographic landscapes. Felt Light was on view with Wallpaper Handmade during Milan Design Week and will tour internationally with Wool Lab Design Fair tour. 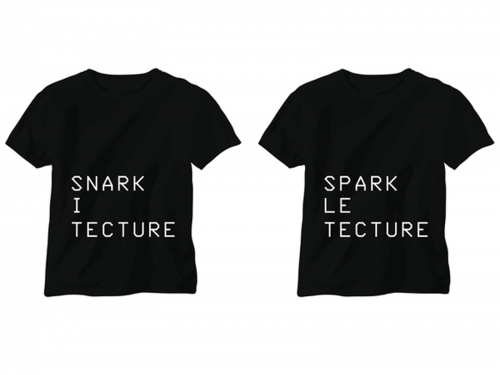 [ now & then ] snarkitecture’s latest news to DesignApplause arrived in a format that inspired a possibly new category ‘Now & then‘. if you’re unashamed of self-promotion, alert us to your current and recent latest & greatest. you just never know.

From ghosts in the machine. 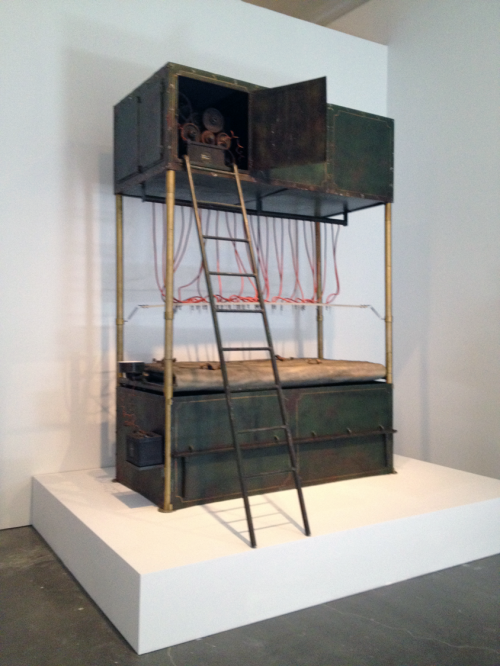 inspired by kafka in the penal colony | click > enlarge

The New Museum has opened “Ghosts in the Machine”, a show that turns out to have quite a lot to do with design. Some of the most interesting ideas about the interaction of people and technology that is such a critical concern of design today had their origins in art in the 1960s.

As laid out by the curators, Massimiliano Gioni, the Associate Director and Director of Exhibitions at the museum and Gary Carrion-Murayari, its Curator, art became obsessed with the machine in the 1960s. Op art and mechanical sculpture were two sides of the obsession. The vision of a future art created by the cooperation of artists and engineers was nourished in such places as the MIT Center for Advanced Visual Studies (CAVS), founded by György Kepes.

The show is a reminder of a time when we associated certain kinds of images with computers—geometric loops and swirls, especially, patterns of the data of physics and astronomy rendered by plotters. Today, when we are accustomed to computers handing images of all sorts and styles, this once common idea seems strange.

While the New Museum has sometimes focused too much on the novel and transient, this show is historical and retrospective. It finds precedents in the past. Today’s multimedia world is anticipated in the crude Cinema dome of the late 1960s. The changing and evolving role of a technology is suggested by the pattern of the Vocoder, included in the show. The Vocoder was a sound recording and manipulating device that was shown as a wonder of the future at the 1939 World’s Fair, then later placed in the service of music making by Kraftwerk and then Afrika Bambaataa. [ ghosts in the machine ] 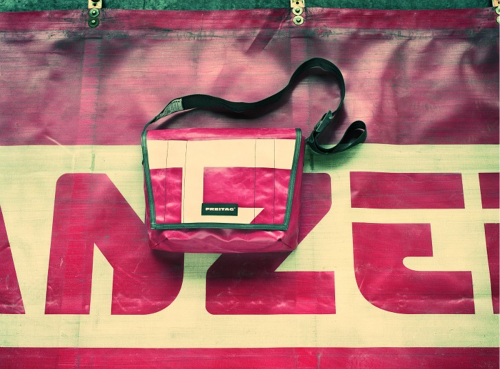 Freitag store –Swiss firm sells messenger bags recyled from old truck tarps, which it calls “freeway bags” on the Bowery across from the New Museum.