our human greed for metals has grown to such an extent that by 2080, the biggest metal reserves will not be underground. instead, they will be above the surface as ingots stored in private buildings or otherwise circulated within products such as building materials, appliances, furniture and an ever-growing market of consumer electronic products.

the earth’s surface has been mined for millennia in search of resources such as metals and minerals to fulfill our production demands. in fact, forging metal changed the course of history: bronze empowered humans to weaponize and gold facilitated local and then global trade. even at this very moment, new cavities are being hollowed out, while existing excavated sites are abandoned or re-filled with new earth—a superficial recompense. our human greed for metals has grown to such an extent that by 2080, the biggest metal reserves will not be underground. instead, they will be above the surface as ingots stored in private buildings or otherwise circulated within products such as building materials, appliances, furniture and an ever-growing market of consumer electronic products.

on the surface of our planet, rivers of ore in the form of these discarded materials stream freely as if in a continuous, borderless continent. efforts to recycle this complex hardware remain new, uncharted and contentious. new logistic structures, technologies and cross-country alliances are being forged to allow for the renewal of metals at the lowest expense. as this shift ensues, the mining industry will be permanently altered. we will enter a new phase, where above-ground scavenging will out-perform and out-value digging below the surface for raw material.

commissioned by the national gallery of victoria in melbourne and developed over two years, ore streams is an ambitious investigation into the recycling of precious electronic waste. the project makes use of diverse media (including objects, video documentation and animation) to address the meaning of production from multiple perspectives, while offering an insight into how design can be an invaluable agent for change. 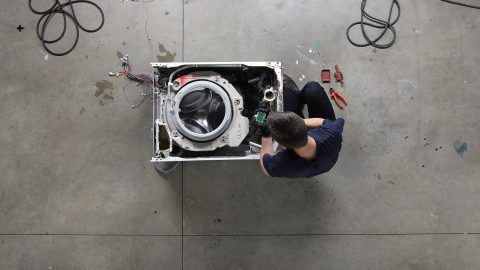 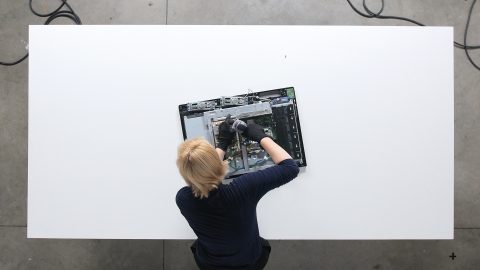 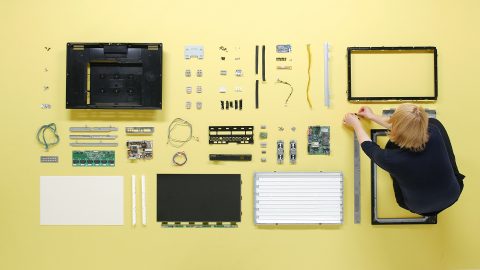 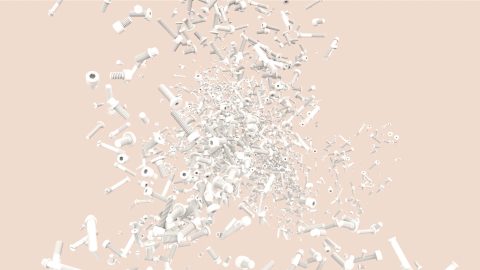 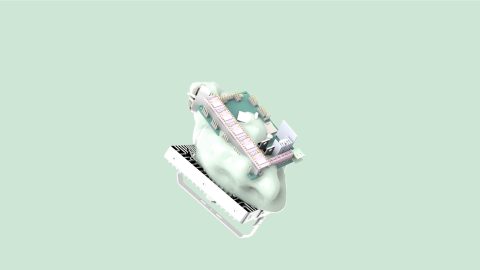 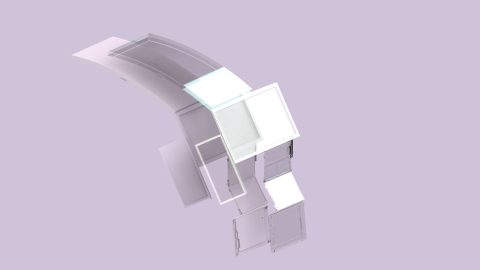 currently, electronics are the fastest growing waste stream. electronic waste is considered especially valuable due to the use of precious metals such as gold and silver in the production of chip boards. while there are efforts to improve the recovery of metals, only 30% of the west’s e-waste makes its way to the appropriate recycling facilities. the remaining 70% are often shipped illegally to developing countries where they are disassembled in poor working conditions and, with no better means, toxic components of electronics are disposed of inappropriately. this proves harmful to both the environment and laborer.

in several countries legislations is now in place to ban such exportation of e-waste and to establish directives to ensure correct processing. yet, lawmakers underestimate the design possibilities that could improve recycling both in developed and developing countries. designers and engineers alike are often unaware of recycling processes and new technologies in place and therefore cannot consider the complications caused.

ore streams includes an eighteen-channel video installation that aims to unpack the problematics of e-waste and offer global strategies that can be applied in order to design products for more efficient recycling. developed as research material, a series documentaries were made that feature interviews conducted by formafantasma with practitioners of the recycling sector including european e-waste recyclers, academic researchers, electronics producers, ngos working in developing countries and interpol, the the international criminal police organization which is responsible for environmental crimes and developing guidelines for government lawmakers.

the video installation also includes four videos where a selection of electronic products are carefully disassembled and recomposed. this acts as a taxonomy, highlighting the material and design complexity of the products.

the core of the video installation is an animation where formafantasma make use of 3d rendering as a tool to visualise possible strategies. the concepts displayed are conceived considering the recycling technologies now in place and the limitations of facilities across developed and developing countries.

a few examples shown include: 1) a common trend in electronics is the miniaturization of products. this has increased the already wide-spread use of glue to attach components in order to save space. designing objects with space efficient connections/clamping systems will guarantee precise separation of materials; 2) the most common problem for both recycling in developed and developing countries, is removal of batteries and hazardous components. the use of visual recognition technologies in the sorting of waste has great potential but remains unexplored. electric cables are very commonly covered in black rubber. yet, due to the dark color and opacity of the surface, they are not recognized by visual detectors. a simple design choice such as using coloured rubber or even a patterned surface, could dramatically improve the recycling of the copper used in electric cables; 3) too often e-waste objects are not labeled with information about their materiality. constant development of new polymers makes it difficult to identify materials and separate them precisely. in developing countries, rudimentary and oft toxic methods are used to determine what a material is, for instance burning is used to understand the composition of a material based on how it melts and the colour of the flames. as a response the designers envision a scenario in which objects would be delivered to recyclers with an embedded digital material passport in the form of a qr code and universal colour coding. 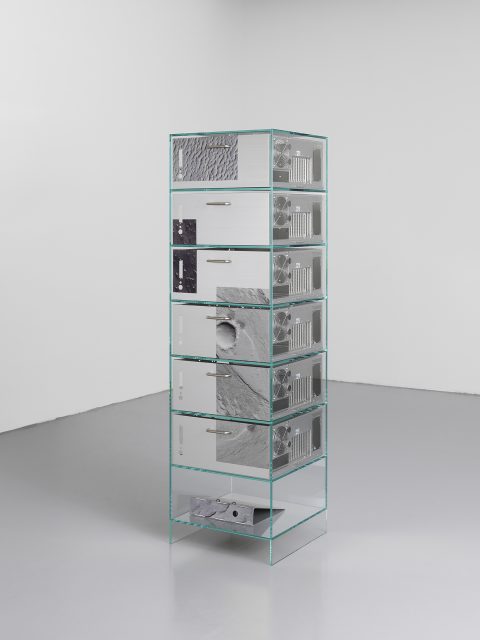 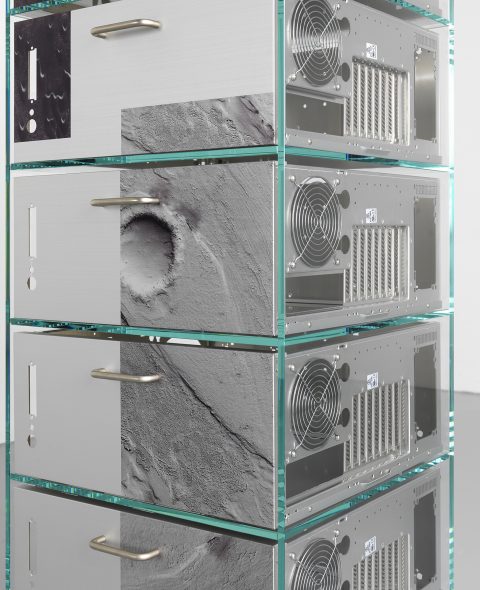 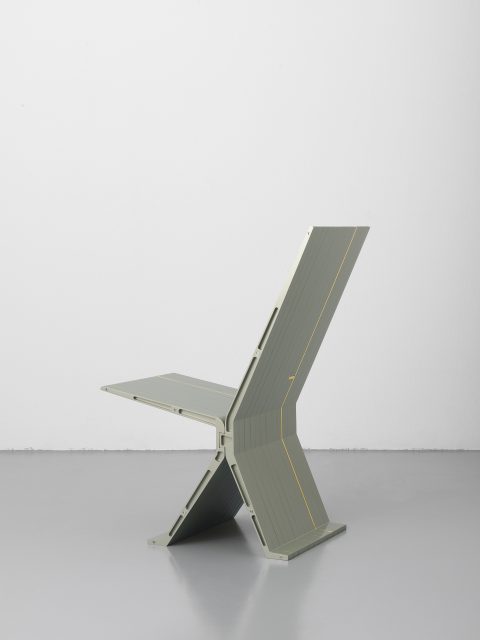 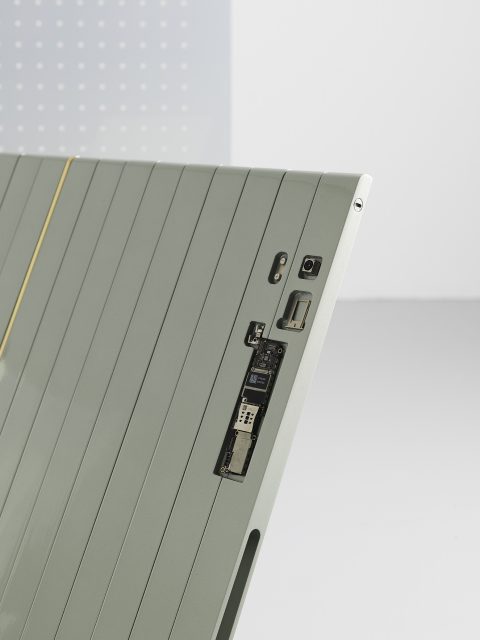 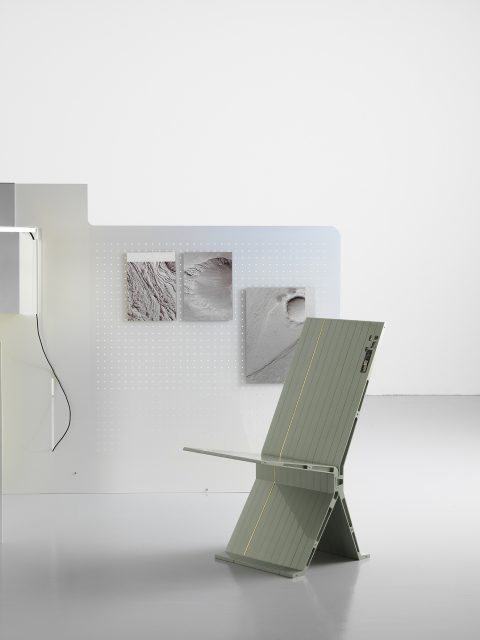 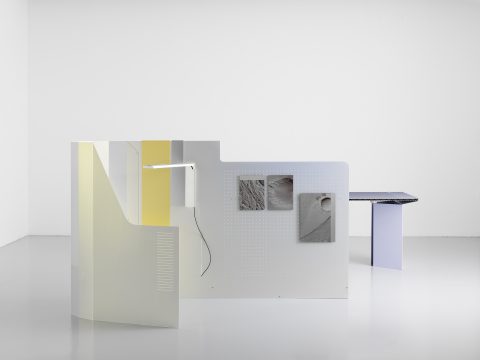 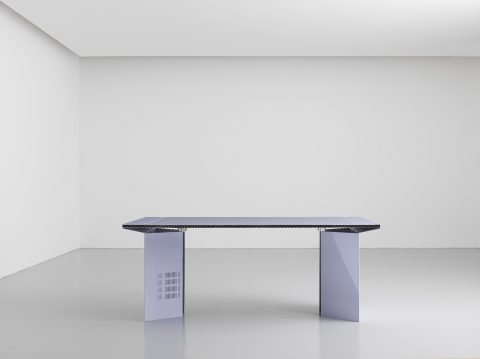 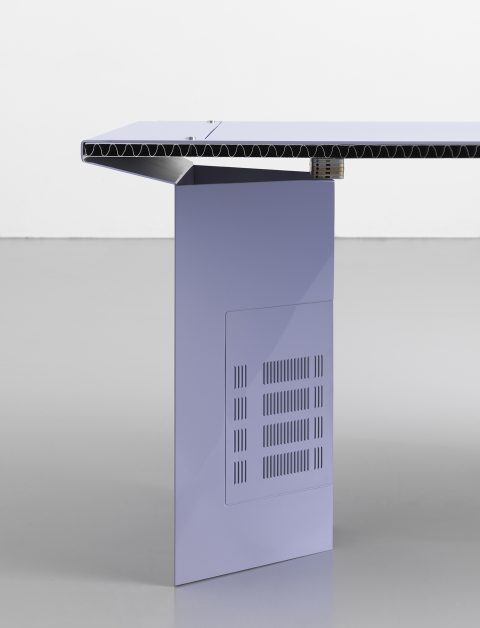 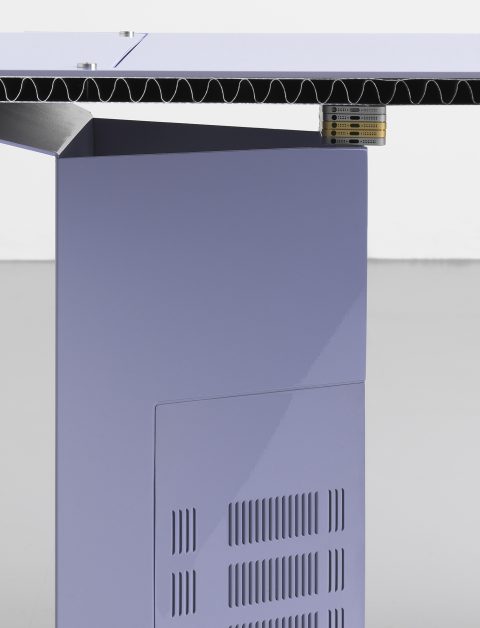 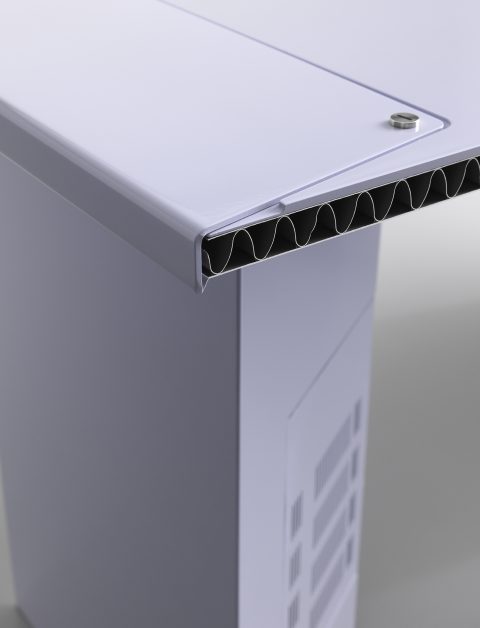 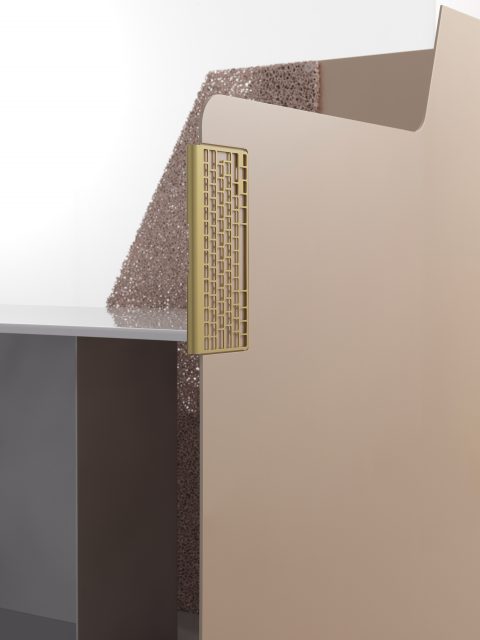 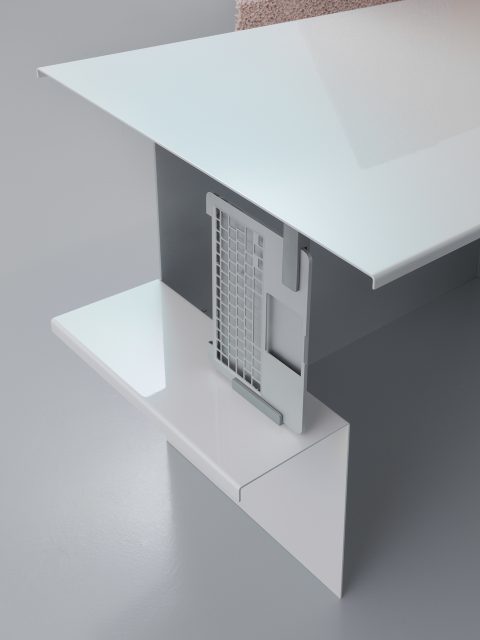 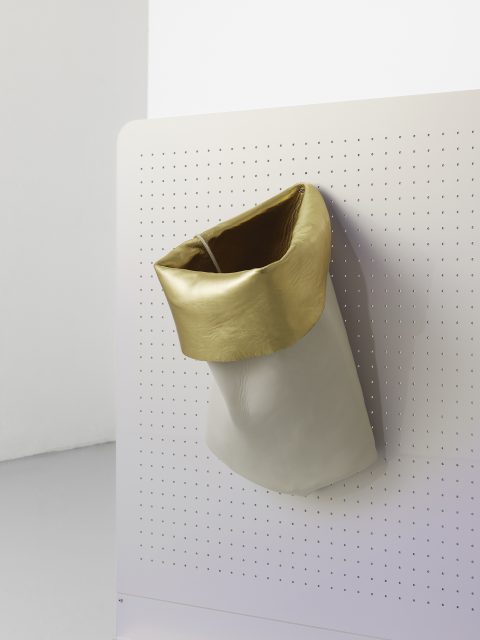 in ore streams, formafantasma have set out to identify ways in which design can be deployed to correct the flaws in the current waste-stream system. but beyond systemic improvements, design can be used to seduce and to elicit a less conscious attitudinal shift for the better. the collection of objects created for ore streams act as a trojan horse, using form and color to initiate a deeper exploration of ‘above ground mining’ and the complex role design plays in transforming natural resources into desirable products.

the collection is composed of a range of office furniture constructed using dead-stock and recycled materials: a cabinet, desk, table, low chair, two self standing structures to be used as cubicles, and a series of supplementary objects: a lamp, shelf and waste basket.

at first glance the objects appear austere, gold-clad and slickly coated. yet, within moments familiar elements begin to emerge. an aerating grid from a microwave under the surface of the table and two piles of mobile phone castings under that. the body of the microwave is integrated on a shelf hanging from one of the cubicles, while a computer keyboard has been inserted into its side. a standing cabinet pairs transparent glass with six empty computer towers used as drawers.
gold scavenged from electronic waste recurs as a finish throughout the series: most visibly, as cladding on the inside of a leather trash bin, as one thin section of the cnc-milled aluminium chair and in two iphones and a keyboard placed in the table and cubicle, respectively.

the office is where modern design principles are most visible; the search for efficiency, ideal standards and a universal style are epitomised by furniture such as the filing cabinet and the modular cubicle. the designers’ choice to reference this environment is a nod not only to these principles, but to the same pragmatic approach of quantification, organisation and efficiency which runs the bureaucracies responsible for regulating and capitalising on the circulation of natural resources, minerals and waste used in the global production of goods.

as is often the case in their work, formafantasma integrate apparently distant elements calling attention to their relationship. in ore streams they juxtaposing these objects with nasa-released images of planet mars’ crateral surface. the images refer to the alien origins of many of earth’s metals. they arrived here in rainstorm of meteorites billions of years ago. so, while the gold used in the furniture is recuperated from electronic waste, the images take a wide view and show how the material does not only belong to this planet but the ecosystem at large–it is only a random crash that landed it here.

while ore streams is a highly specialized project, delving into the details of sourcing raw materials from electronic waste, the imagery from another planet-it’s craters, and soft surface-allow for moments of broader reflection to consider, at least for a moment, how to contemplate these issues from a further vantage point than our own.

in ore streams formafantasma stretch the boundaries of design using it not only as a pragmatic tool for understanding, communicating and solving complex issues, they delve further into the psyche of our design language, problematising the relationship between design and production.