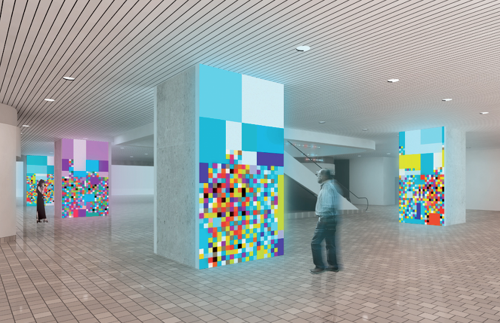 Ivan Toth Depeña’s light-based installation “Reflect” will be permanently installed in the Stephen Clark Government Center Lobby in Miami in late August 2011. Commissioned by the Miami-Dade Art in Public Places initiative in October 2010, the work will illuminate the lobby space while encouraging a sense of discovery.

“After thorough site observation and documentation, it became clear that it is very important for the proposed solution to explore methods of unifying the space’s design/architecture, while providing an updated aesthetic and enlivening the space as a whole,” says Depeña.

As a main stop in Miami’s MetroRail system, the space serves as a hub for commuters; incorporating the notion of daily circulation into his piece, Depeña uses sensors and light to focus on the communal nature and circulatory qualities of the lobby. 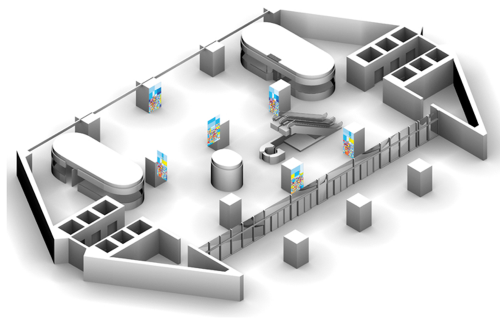 The basis of the project will be custom designed LED light boxes placed at specific locations throughout the lobby space. These light boxes will interact and respond to the commuter’s movement and gesture via camera tracking, creating an energetic and vibrant artwork.

The colorful lights will engage beyond the lobby—as some columns face the public plaza—and the installation will remain functioning even when there are no active participants, as the lightboxes retain the “memory” of users’ interactivity. Sensitive enough to detect the difference between multiple and single users, the system will vary the output and scale of the display to the number of visitors, and the hues will change according to the time of day.

Ivan Toth Depeña is an artist and designer living and working in Brooklyn, NY and Miami, Florida. Ivan’s studio practice is based on his multi-disciplinary approach to envisioning work. With a Masters Degree in Architecture from Harvard University’s Graduate School of Design, Depeña’s output as an artist is informed by his experience in art, architecture, technology and design. Combining many sources of media, technology, form and materials, Depeña seeks to blur boundaries and create work that exists within a new and amorphous hybrid of various creative disciplines. [ ivan depena designs ]

Miami-Dade Art in Public Places serves the community through the implementation of art installations and educational programming dedicated to enriching the public environment and to preserving and enhancing the artistic and civic pride of Miami-Dade County.