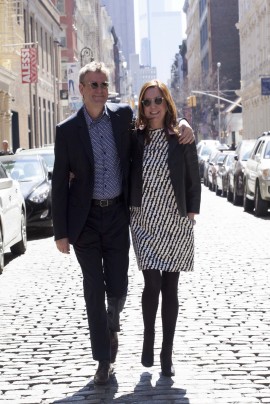 Beatriz Colomina and Mark Wigley have been appointed curators of the 3rd Istanbul Design Biennial, to be held from 22 October to 4 December 2016 by the Istanbul Foundation for Culture and Arts (İKSV).

Internationally renowned architectural historian and theorist Beatriz Colomina is Professor of Architecture and Founding Director of the Program in Media and Modernity at Princeton University. Her books include Manifesto Architecture: The Ghost of Mies (Sternberg Press, 2014), Clip/Stamp/Fold: The Radical Architecture of Little Magazines 196X-197X (2010), Domesticity at War (2007), Privacy and Publicity: Modern Architecture as Mass Media (1994) andSexuality and Space (1992). She is curator with a team of Princeton Ph.D. students of the exhibitions Clip/Stamp/Fold: The Radical Architecture of Little Magazines 196X-197X (which opened at Storefront for Art and Architecture, New York, 2006 and has travelled to 11 venues worldwide), Playboy Architecture, 1953-79 (which opened at NAi Maastricht, 2012 and was at the DAM (Deutsche Architektur Museum) in Frankfurt in 2014, and Radical Pedagogies: Architectural Education in a Time of Disciplinary Instability (Lisbon Triennale, 2013 and Venice Biennale 2014).

Architecture historian, theorist, and critic from New Zealand based in New York, Mark Wigley is Professor and Dean Emeritus of Columbia University’s Graduate School of Architecture, Planning, and Preservation. He is an architectural theorist, critic, and historian from New Zealand who is based in New York. The author of The Architecture of Deconstruction: Derrida’s Haunt (1993), White Walls, Designer Dresses: The Fashioning of Modern Architecture (1995), and Constant’s New Babylon: The Hyper-Architecture of Desire (1998), he coedited, with Catherine de Zegher, The Activist Drawing: Retracing Situationist Architectures from Constant’s New Babylon to Beyond, (2001) and was one of the founders of Volume magazine. He has curated exhibitions at the MoMA in New York, the Witte de With in Rotterdam, The Drawing Center in New York, and the CCA in Montreal. His forthcoming book is Buckminster Fuller Inc.: Architecture in the Age of Radio.

The Istanbul Design Biennial, taking place since 2012, aims to bring together a diverse cross section of design ideas, exploring a wide range of fields concerning design.

The conceptual framework of the 3rd Istanbul Design Biennial, organized by the Istanbul Foundation for Culture and Arts from 22 October to 4 December 2016, will be announced at a press conference in December 2015 by the curators Beatriz Colomina and Mark Wigley.