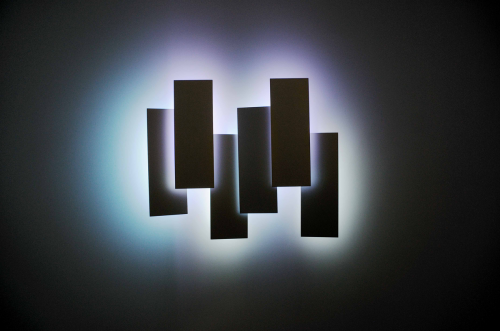 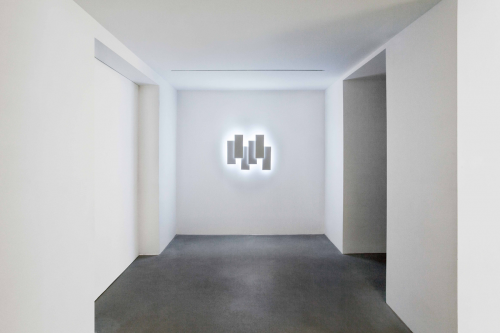 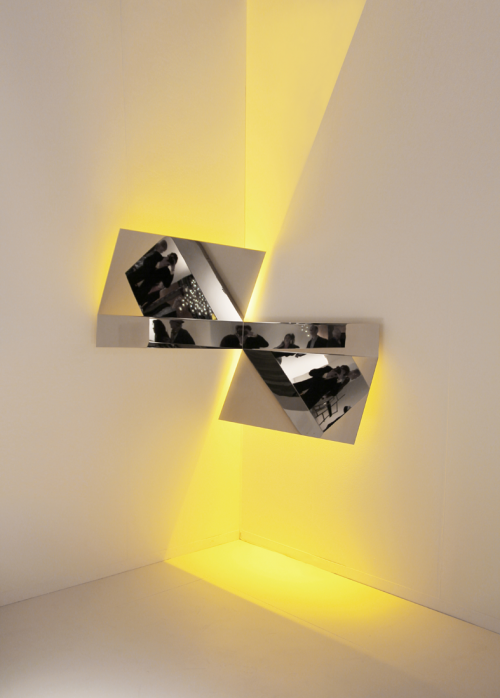 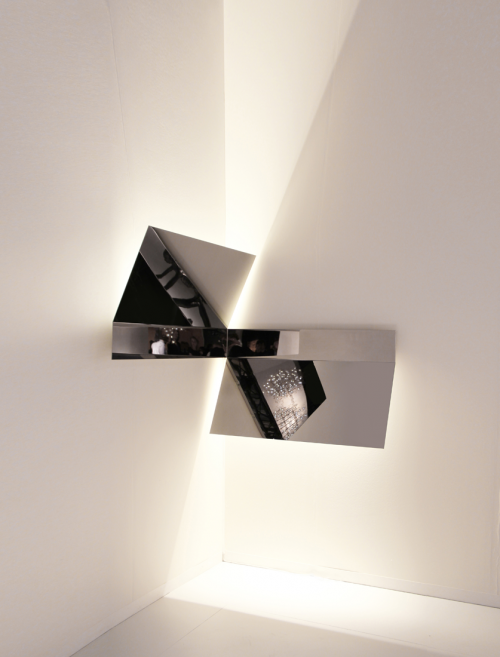 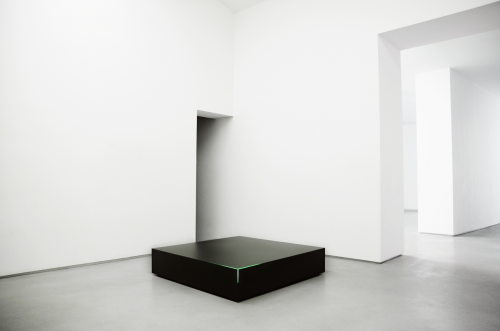 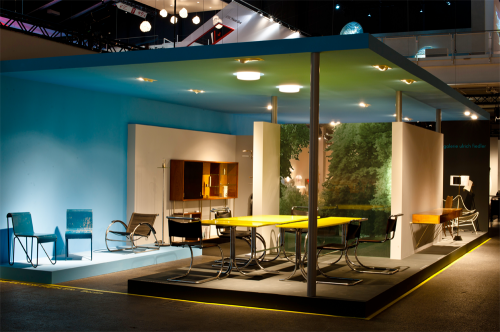 The sixth edition of Design Miami/ Basel saw a significant increase in sales and attendance throughout its five-day run in Basel, Switzerland June 14-18, 2011. Collectors, curators, critics, designers and enthusiasts from around the globe descended upon the fair to see stunning presentations of blue-chip historical and contemporary design, alongside new commissions from emerging designers.

Design Miami/ Basel’s audience of design devotees enthusiastically navigated the fair’s new layout, arranged in a “scatter” pattern by New York-based architects ArandaLasch. The arrangement embraced spatial eccentricities as a way to encourage guests to move about the show in an entirely new way. In addition, thousands of people from over 130 countries followed the unfolding of the show on the Design Miami/Basel blog.

“With this year’s fair, Design Miami/ Basel has once again demonstrated that it is the world’s most important destination for 20th- and 21st-century collectible design,” said Marianne Goebl, Director of Design Miami/. “The caliber of works shown in the gallery program combined with our strongest sales figures to date stand as a testament to the maturity and quality of this year’s show.”

First time participants Galerie Ulrich Fiedler, presenting work from Bauhaus and de Stijl movements, and Galerie Doria, specialized in work by the Union des Artistes Modernes, were enthusiastically received and complemented the early 20th century offering at the fair. Their sales include a Carlo Mollino chair for €100,000 and the Monofilio chair by Conti/Grassi/Forlani for €35,000 at Ulrich Fiedler and a table by Pierre Chareau for an undisclosed sum at Galerie Doria. Art Deco Galerie Anne- Sophie Duval from Paris sold a pair of Albert Giacometti wall scones and several pieces by Jean-Michel Frank for undisclosed amounts. 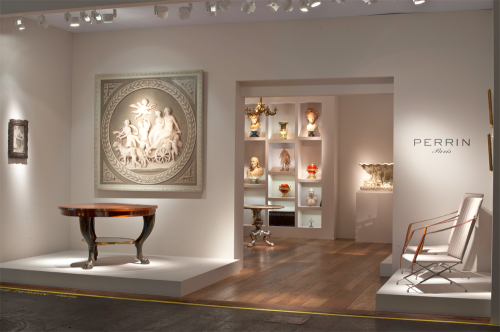 Going even further back in history, Paris-based Galerie Perrin (above) sold furniture developed for the Napoleonic campaigns, including a set of two chairs for €45,000 each and a day bed for €100,000. 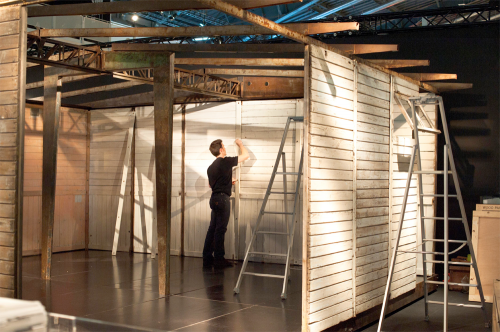 Rare architectural structures by Jean Prouvé were also amongst the highlights of this year’s fair. Galerie Patrick Seguin (above) presented a museum-quality exhibition of Prouvé’s pre-fabricated structures, including a stunning design performance: a 6x6m demountable house from 1944 was mounted in front of the visitors every day of the fair, revealing the intelligence and beauty of the structure.

Seguin sold Prouvé‘s Salle a Manger, for €140,000 to an American collector and two stools by Pierre Jeanneret for €10,000 each to a collector from South America. 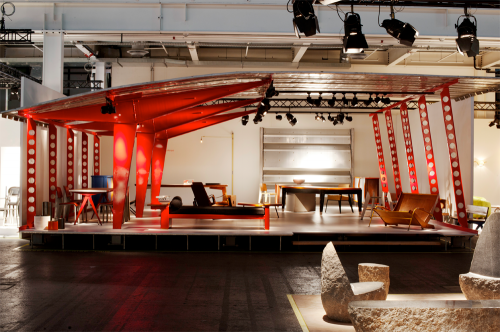 In a booth partially constructed from a schoolhouse designed by Jean Prouvé in 1957, the Paris-based gallery Jousse Entreprise (above) sold a Pierre Jeanneret table for €150,000 and a Charlotte Perriand table for €28,000. 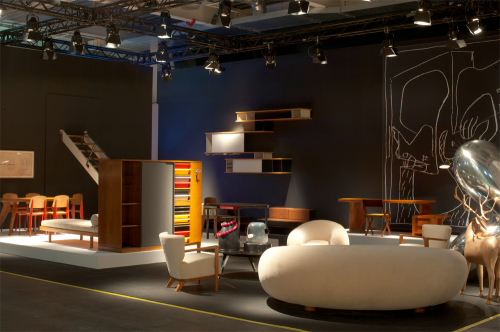 Continuing the trend of strong sales for French design from the 1940s and 1950s, Galerie Downtown François Laffanour (above) sold a Jean Prouvé table and six chairs to a Swiss collector for €120,000, and Galerie Jacques Lacoste sold a Jean Royere Ours Polaire sofa, armchair and pouf for €750,000 to an American collector. 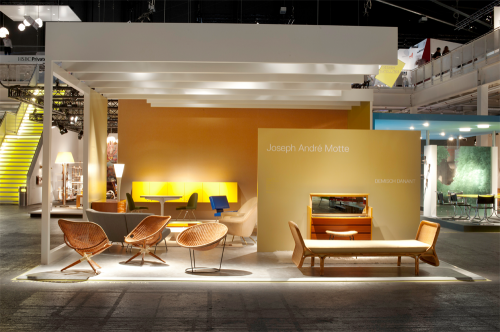 Solo shows allowed the visitors to gain deeper insights in the work of specific designers. New York-based gallery Demisch Danant (above) dedicated its presentation to the French post-war modernist Joseph André Motte and sold a pair of leather chairs (€26,000) as well as a pair of floor lamps for an undisclosed amount, amongst others. 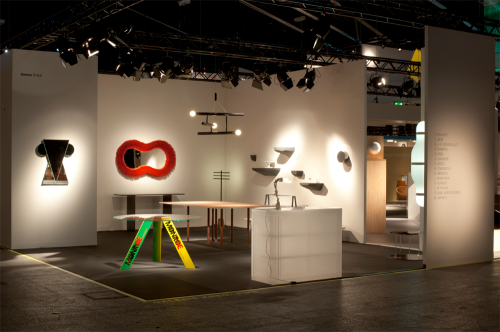 Galerie kreo (above) from Paris sold a bench and console (€28,000 each) as well as a coffee table (€24,000), all from the newly commissioned solo show by Pierre Charpin. The gallery also sold the Frozen Cabinet by Studio Wieki Somers for €38,000 and Konstantin Grcic’s Monroe Champion for €36,000. 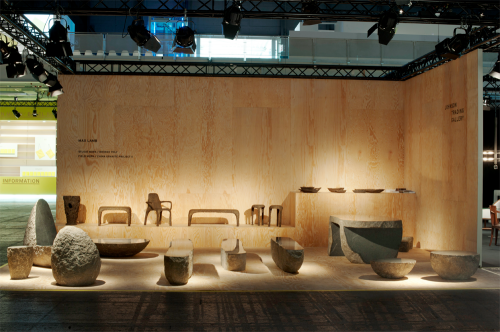 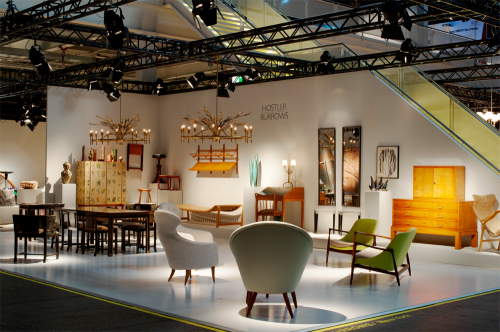 Design Miami/ Basel 2011 featured a high number of work with provenance from private and public commissions. Hostler Burrows (above) saw a number of strong sales including a chandelier by Pavo Tynell ($50,000) that was a commission for the Helsinki Stock Exchange. R 20th Century from New York City sold a private commission by Joaquim Tenreiro for an undisclosed sum, as well as a rare dresser by Greta Magnusson Grossman for $60,000. 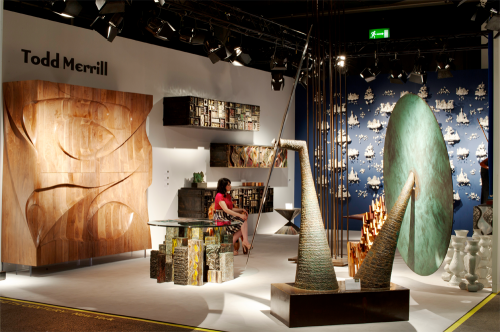 Todd Merrill Twentieth Century (above) sold a number of pieces including a towering Harry Bertoia gong sculpture, originally commissioned for a Norwegian music hall, to a Chinese artist/collector for an undisclosed sum. 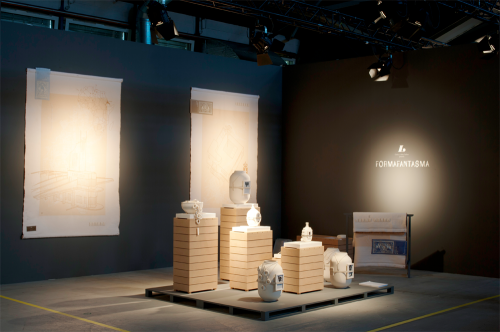 Exhibitors of the Design On/Site program, dedicated to solo shows of cutting-edge contemporary designers, will see their work go to institutional and private collections alike. Particles Gallery sold an Aldo Bakker stool to the Vitra Design Museum. The blankets of Formafantasma’s Colony series, presented by Gallery Libby Sellers (above), will be integrated in the permanent collection of the Dutch Textile Musem in Tilburg. And first-time participant Galerie Maria Wettergren received a number of site-specific commissions for Astrid Krogh’s high-tech textiles. 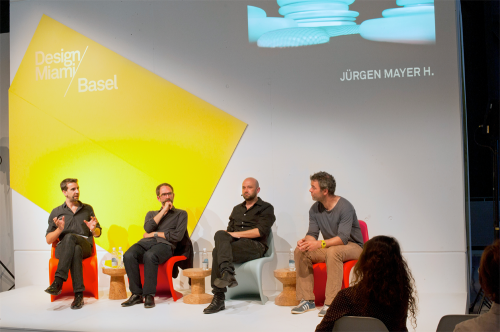 In addition to the gallery program, a regular highlight for Design Miami/ Basel attendees is the fair’s Design Talks, which shed light on topics at the intersection of art, architecture and design. This year’s talks included “The Power of Patronage: Pushing Boundaries through Private Commissions” with participants Alexander S.C. Rower, Max Lamb and Felix Burrichter; “Freedom and Function: Diverse Approaches to Design” with Jonathan Monk, Jürgen Mayer H., Piet Hein Eek, and Joseph Grima; and “Designers of the Future: Conversation Pieces” with Asif Khan, studio juju, mischer’traxler and Joseph Grima. 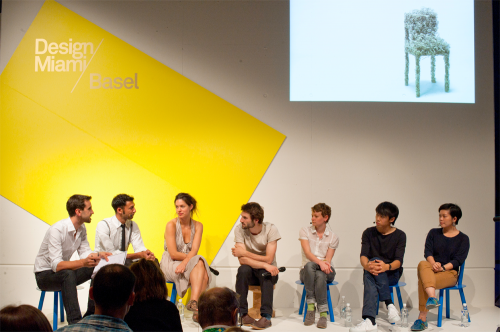 The 2011 “W Hotels Designers of the Future Award” winners (above), Asif Khan/UK, studio juju/Singapore and mischer’traxler/Austria, stunned the visitors with their site-specific interventions, spanning from an artificial cloud to a tent-structure and a machine, which activated itself to produce a basket when shown attention by the visitors.

Design Miami/ Basel confirmed once again that it is the only fair that can assemble the highest caliber of international design galleries for an audience of experienced as well as new collectors. With a unique presentation spanning collectible design from around the world, the June 2011 show proved to be the most successful in the show’s history.

about design miami/
Design Miami/ is the most prominent and substantive forum for collectible design, representing a convergence of commerce and culture. Its annual shows in Basel, Switzerland (June) and Miami, USA (December) bring together the most influential galleries, collectors, designers, critics and curators from around the world. [ details ]

Design Miami/ Basel is presented in partnership with HSBC Private Bank, whose dedication to innovative international design is an example of its emphasis on the value of connections. [ details ] 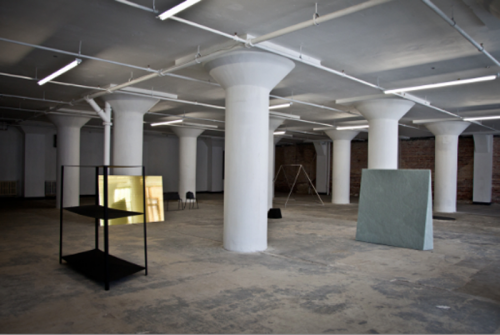 The talk by Jonathan Muecke is in conjunction with Open Objects, his first solo exhibition.
click on exhibition photo image to enlarge
Rather than a collection, Muecke considers each of the objects in the exhibition to be its own project, the result being that every one is consistent to its counterparts only in its potential – “a quality that is itself immeasurable”.

Muecke’s projects reflect  common forms of design and a continual pursuit of the meta-object. It is within this confrontation, between viewer and object, that development of new thought on functionality and materiality lives. Utilizing materials such as coal slag, glass sand, carbon fiber and gold foil, each piece works to remove our limitations of understanding and encourages the viewer to engage and interact. 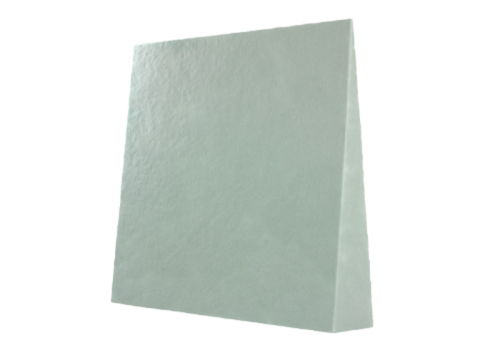 Open Objects represents Jonathan Muecke’s first solo exhibition, comprised of eight objects. The individual objects designed for Volume Gallery, were developed independent of each other. Rather than a collection, Muecke considers each object its own project, the result being that each object is consistent to its counterparts only in its potential – “a quality that is itself immeasurable”.

Leaving all to interpretation, Open Objects is a comprehensive study of each object’s unique qualities, and dissection of their definition. Muecke’s projects are a reflection of the common forms of design and continue to study the meta-object. His projects demand examination. It is within this confrontation, between viewer and object, that development of new thought on functionality and materiality lives. Utilizing materials such as coal slag, glass sand, carbon fiber and gold foil, each piece removes our limitations of understanding and encourages the viewer to engage and interact, rather than react to the object. 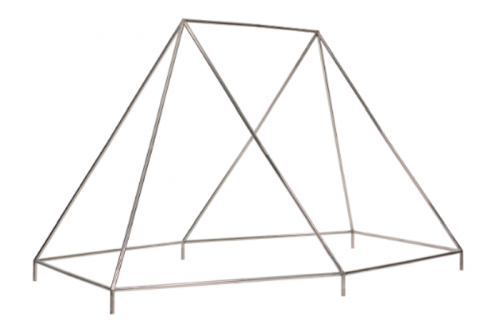 
“Principally, objects present limits– figured in function/process/material/form/idea and so on. In this case objects are measured to each variable and equally fixed in the variables. In this normal and productive way objects are figured backwards. My interest is going forward – remaining inconclusive to the terms of measurement. In this way potential remains in an object.”

Jonathan Muecke operates around the edge of design; he emphasizes each object’s conceptual purpose and universal meaning. Open Objects is his continual practice to un-define objects while defining something larger. Each object is restrained and composed in design, raw and visionary in intent. Each project in Open Objects is firmly tied together with the strong visual language that is inimitable, unique and undeniable.

Jonathan Muecke
Jonathan Muecke was born in 1983 in Cody, Wyoming. He works from his studio in Minneapolis, Minnesota since his graduation from the Cranbrook Academy of Art in 2010 where from 2009-10 he was the Florence Knoll scholar. In 2006 he received a Bachelors of Architecture from Iowa State University followed in 2007 by an internship at the architectural office of Herzog & de Meuron in Basel, Switzerland. In July of 2010 the jury of the Design Parade 5 (Hyéres, France) assigned him the Veuve Clicquot Award. His field of work circulates around the periphery of design.