[ Studio Job ] has been awarded best Dutch designer 2012, 2013, 2014 and now again 2015. We could show a wide range of visuals to highlight this span but the studio wanted to talk ‘car design’ a nd sent us the following. Salute. Again.

[ official release ] Land Rover to present the very exclusive limited edition Range Rover Evoque by Studio Job. The exterior and interior colours were selected in collaboration with the Studio Job design collective. The exterior features include finishing with design elements devised by Studio Job for the bonnet, the front mudguards and the doors.

Studio Job was founded by Job Smeets and Nynke Tynagel. The have made a name for themselves with numerous non-conformist objects at the cutting edge of design and visual art, varying from utterly unique furniture and the sculpture known as ‘CAR’ featuring the Evoque (2013) to their ‘Automobile’ creation of an extravagantly decorated Land Rover Defender. These were their first car creations, which they revealed in 2013 during the renowned PAN Amsterdam art fair, as an ode to Land Rover’s 65th birthday. It signalled the start of a partnership which has now resulted in the Range Rover Evoque by Studio Job. Although it is less extravagant than the Studio Job Defender, it is no less unique and challenging.

There are two versions of this Range Rover Evoque Coupé, namely the Job Evoque Bronze with polished bronze elements and the Job Evoque Black which features high-gloss black coated aluminium elements. The personalised features are the bonnet, mudguards, doors, roof spoiler, special hub caps and double exhausts. The name ‘Studio Job’ is emblazoned on the radiator grille. Inside the car, your attention is drawn to a relief signature by Studio Job on the 9-speed automatic transmission gear lever which combines beautifully with the ebony leather upholstery and the ‘Satin Brushed Aluminium and Gloss Black Strata’ inlay in the dashboard and the central console.

“The Evoque is a modern car in which everything is interwoven like a three-dimensional puzzle”, explains Job Smeets. ‘The concept is complex and slick. We have now created the perfect Evoque and its racing seats, panoramic roof and monochrome colour scheme make this coupé even more out of this world. We have replaced some parts with hand-crafted parts cast in bronze or aluminium, directly from our studio. This gives the car an even stronger identity. This Evoque is a future classic. 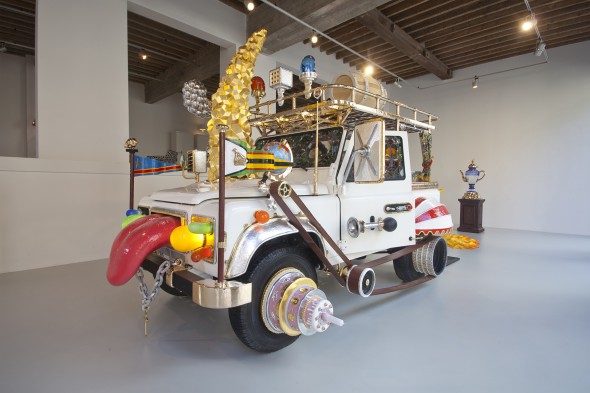 [ a haute couture car ] For a designer, one of the most prestigious commissions is the design of a car. Preferably for a famous brand or for an iconic car. Designing a car means you’re successful! There are several examples of this, but I will only mention the Ford by Marc Newson and the recent Renault by Rose Lovegrove. Almost always these become ‘concept cars’. A styling exercise at the highest level. The cars look like they have come from Mars, have various futuristic and practical gadgets and high-end ingenuities which the design team of the respective car brand can truly admire… at least, that seems the purpose. Sometimes beautiful, often magnificent, but often filled with promise!

When Nynke and I spoke with Land Rover about the icon of Land Rover, the Defender, which now officially reaches pensionable age, everything that’s described above was exactly what we didn’t want. It should not become a stylistic exercise, no beautification, no gadgets, nothing futuristic. We wanted a JOB Land Rover that’s here and now. A sculpture of today!

It all got totally out of hand! The moment that black lady entered our workshop, inspiration started to flow out of our ears. One idea after another. This Land Rover had to cross the world of Studio Job, dig up her own past and also take with her the most exotic and conflicting elements of the African continent on her freaky journey.

This Land Rover became a rolling cabinet of curiosities. The mysterious car that Doctor Snuggles always wanted to have. It’s the Queen’s car, but also the throne of a chieftain, and at the same time a mechanical rhinoceros, a freak show. An autonomous caricature for the leading part in a video by a leading pop star…

People, this Defender has become everything it could have become. Like a cubistic art piece with various perspectives. It is chaotic and bizarre as life itself. It certainly isn’t a stylistic exercise from the design bible, but definitely a rudimentary work of art, conjured from the high hat – also the controversial palette – of Studio Job. An anti-hero that anticipates itself. A diary and a mirror. 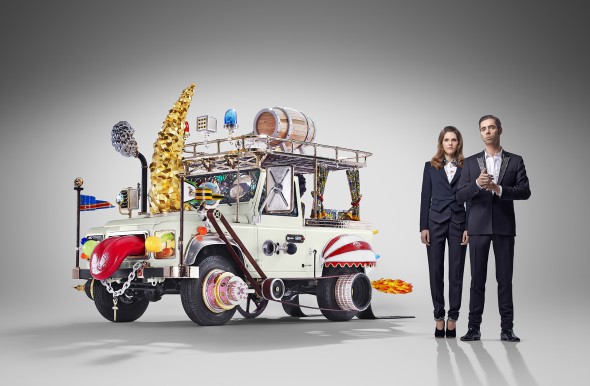