curated by xristina argyros and ryan neiheiser (neiheiserargyros.com), and entitled the school of athens the project examines the architecture of universities and academia around the world, focusing on the common spaces outside of the classroom, and addressing their importance as informal spaces of debate, exchange and ultimately, learning. the curatorial duo reimagines the greek pavilion as its own kind of learning ‘freespace’, adopting the architectural trope of the stepped landscape. dotted around the stepped elements, almost 60 3-d printed architectural models of common spaces within academic buildings, both realized and non, will be on display. the models include spaces across the five continents, and across history, in recognition of the common space – un-programmed spaces for impromptu conversation, casual gossip, heated debate, pop-up lectures networking and informal teaching – as vital to academia’s continued relevance and vibrancy. spaces that demand and deserve intelligent critique and update. the project is delivered in collaboration with architectural courses at architectural association in london and the university of athens.

the exhibition curated by six young architects and designers, examines the role of markets in rural irish communities, their gradual demise and their importance for economic and social engagement. during the biennale the pavilion will be transformed into a rural irish market square, complete with market stalls, goods, soundscape and a daily newspaper with a range of contributors. after the biennale the exhibition will return to ireland touring small towns around the country gathering new stories and participants.

Peter Eisenman with his firm Eisenman Architects and Aytaç Architects collaborate to create The Yenikapi Transfer Point and Archaeological Park in Istanbul. The design for the historic site includes a park, an archaeological museum, and a transit building adjacent to the new underground rail hub, construction of which uncovered important artifacts from the Roman and even neolithic eras. The project is introduced by Zuecca Project Space, their first architectural presentation, during the 14th International Architecture Exhibition – La Biennale di Venezia.

Through the presentation in Venice, curator Maurizio Bortolotti highlights mercantile trade links between Venice and the 1600 year old former Theodosius Port in Yenikapi, where the remains of 35 ships will be displayed as a main feature of the Archaeological Museum. On the Historic Peninsula, the Yenikapi area helps to bridge the European and Asian sides of the city. For its first architectural presentation Zuecca Projects breaks new ground in its continued research into the unique Eastern-facing cultural history of Venice and examines how this connects with contemporary art and architecture. 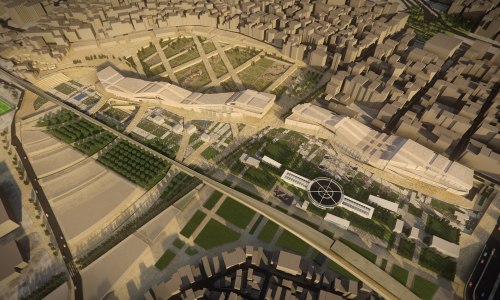 The project concept consists of three fundamental aspects: urban vision, urban design, and architectural design. The exhibition in Venice is split into four quadrants, including drawings, models, the ongoing urban design and archaeological museum projects, as well as images and animations of an installation of the archaeological excavations still underway.

Internationally renowned architect and educator Peter Eisenman’s work is characterized by a deconstructivist approach, notably in his collaborations with post-structuralist philosopher Jacques Derrida. His interest in the architectural strata of Venice is well documented and The Yenikapi Project draws on the relationship between his projects for Venice and Istanbul. All images courtesy Eisenman Architects e Aytac Architects. 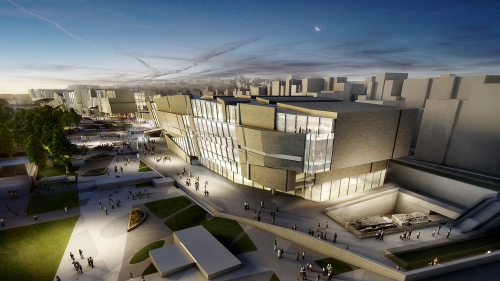 above> Aerial view at the sunset of Yenikapy, toward West.The stone pier from Theodosian Era will be preserved and exhibited in the square. Image by Moka-studio. 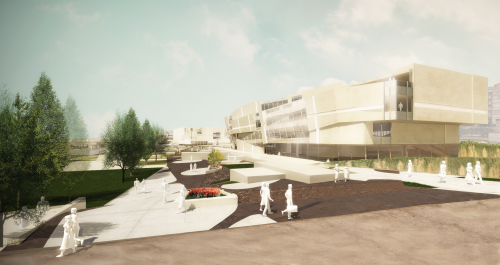 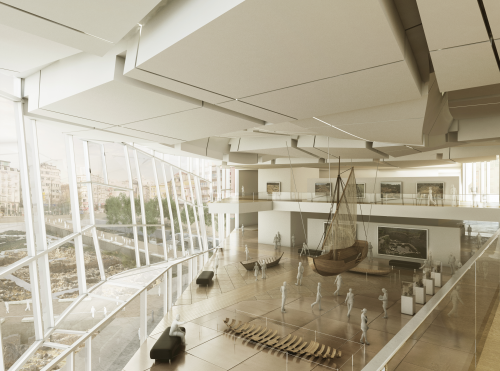 above / below> the gallery of the wrecks, Building B of the museum. Image by Parsa Khalili.
<br clear="le 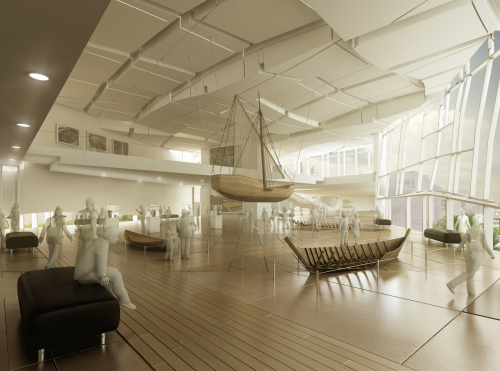 elevation of ‘building A’ in the museum complex

The Zuecca Project Space exhibition is located at the Complesso Delle Zitelle, on the island of Giudecca in Venice. It runs from 7 June > 23 November 2014, and is open every day, except Mondays, from 10a > 6p.