structure, the second exhibition of contemporary norwegian craft and design at milan design week, put the scandinavian country on the map.

showcasing the work of 26 designers or design studios from norway, structure was a collaboration between four norwegian organizations: design collective klubben, contemporary craft resource norwegian crafts, the norwegian centre for design and architecture, and norwegian paint company jotun, who provided a colorful backdrop from which the work could shine. the show, in milan’s ventura lambrate, was curated by renowned interior stylists jannicke kråkvik and alessandro d’orazio and editor in chief of swedish design magazine resident, hanna nova beatrice. “structure aims to bring together the best of contemporary norwegian creativity,” says a statement from the team, “…and foster ground-breaking collaborations and manufacturing partnerships, in a single state-of-the-nation exhibition that exists at the intersection of design, craft and art.” 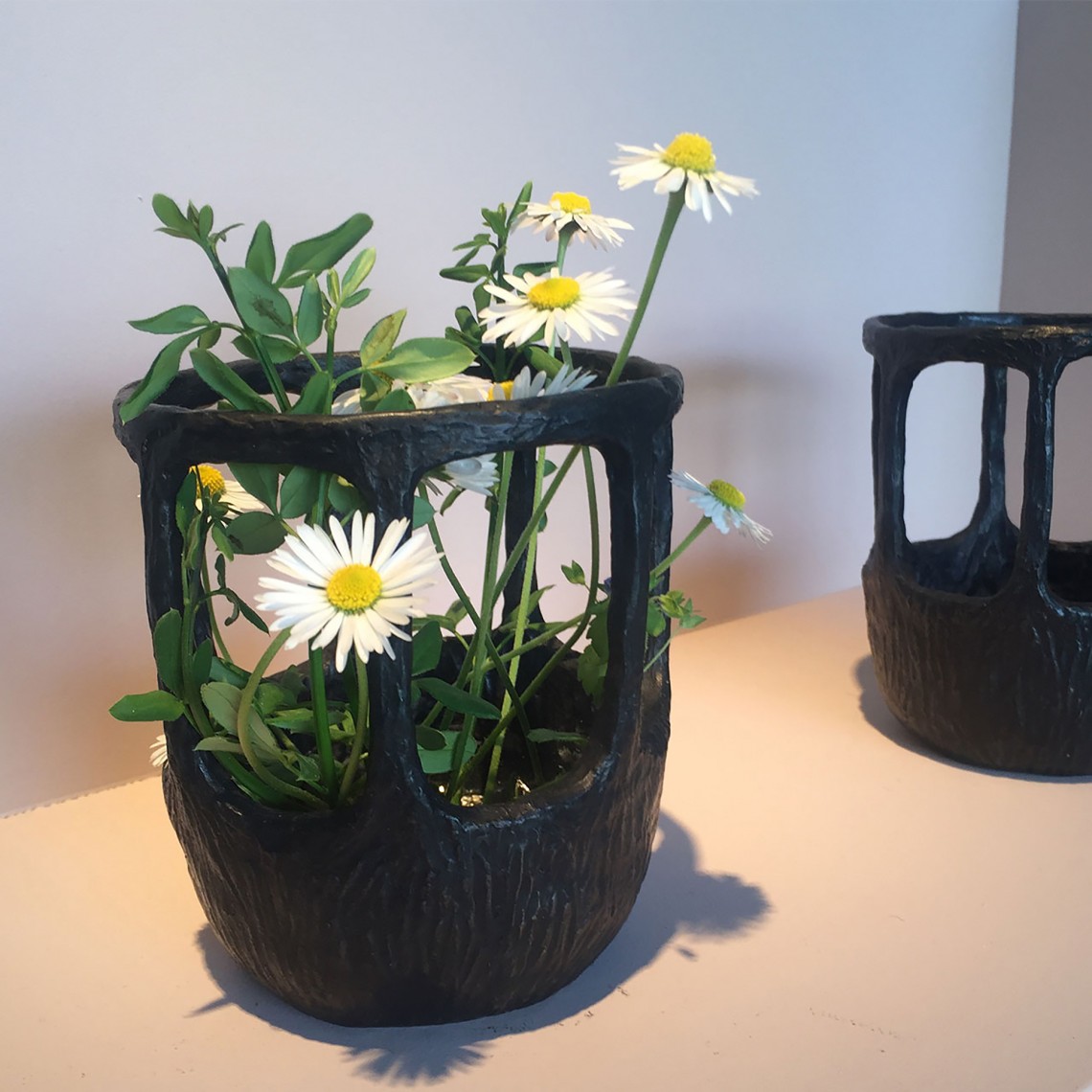 above> twice ‘norwegian designer of the year,’ and one of norway’s most experienced designers, andreas engesvik, created vigeland for the exhibition as a personal response to oslo’s sculpture garden by the same name. the vase is made from patinated bronze using a method called ‘lost wax casting’ in which the piece is first made from wax, a mould is formed around it, and then the wax is melted away and replaced by molten metal that forms the final piece. 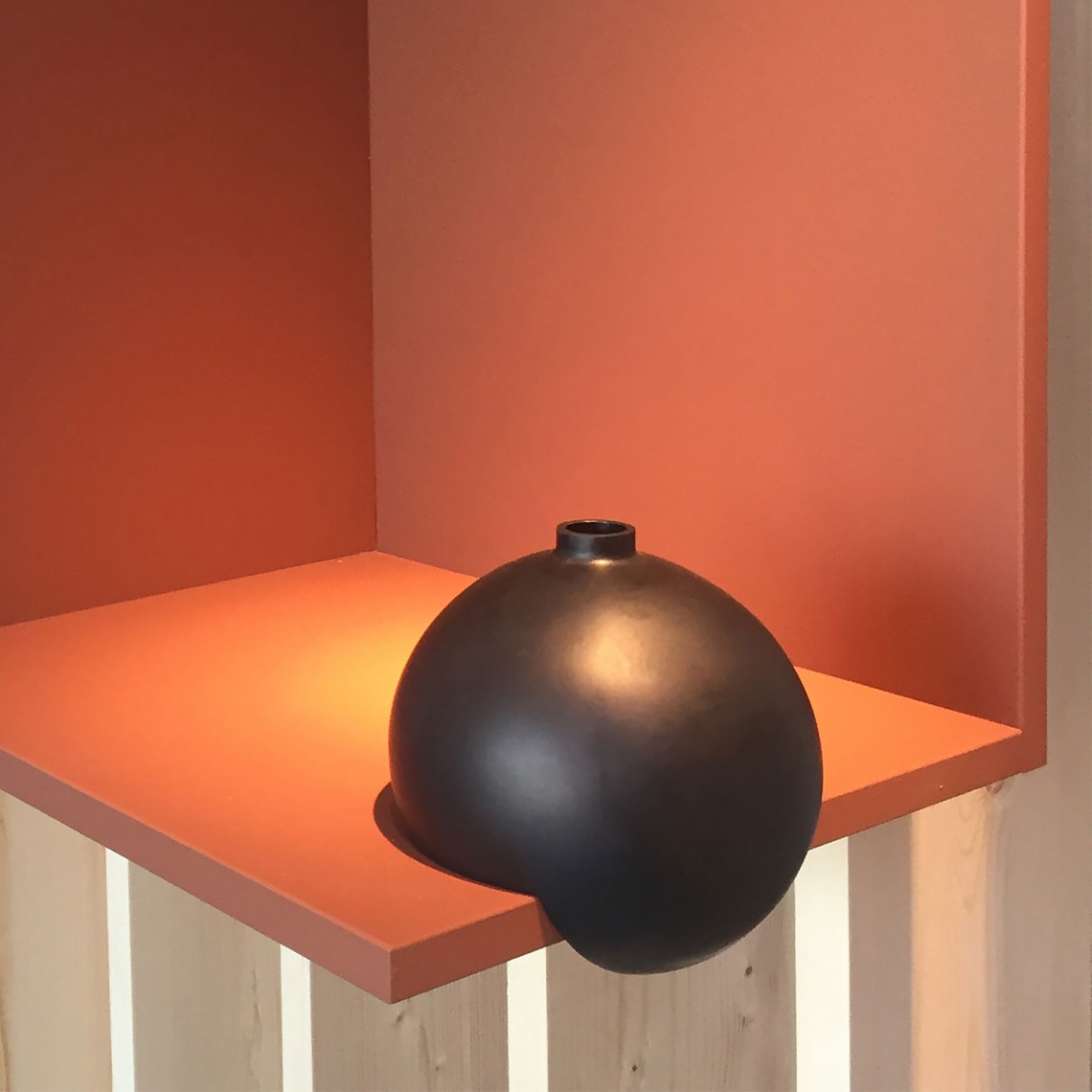 tumble by new designer falke svatun is a spherical stoneware vessel with a cut-out section in the base which allows it to sit over the edge of a shelf or cabinet, challenging perceptions of the solid form. 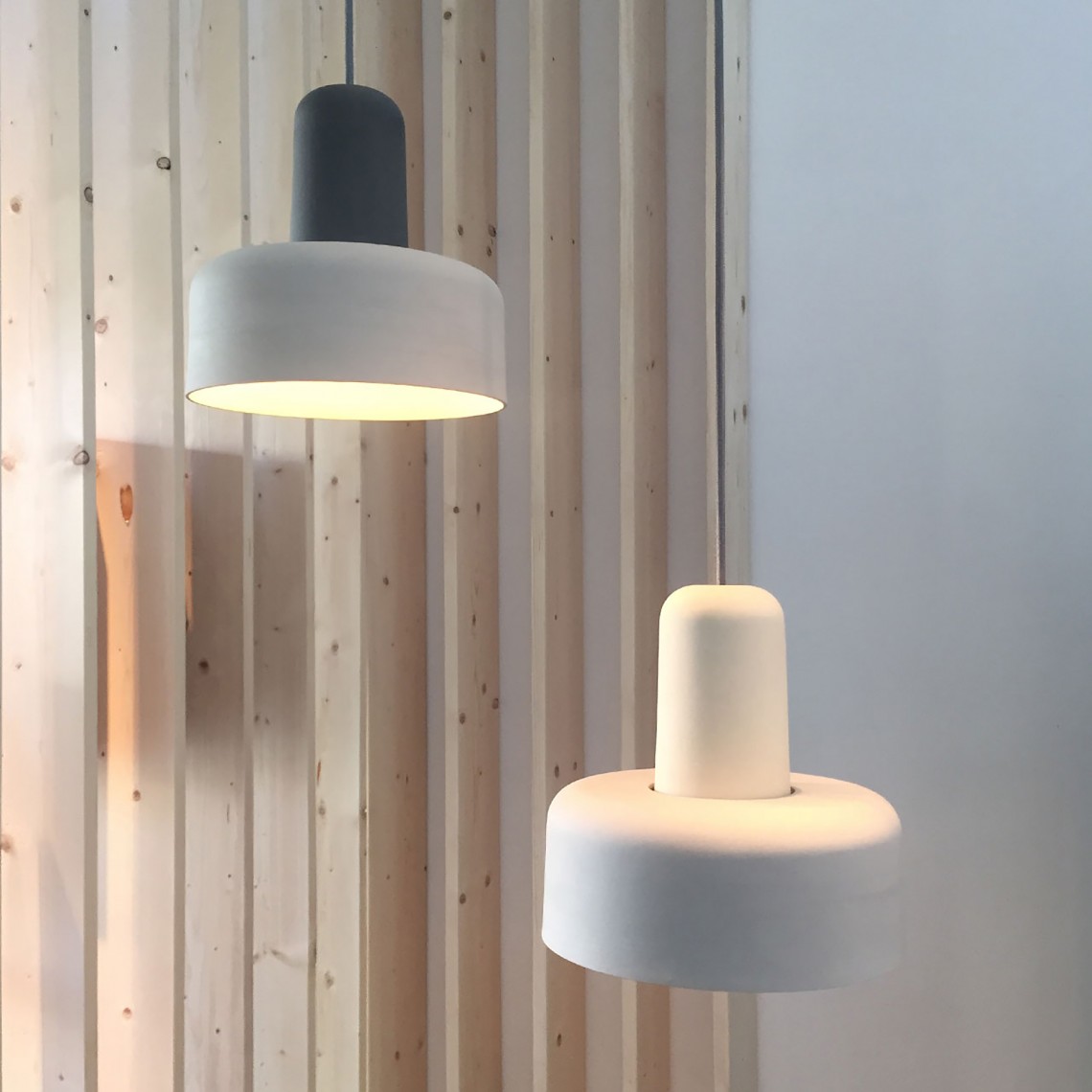 also challenging perceptions were noidoi, a design team established in oslo in 2013 by kathrine lønstad and cosmin cioroiu, who created meld. the pendant light is made from cast stoneware, and designed to present a familiar material in an unexpected context. the lights can be hung alone or in pairs or groups and cast a focused beam of light, making them ideal for hanging above dining tables or work surfaces. 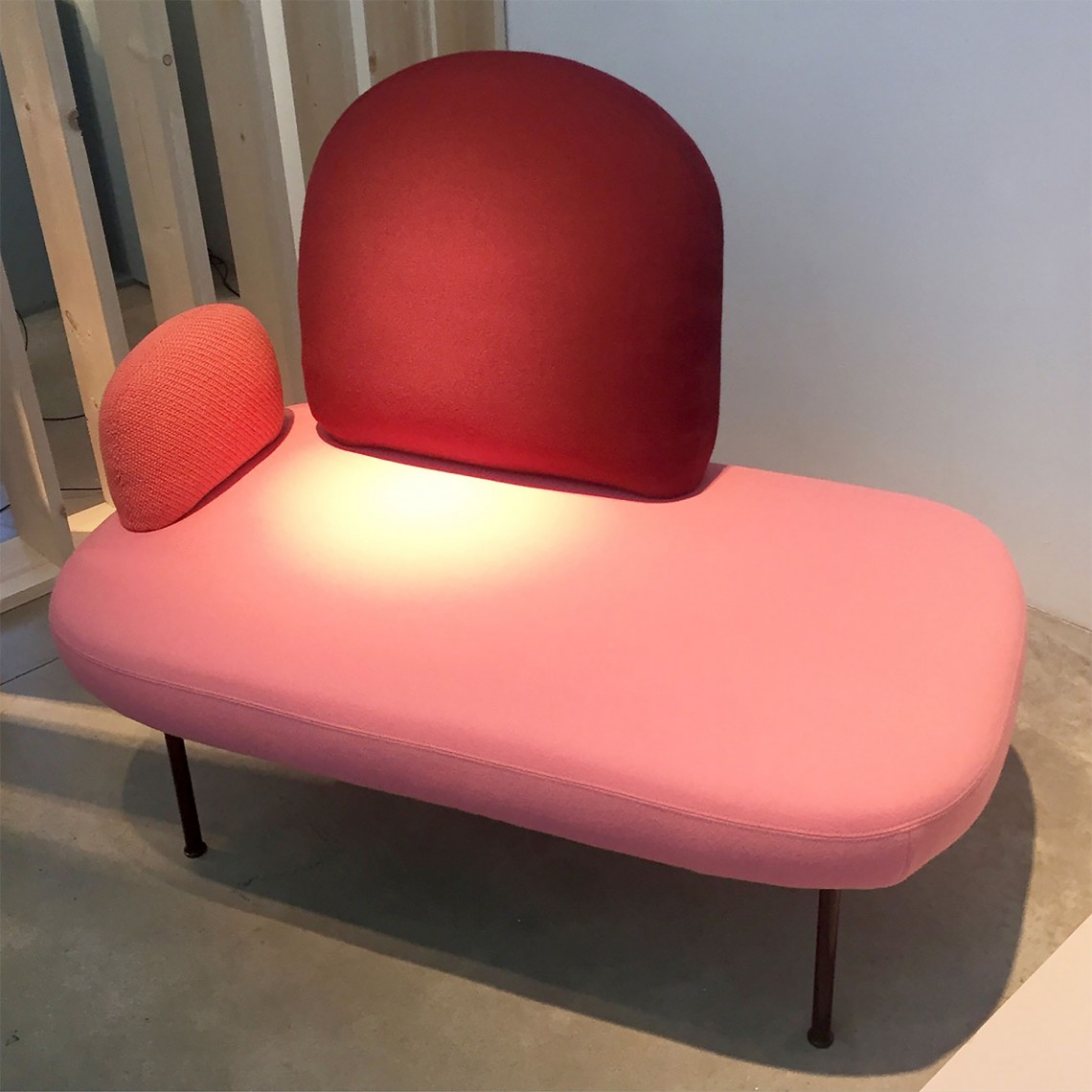 above> sara wright polmar’s between is neither a sofa nor an armchair, but something in between. “between facilitates different ways to sit alone or in the company of others,” she says. this piece is a prototype and in manufacture users will be able to choose fabric combinations to create different looks. 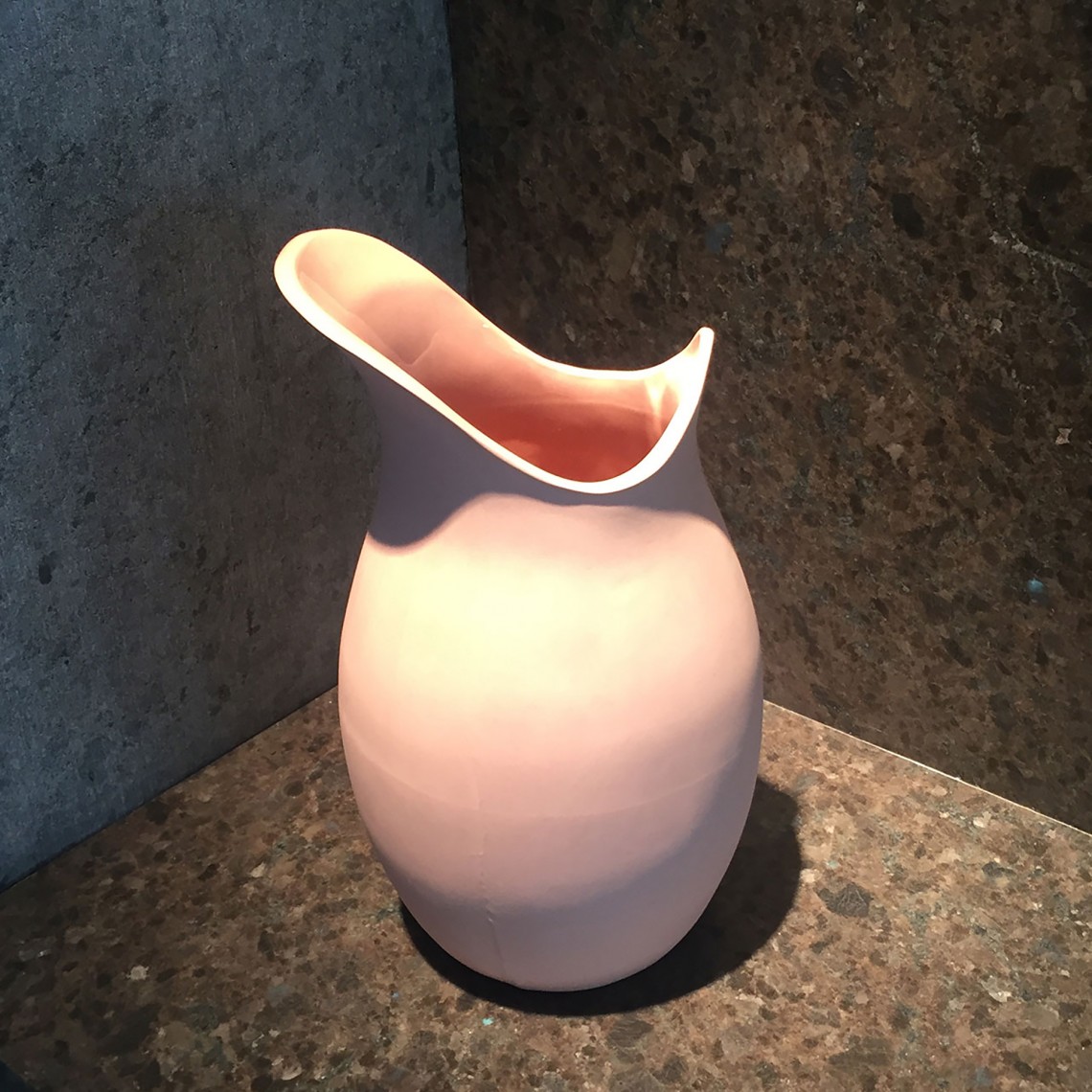 above> having launched an innovative range of textiles at the london design festival in september, the multi-talented design duo günzler.polmar (sara polmar and victoria günzler) has now turned to ceramics. pour is inspired by ancient and archetypal water pitchers and basins. the cast porcelain pitcher, glazed on the inside only, creates a contrast with the rough stoneware basin. 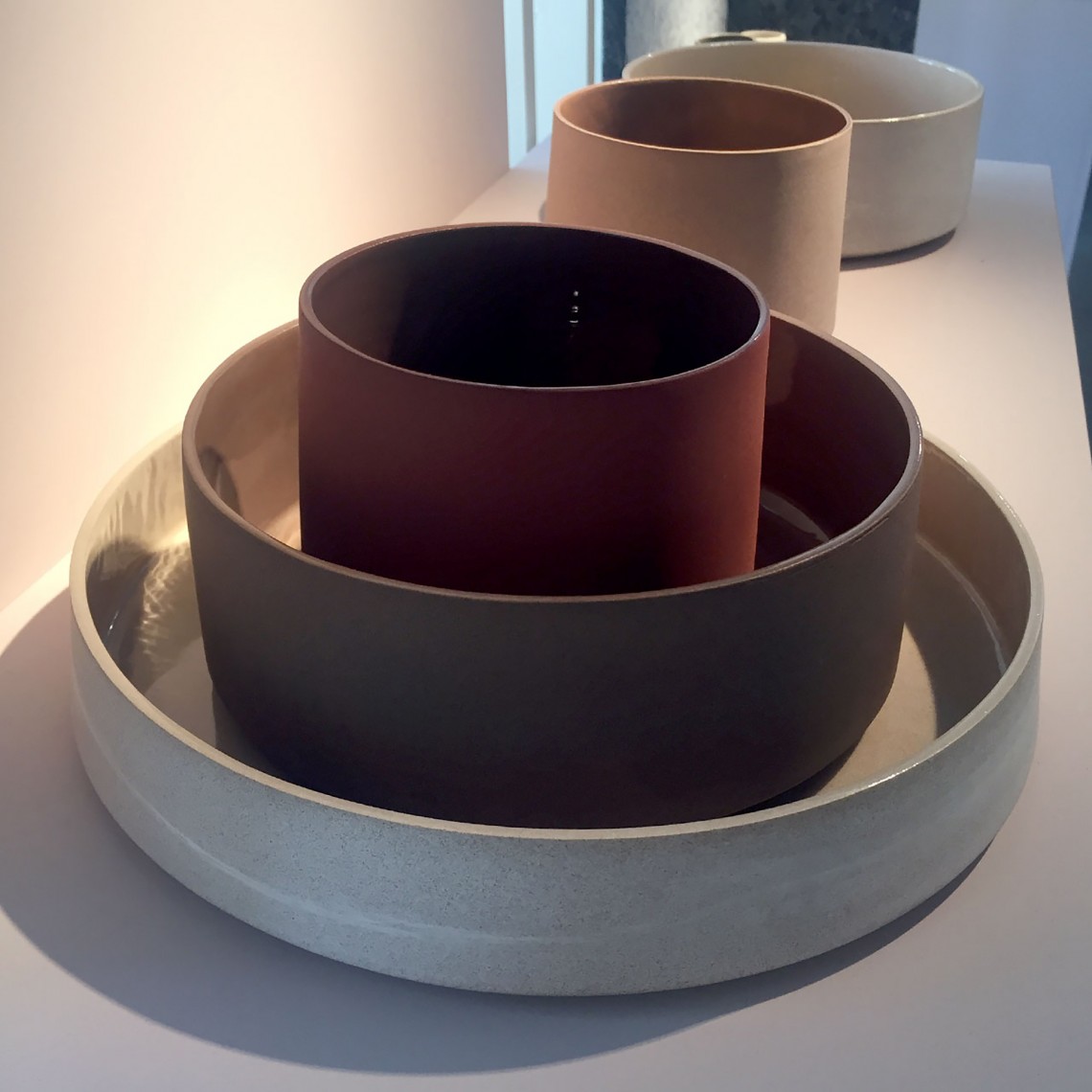 yet more beautiful ceramics, this time from ann kristin einarsen: stilleben is a collection of ceramic bowls and pots, again glazed only on the inside, which has been designed to be as simple as possible. the minimalist forms and understated colour palette enable them to stand alone or be used in combination with each other. 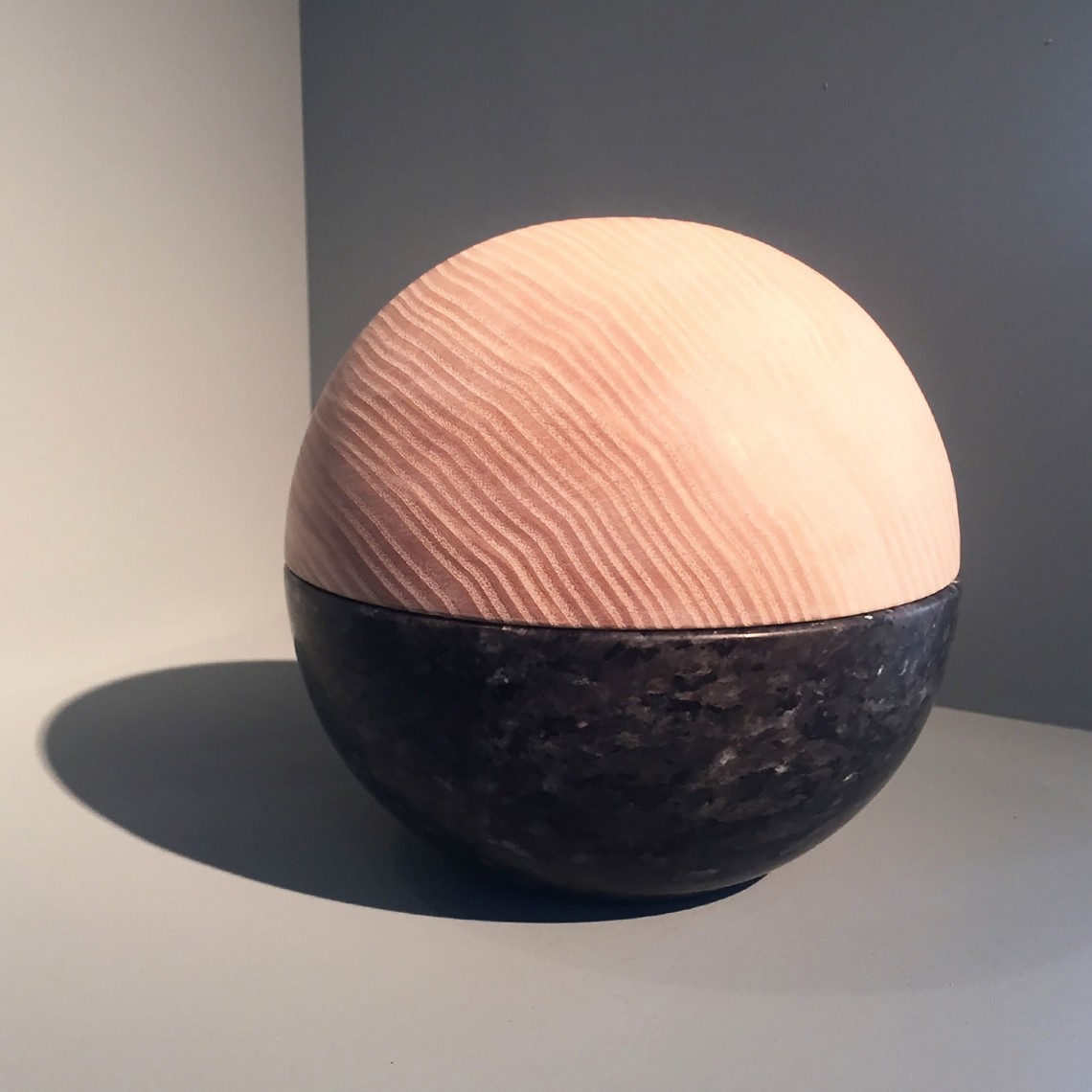 kristine bjaadal’s sfera is a spherical container made from larvikite or ‘blue pearl granite,’ a material only found in norway and canada, and turned ash. “i find the human inclination to collect memories and keepsakes fascinating, and throughout the last few years i have often returned to work with different kinds of containers,” says kristine. “a container keeps something. it could be something as trivial as beans, coins or cotton pads – a purely practical function; or maybe the container is used to keep objects you love, and in this way keeping your memories.” 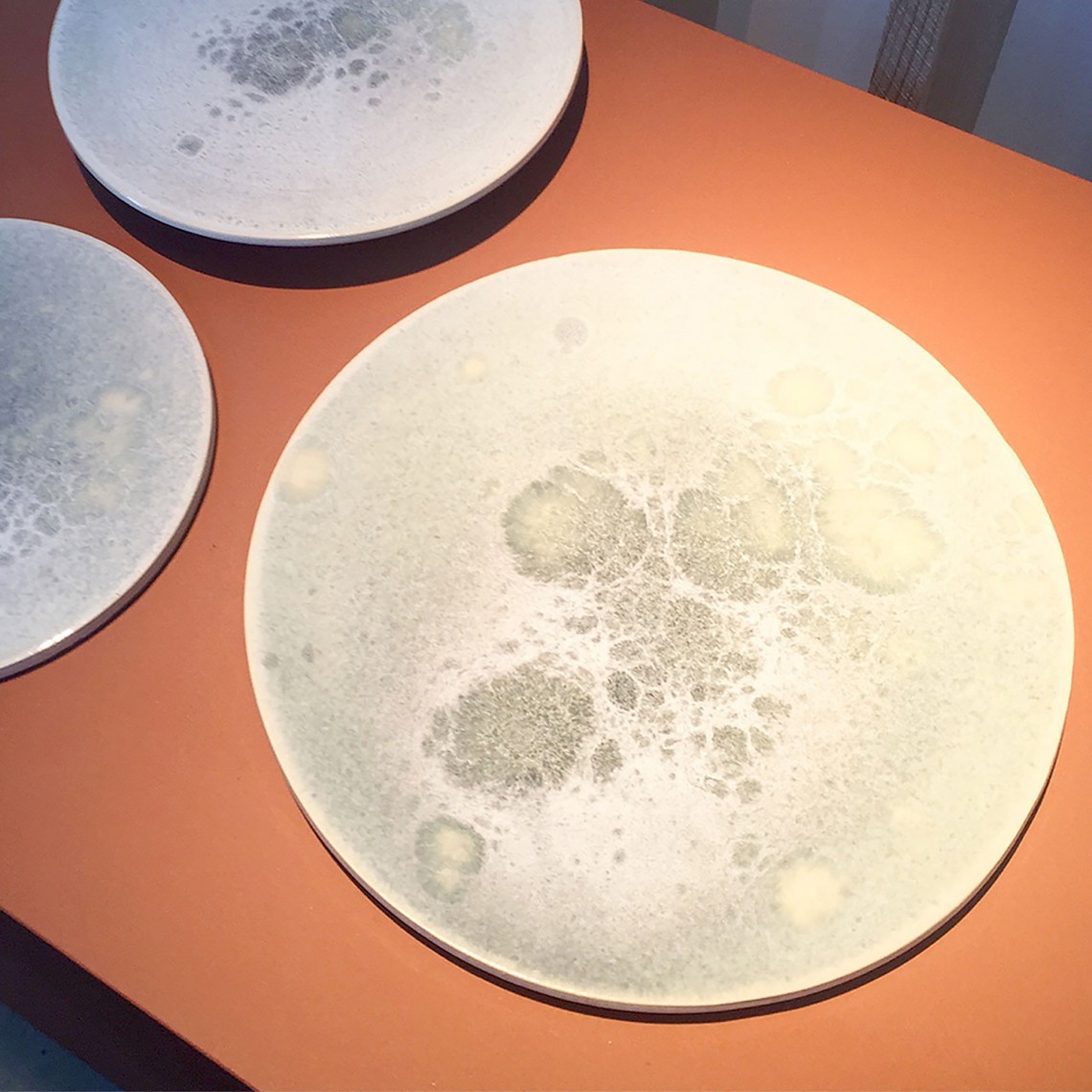 above> oslo-based interdisciplinary artist and designer anette korgstad created her steinlav collection to resemble the lichen common to rocks and trees in the norwegian countryside. the hand-thrown stoneware platters are glazed three times to create the desired effect. 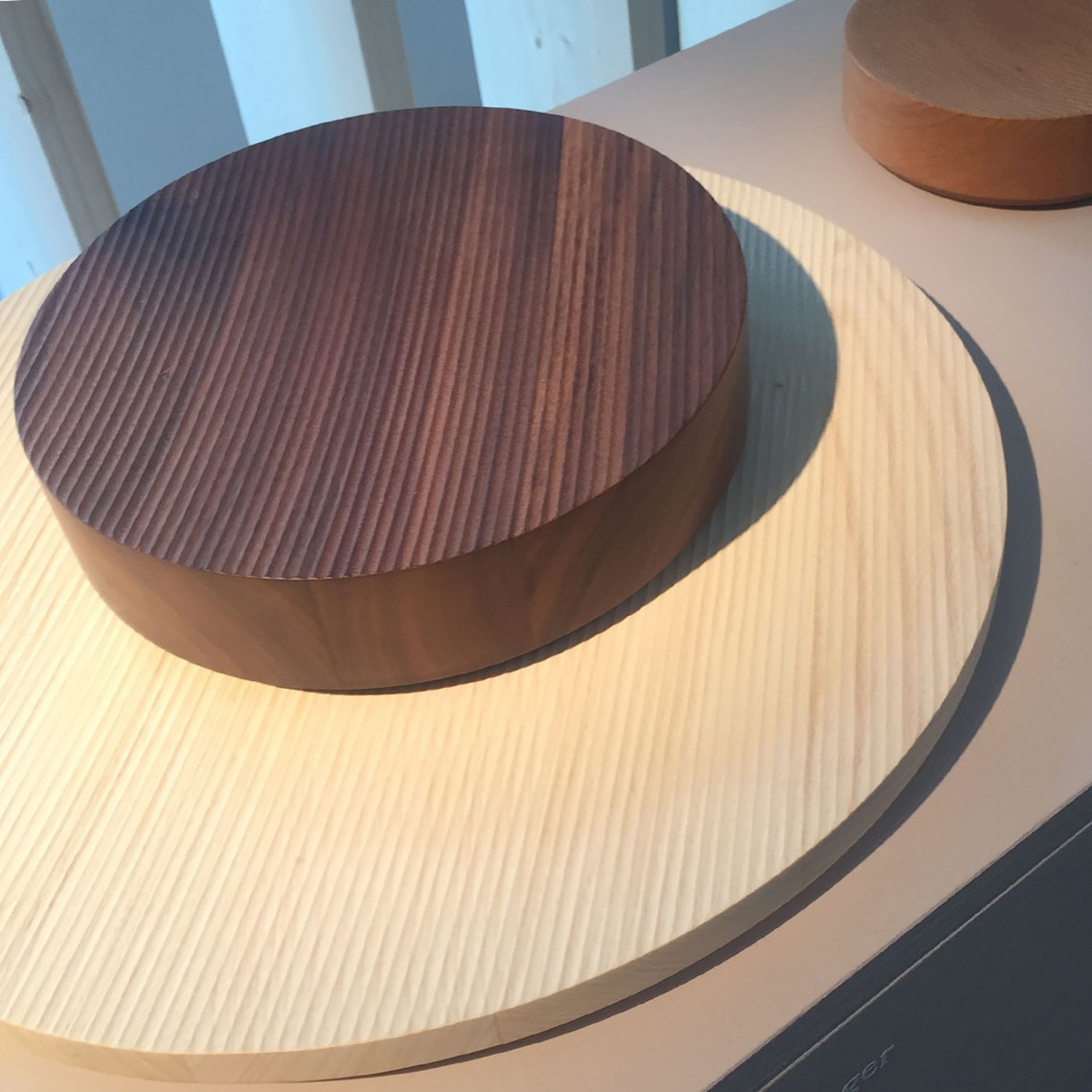 above> product and furniture designer sverre uhnger conceived trace, a collection of wooden trays and platters, in order to imbue digitally manufactured objects with a ‘trace’ of their making process. whereas hand-made objects often carry the marks of their maker, the grooves left by cnc (computer numerically controlled) machinery are usually removed. 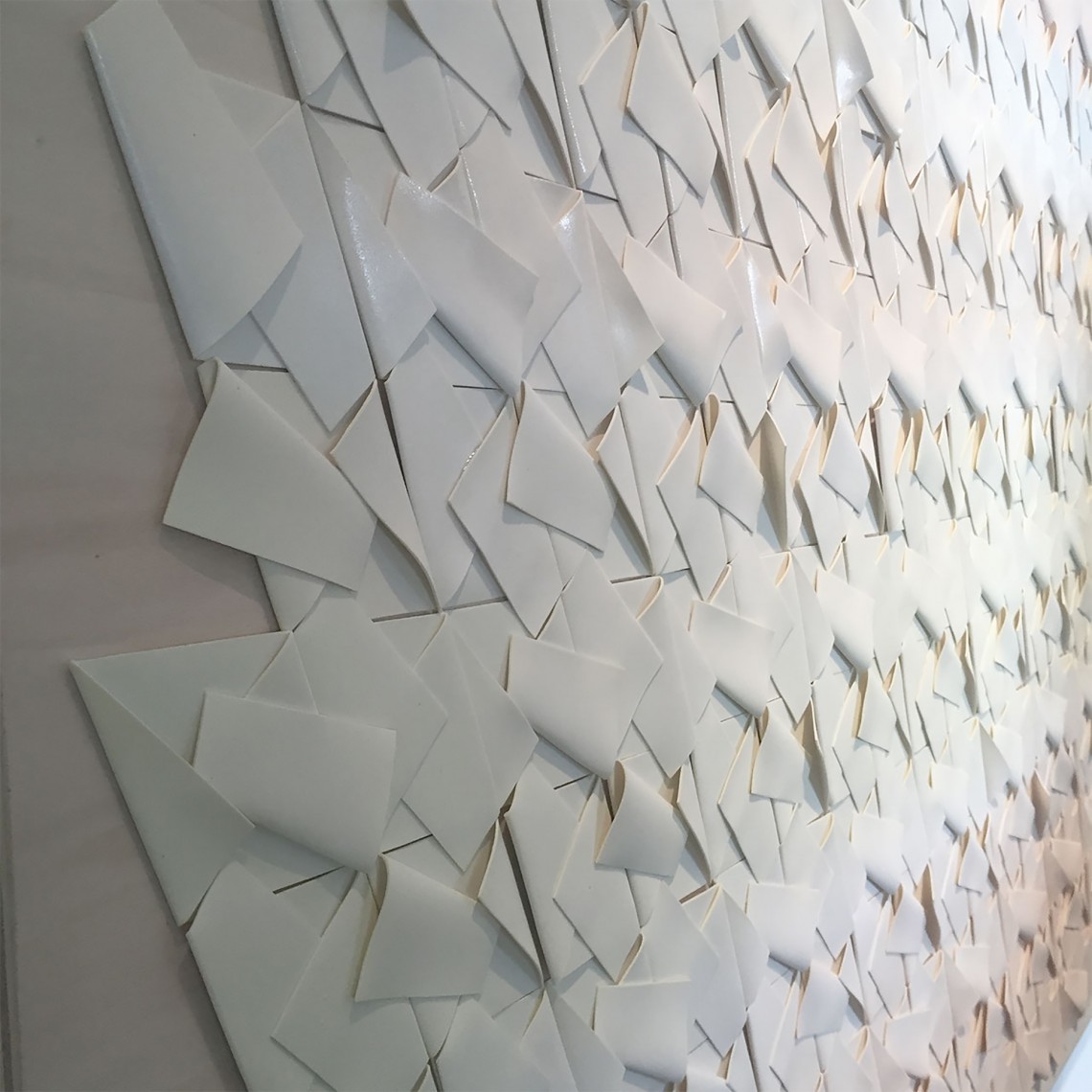 and finally, christina peel’s untitled project: christina meticulously folds wet porcelain squares, like origami paper, and then tessellates them together to create art pieces that play with idea of repetition, shadows and fragility.