1972 was the last time last we visited the moon via the apollo moon mission. almosst 50 years later nasa has selected blue origin, dynetics and spacex to move forward with development of human-rated lunar landers, committing nearly $1 billion in funding for a range of moonship concepts that include a variant of spacex’s next-generation starship vehicle.

“these are three companies that we believe have a lot of capability that are going to enable us to get to the moon,” said nasa administrator jim bridenstine. “each one of them is very different. they have all proposed something very different and unique, which has a lot of value to us.”

above > artist’s illustration of blue origin’s lunar lander with an ascent stage, and astronauts on the lunar surface. credit: blue origin

nasa said blue origin’s contract is valued at $579 million, and dynetics will receive $253 million for the 10-month contract base period. that money covers just the first phase of a multi-year lunar lander development effort that nasa predicts could cost $18.4 billion through the end of 2024.

the $135 million contract with spacex marks the most significant government investment to date in spacex’s starship system, but blue origin and dynetics won larger lunar lander contracts from nasa.

“looking at the different contractors, each one of them is very different,” bridenstine said. “some of them are likely to be more interested in going fast, others are more likely interested in creating the breakthrough technologies that are going to drive down cost and increase access.”

the development of a commercial human-rated lunar lander is expected to drive nasa’s schedule for returning astronauts to the moon.

the program, named artemis, includes the space launch system heavy-lift rocket and orion crew capsule, and a mini-space station named the gateway to be assembled in a distant, elliptical orbit around the moon.

“we’ve selected the best of industry’s ideas to team with nasa,” said doug loverro, associate administrator of nasa’s human exploration and operations mission directorate. “this is really the last piece of the puzzle to go ahead and get us back to the moon. we’ve got all the other pieces in work already, and this is the last big piece. we are ready to move forward on this.

the three contractor teams will continue refining their human landing system (hls) concepts for the next 10 months before a “continuity review” next february. at that time, nasa could down-select to two hls contractors, and pick one for the artemis program’s first crewed lunar landing mission — known as artemis 3 — before the end of 2024.

a key to nasa’s vision for a “sustainable” crew presence on or near the moon is the gateway station. nasa officials originally hoped the gateway would be in position near the moon in time for the artemis 3 mission in 2024, allowing elements of the lunar lander to be assembled, or aggregated, at the gateway before the arrival of astronauts on an orion crew capsule. 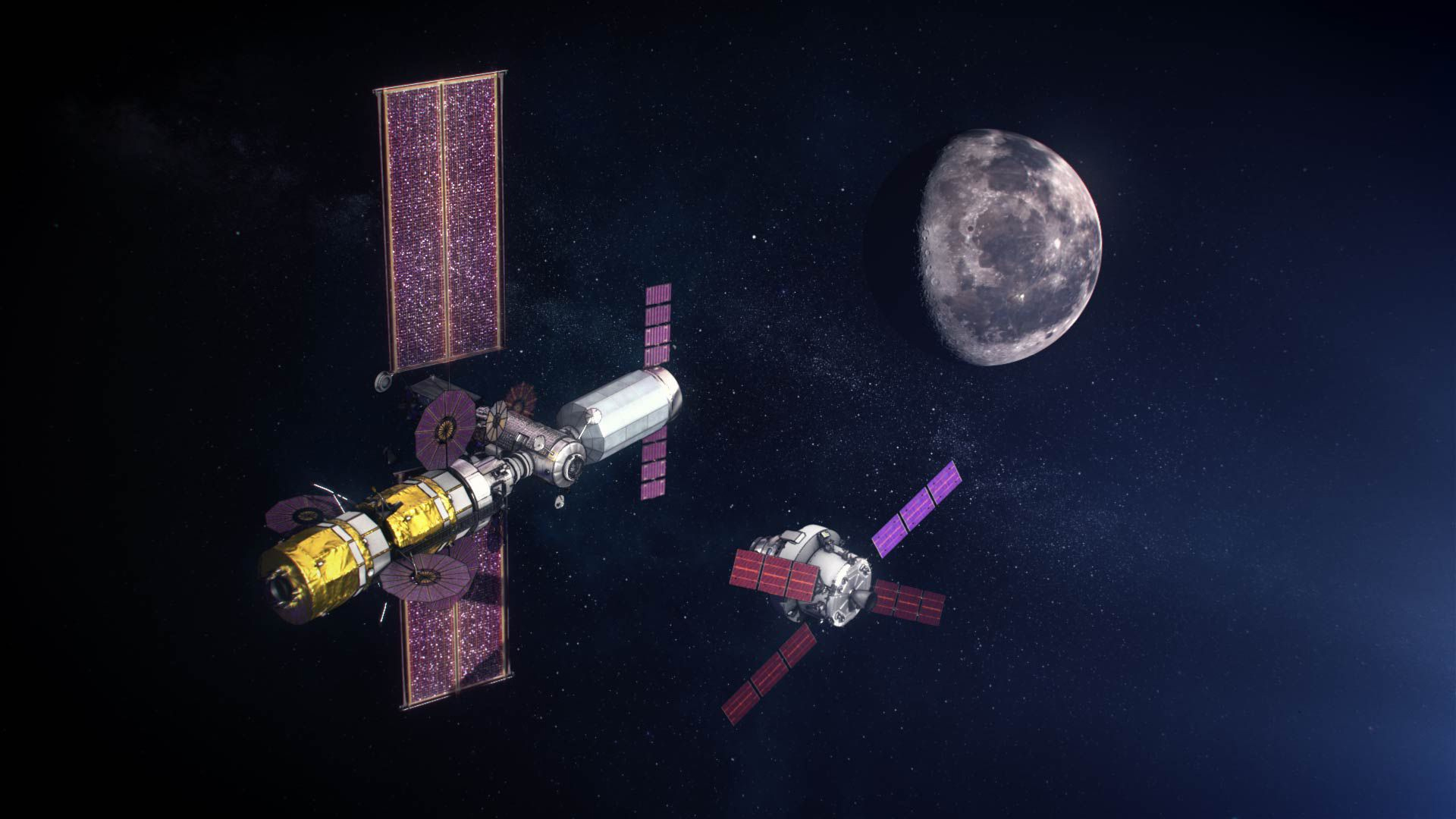 above > artist’s concept of the gateway mini-space station near the moon, showing an orion spacecraft just before docking. credit: nasa

“when we think about a sustainable presence at the moon, we absolutely need a gateway,” bridenstine said. “the gateway gives us the ability to reuse landers, over and over again, which drives down cost and it increases access. the gateway gives us access to different orbits around the moon, so we can get to the north pole, the south pole, the equatorial regions, and everything in between.

“the gateway is also transformable,” bridenstine said. “we can use it eventually for our ship to mars. the gateway gives us the opportunity to do science, and it gives us a lot of credibility with our international partners, who are very interested in helping us build out the gateway. i just want to emphasize … we are 100 percent committed to the gateway.”

“it is also true that we’re 100 percent committed to getting to the moon as fast as possible,” bridenstine said. “so anything that is not necessary, we intend to remove from that path for speed. so the first moon landing, we’re intending not to use the gateway. we’re intending to basically take an orion crew capsule and dock it to a human landing system that will be in orbit around the moon, and then go down to the surface of the moon.

dynetics has released little information about its proposed lunar lander, which would be developed in partnership with sierra nevada corp.

the dynetics human landing system would launch as a single structure providing ascent and descent capabilities, according to nasa. it would lift off from earth on ula’s vulcan rocket.

based in alabama, dynetics released an artist’s illustration of its human-rated lander in january that appears to show a large pressurized compartment, two large propellant tanks and power-generating solar panels extending vertically from spacecraft on the lunar surface. 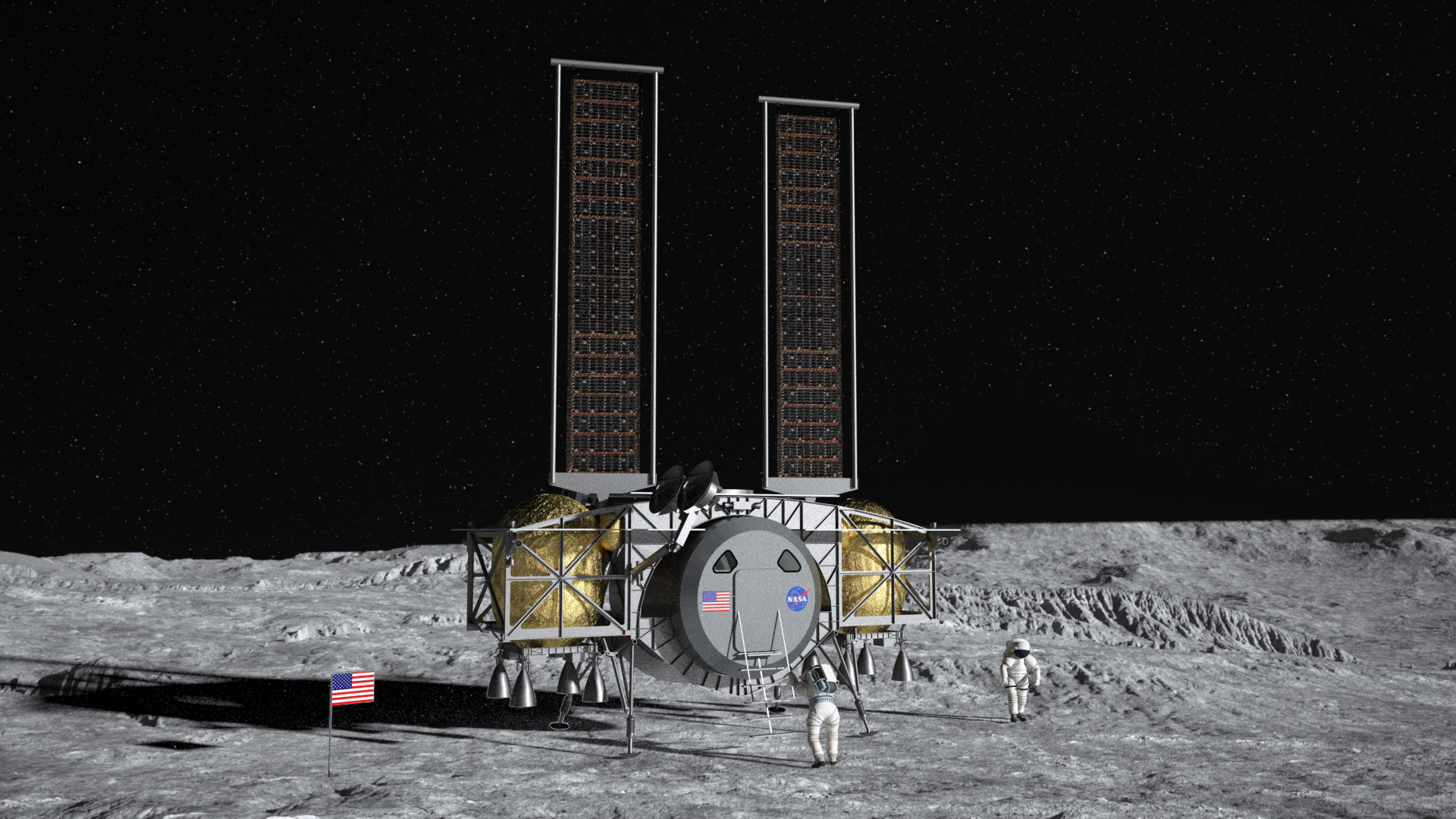 above > artist’s concept of the dynetics proposal for a human landing system. credit: dynetics

“spacex proposed the starship,” bridenstine said. “it’s obviously a very different solution set than any of the others. but it also could be absolutely game-changing. so we don’t want to discount it. we want to move forward. if they can have success, we want to enjoy that success with them.”

spacex’s reusable starship will launch on top of a giant booster named the super heavy. the starship vehicle, which serves as the upper stage on top of the super heavy booster, is designed to be refueled in space, enabling it to carry people and cargo to the moon, mars and other solar system destinations. 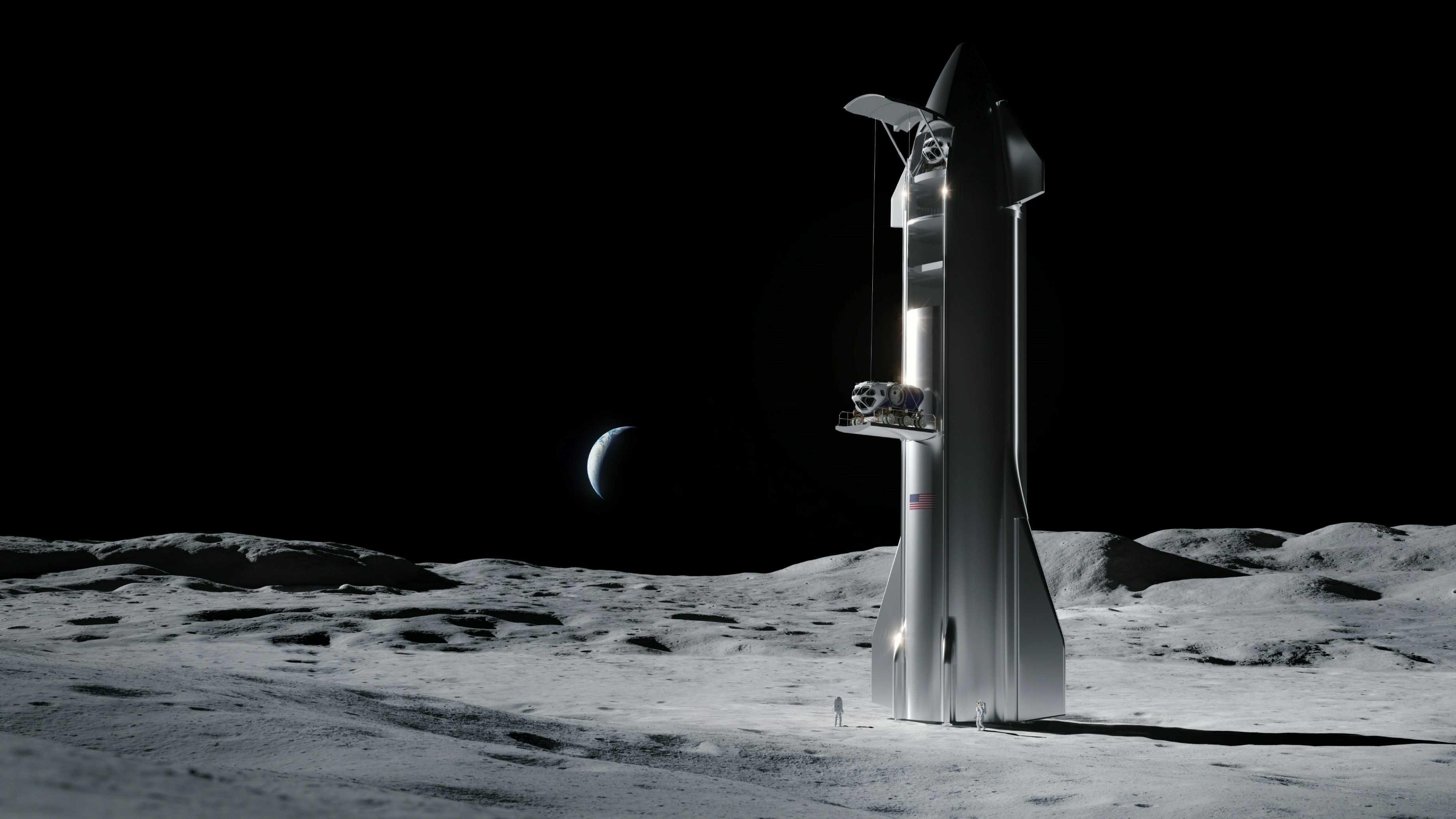 above > artist’s concept of spacex’s starship on the lunar surface. credit: spacex

by itself, the starship vehicle will stand around 160 feet (50 meters) tall with a diameter of roughly 30 feet (9 meters), dwarfing the other human-rated lunar lander concepts. it will land and take off vertically, powered by raptor engines each capable of generating nearly a half-million pounds of thrust at full power.

last year, spacex signed an agreement with nasa to use the starship to potentially carry robotic rovers, science experiments and other cargo to the moon’s surface. now it could carry people.

while the starship is designed as an all-purpose vehicle — capable of deploying satellites, science probes and crews — it would launch from earth without a crew for nasa’s artemis missions.