In the art world, DesignApplause attempts an objects-only mindset that could include a sculpture, or a photograph or painting of an airstream trailer for example. However, typically the art conversations becomes limited to works by designers showing in design galleries. For Expo 2013, for the first time, we put this question to the dealers we talked to: are there any architecture or design trained artists in your booth today? 2018 is our fourth iteration of this theme. 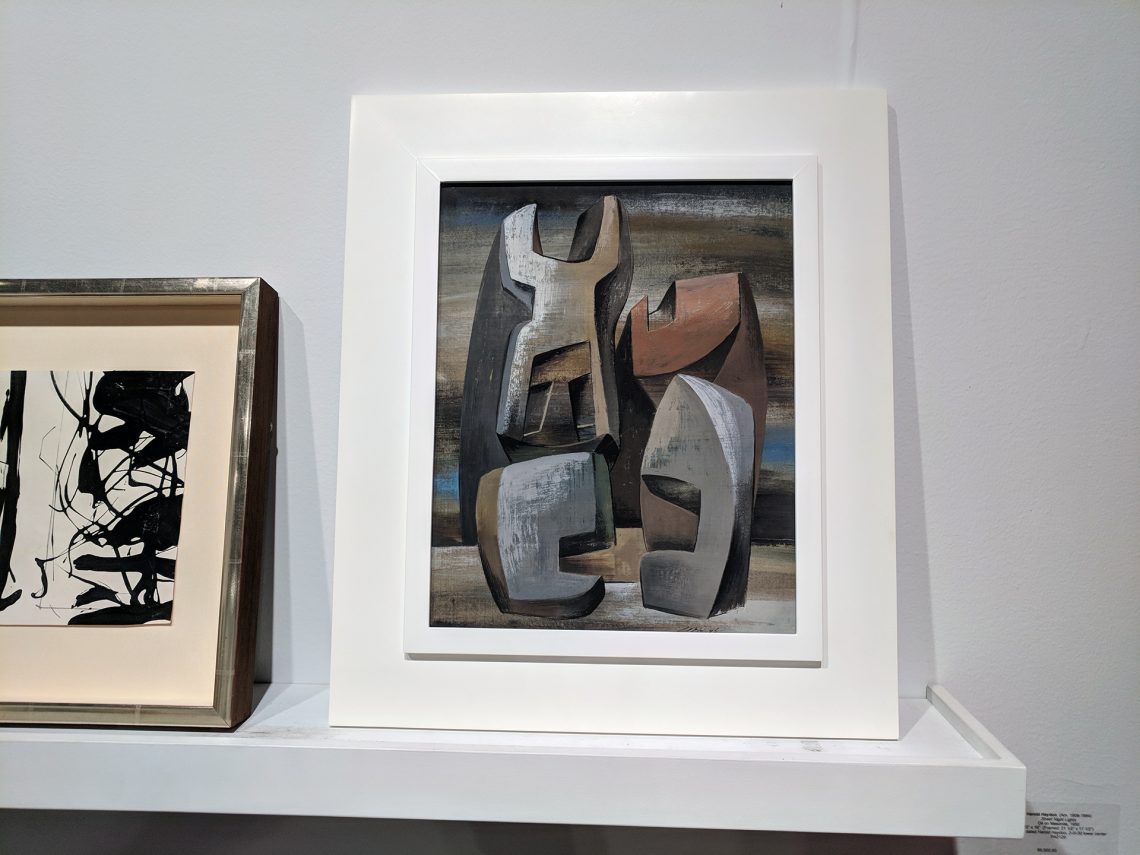 born in st. paul, minnesota, richard koppe studied at the st. paul school of art with artists cameron booth, leroy turner and nicolai cikovsky. in 1937, koppe moved to chicago and continued his studies at the institute of design (id) with the noted bauhaus masters laszlo moholy-nagy, gyorgy kepes and alexander archipenko. he became an instructor at the institute of design in 1946 and remained an associate professor at the id until 1963. robert koppe was moholy-nagy‘s first design student.

the new bauhaus was founded in chicago in 1937 by the renowned professor, photographer and artist, laszlo moholy-nagy. the new bauhaus stems from the german bauhaus, a pioneering school of art and design that operated from 1919-1933. the theories and teachings of the bauhaus, which emphasized a synthesis of numerous artistic disciplines, was most influential in championing modernist twentieth century design, fine art and architecture. after adolph hitler closed the german school in 1933, many of the bauhaus teachers, namely through the efforts of moholy-nagy, emmigrated to america to establish and work with the new bauhaus in chicago. industrialist walter paepke, chairman of the container corporation of america, was an early financial backer of the school, which was originally located in the old marshall field mansion on chicago’s prarie avenue. in 1944, the school was retitled the instiute of design (id) and today resides on the campus of the illinois institute of technology. (iit) the school became the first institution in the united states to offer a phd in design. much of moholy-nagy’s curriculum and ideas were outlined in his extensive 1947 book, “vision in motion”. many important prefessors and designers have taught or studied at the new bauhaus/id. these include such artists as serge chermayeff, ivan cherymayeff, alexander archipenko, buckminster fuller, gyorgy kepes, richard koppe, nathan lerner, harry callahan, robert bruce tague, john cage and werner drewes, among others. much of the influence on today’s american modern art, design and architecture may be attributed to the teachings of the chicago new bauhaus. 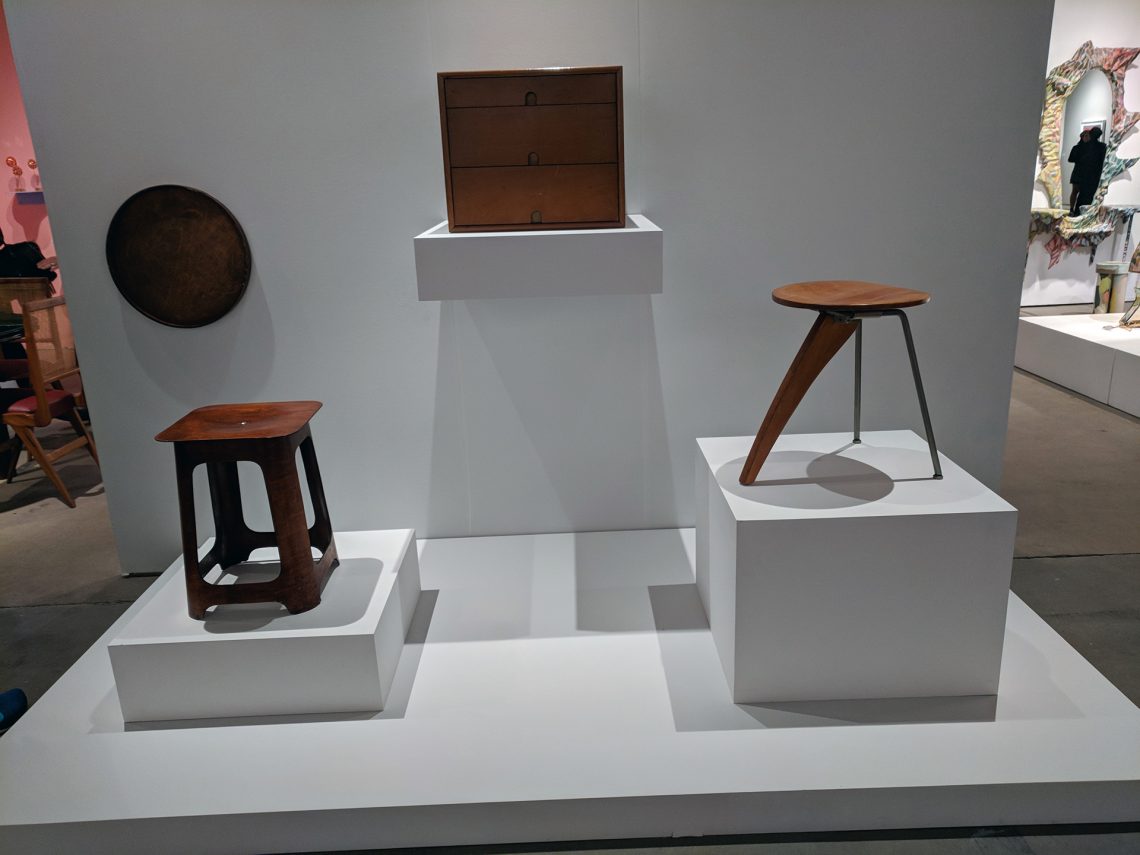 gregory scott was born in ann arbor, michigan in 1957 and received his bachelor degree from the institute of design at iit in chicago in 1979. scott has always blurred the lines between painting and photography, incorporating paintings he did of himself, or his body, back into his photographs. the resulting images were both humorous and odd, challenging the viewer’s perception of photographic truth. then, at the age of 49, scott decided to go to graduate school to strengthen his knowledge of art history and video making. having successfully merged his love of painting and photographs, his interest turned to video and its ability to move and manipulate still images. 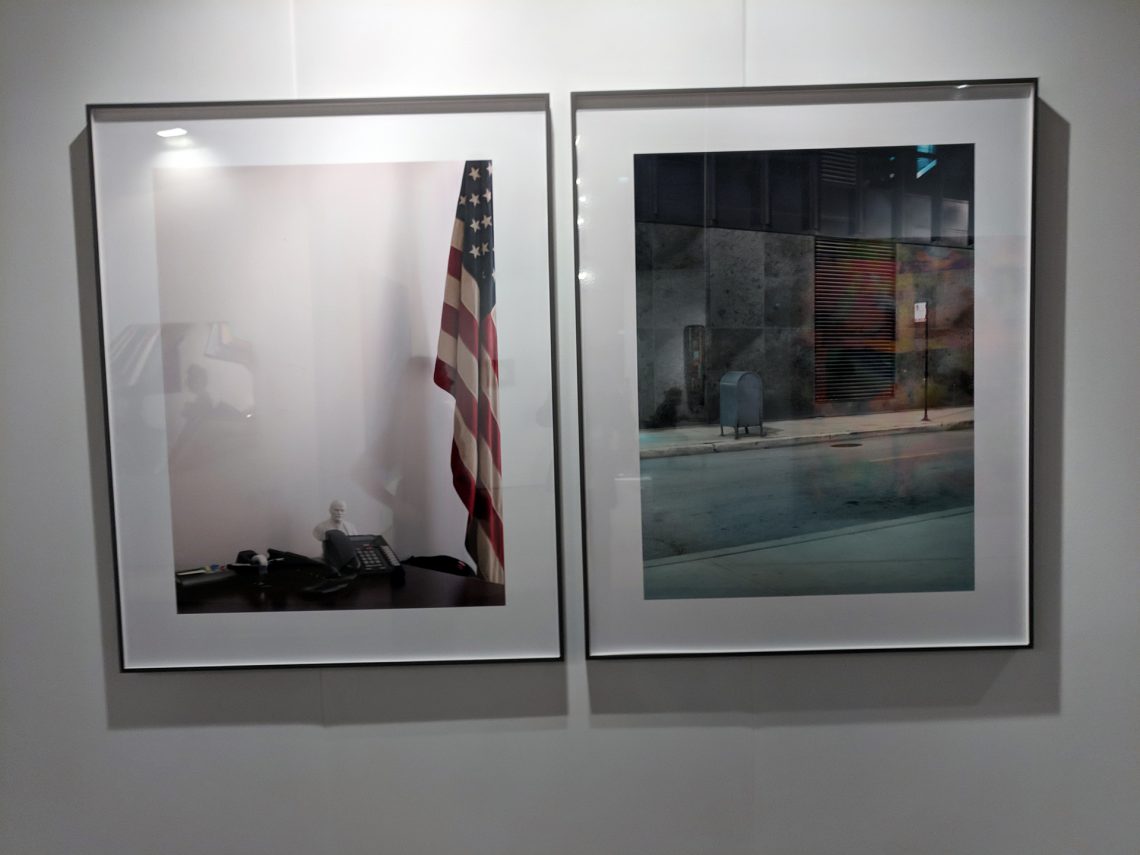 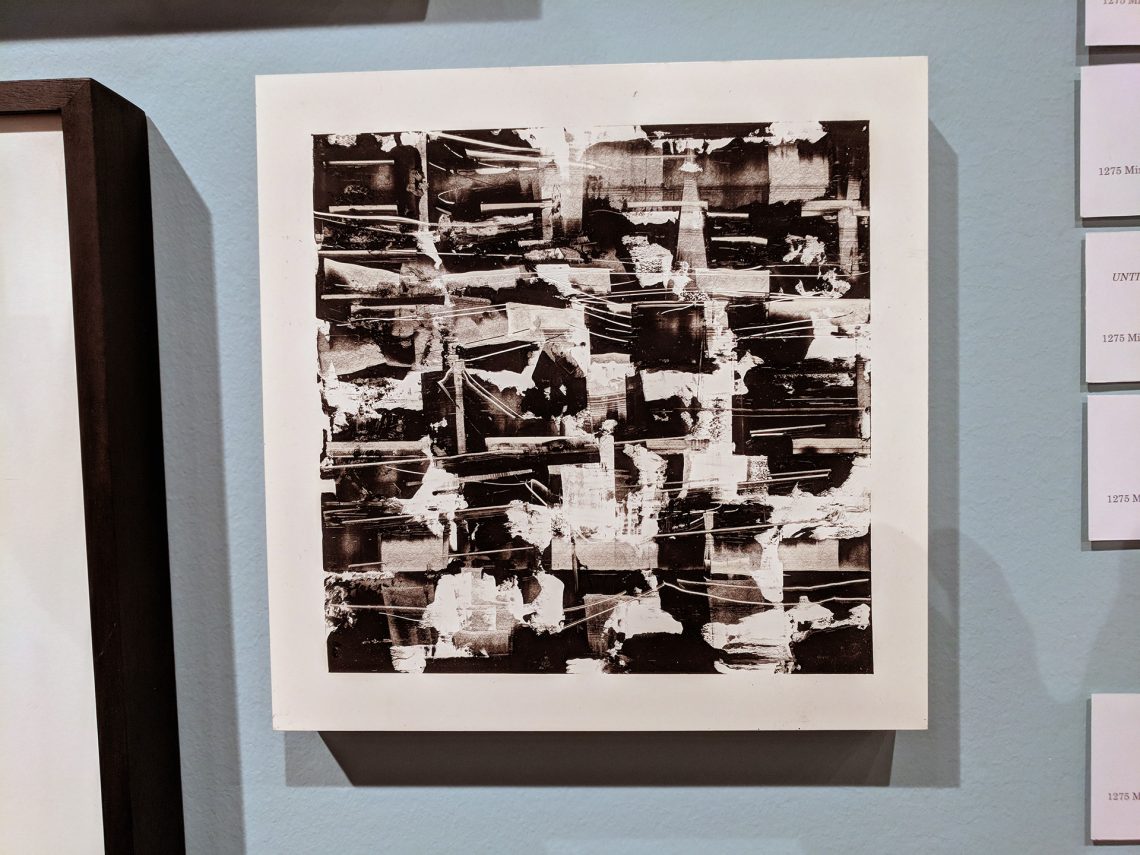 canan tolon, who trained as a designer and architect, explores visualizations of space via illusionistic imagery and constructions. tolon is known for her seemingly abstract paintings with geometric motifs and limited color palettes; over time, however, the rhythmic forms in her compositions begin to come into focus as series of overlain architectural structures and landscapes. these compositions are really tolon’s experiments in visual familiarity, examining the eye’s ability to piece together depictions of space from apparent abstraction. she is also known for large-scale installations with recurring use of dirt, grass, mirrors, and architectural constructions; these reference themes of colonization, urban growth, and land ownership. 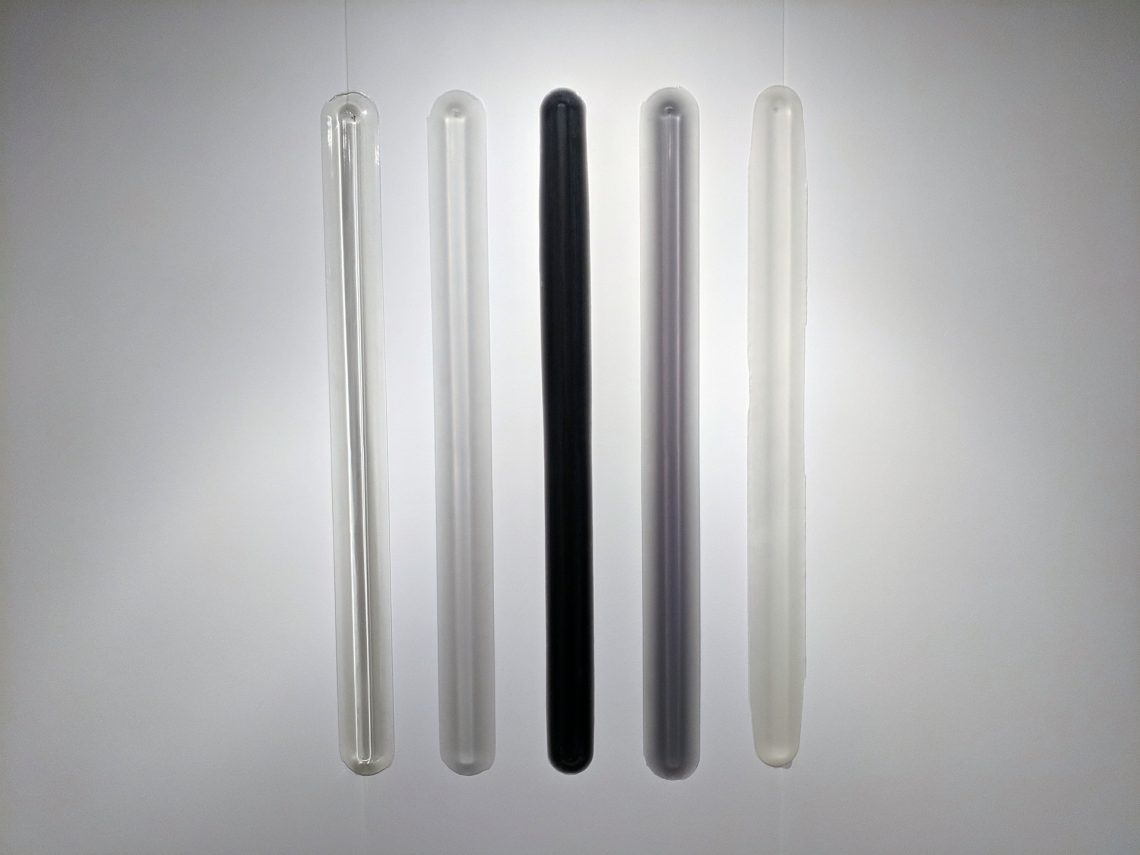 after initially working as an architect peter alexander rose to prominence in the 1960s with translucent resin sculptures. working with a southern california sensibility, los angeles-based artist peter alexander is most commonly associated with the light and space movement. his primary means of working today is in sculptural forms made of polyester resin reminiscent of his earliest work from 1965-1972. he has also produced paintings, including a series that depicts luminous aerial views of the city lights stretching across the los angeles basin. he also was commissioned to paint a large mural for the walt disney concert hall in los angeles. 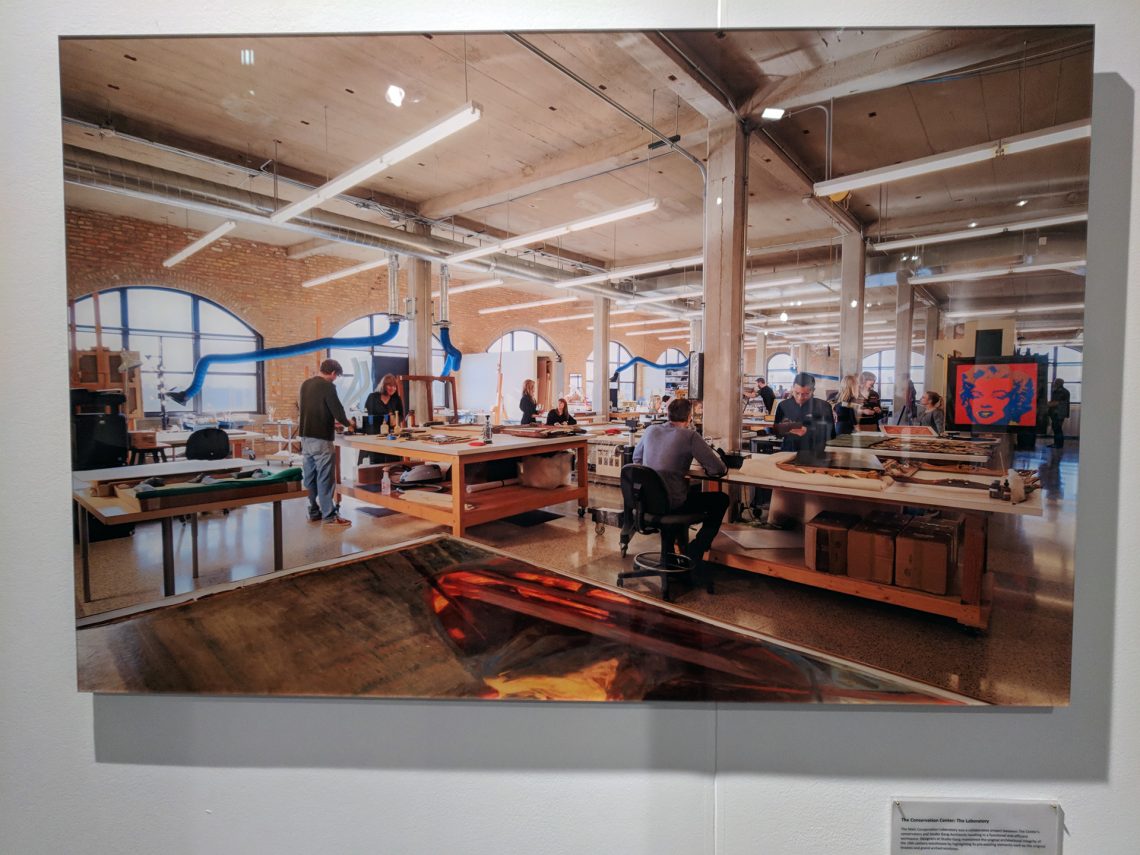 the conservation center: the laboratory by studiogang designers re-imagined in a 19th century warehouse highlighting pre-existing elements such as original finishes and grand arched windows. the conservation center is the largest and most comprehensive private art conservation laboratory in the country. with over 33 years of experience, the center is a leader in the field of art preservation, evolving new treatments and methods to adapt to the rapidly-changing art world. 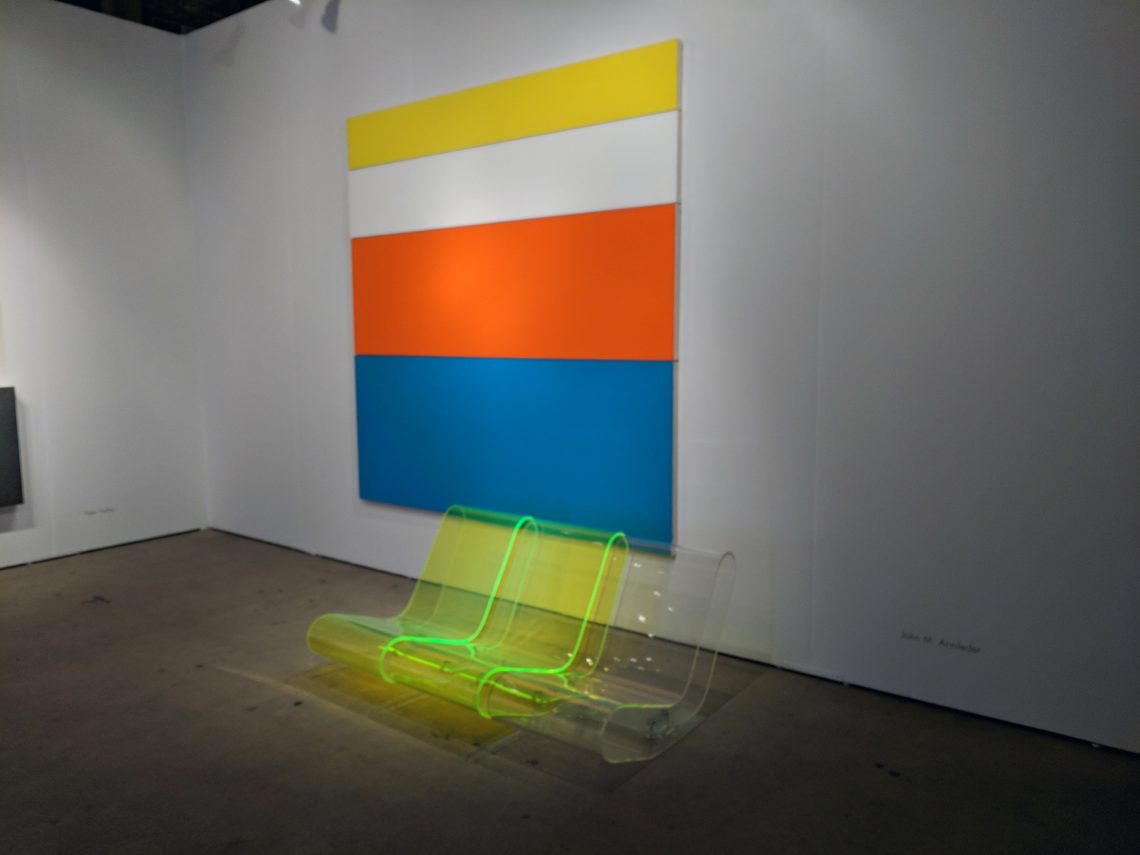 swiss artist, john m armleder is internationally recognized for his versatile work that lies in between art and life. his art shows a clear vision of xxth century art history, and he specifically addresses the dilemma of object-ness. from 1979 onwards, armleder began to exhibit his so-called “fs,” furniture sculpture. these pieces comprise the pairing of daily objects with paintings. the artist does this either by integration, in which case the object becomes the canvas, or by placement side by side, where the object becomes like any other element of the pictorial composition. [ full bio ]

back story to this post > apologies, i was told that armleder studied architecture which led him to conceive and juxtapose flat art and 3-dimensional art, i.e., creating the space, an environment, criteria many architects are drawn to. however, research suggests armleder works, which do evoke design and architectural comparisons, is self-taught. he himself believes that art is in the eyes of the beholder. nonetheless, he’s included in this post.

asked how he would define himself and his art armleder said, “obviously i believe that i’m a visual artist, i’ve been interested in painting and doing three dimensional objects since i was a kid. one always believes that the artist knows more, or understands the work he is doing better than the onlooker, or the people who take care of the work, and i think it’s not true. the artist has a very restrictive understanding of his own work because he’s so close to it, and he remembers the moments when he was making it, and the anecdotes, which are just episodes. it’s not at all a universal understanding. i think the art should work on its own, the people who look at the works invent the works again, and the artist is just a side effect. so it’s very difficult for me to say this or that, and i don’t think it’s really my style to try to control the understanding or the focus of the work and say that it’s about this rather than about that. so what binds it all together? it’s obviously time, space—areas. and all that would be wiped out by new time, new spaces.

///
note: there were seven galleries who did not hang work at expo chicago, works of their artists who have backgrounds in architecture and design. we plan on adding this work to this post as it comes in.
///

expo chicago (september 27-30, 2018), the international exposition of contemporary & modern art, has established the city of chicago as a preeminent art fair destination. opening the fall art season every september, expo chicago takes place at historic navy pier whose vast vaulted architecture hosts leading international art galleries alongside one of the highest quality platforms for global contemporary art and culture. dedicated to rigorous and challenging programming, expo chicago initiates strategic international partnerships, built alongside strong institutional relationships with major local museums and organizations to open parallel exhibitions and events. the 2018 edition of expo chicago will align with art design chicago, an initiative of the terra foundation for american art, to present various programs and events throughout expo art week (september 24–30, 2018) including panel discussions, performances, and activations across the city. 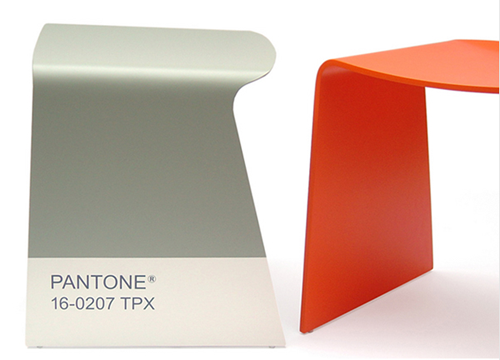 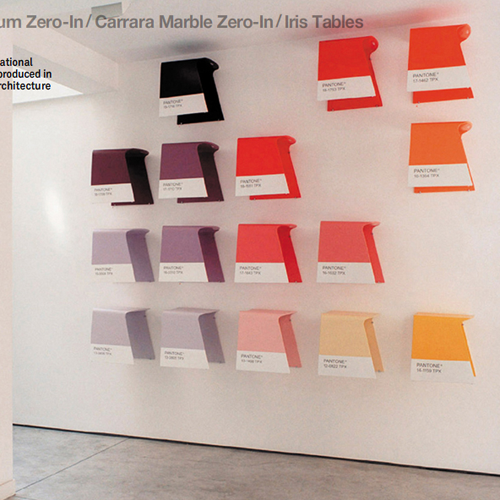 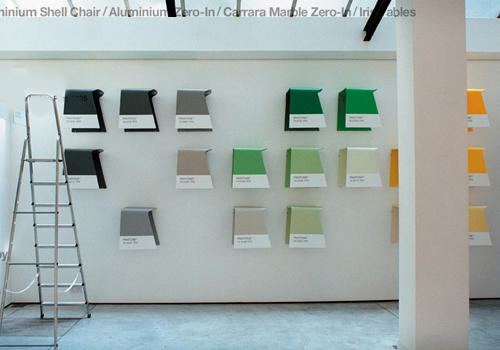