Golden Waters, a temporary light installation by artist Grimanesa Amorós, which extends from the famous Soleri Bridge, is on view now until September 30, 2015. Scottsdale Public Art, a leader of defining art in the public realm, is the sponsor of the installation. 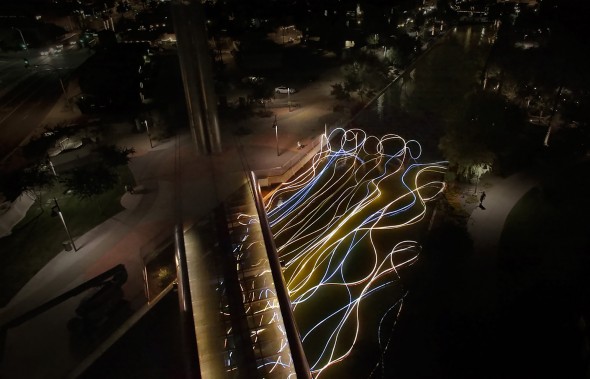 Inspired by and reflecting the natural elegance of the Arizona canal, a nearly fifty mile long body of water that runs through Scottsdale, Golden Waters is mounted on a secure structure attached to the bridge, designed by artist, architect and philosopher Paolo Soleri. The hovering light sculpture extends parallel to the canal channel eighty feet west of the bridge. Golden Waters’ LED tubing system appears to rise from the canal waters below, celebrating the union of light and water. 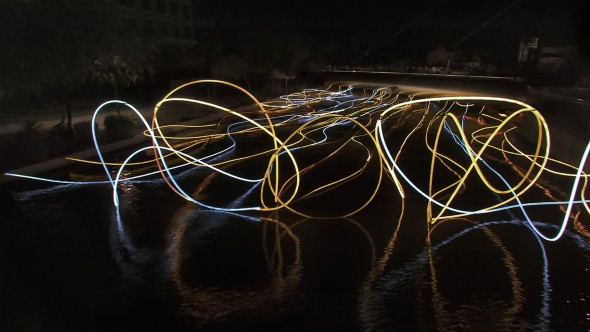 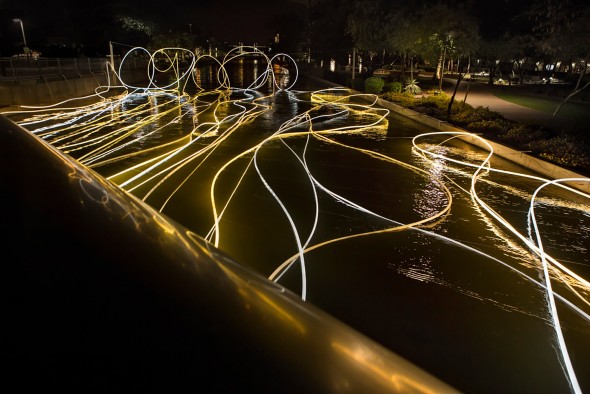 The vertical and horizontal lines of the installation are a metaphor for the dynamic balance between urban and natural forces that can be experienced simultaneously. Golden Waters hopes to engage the viewer by emphasizing a unique perspective on nature and landscape.

[ grimanesa amorós ]
Grimanesa Amorós was born in Lima, Peru and lives and works in New York City. She is a multidisciplinary artist with diverse interests in the fields of social history, scientific research and critical theory, which have greatly influenced her work.
Amorós researches the locations, histories and communities of the installation sites. Her process remains organic and instinctive. This intuitive relationship to technology is a distinctive feature of Amorós’ practice. Her works incorporates elements from sculpture, video, lighting, and technology to create site-specific installations to engage architecture and create community.Grimanesa Amorós has often drawn upon important Peruvian cultural legacies for inspiration for her large-scale light- based installations, which she has presented around the globe from Mexico, Tel Aviv and Beijing to New York’s Times Square. She continues to be inspired from Peru’s history for her art but she does not hold an essentialist or nostalgic view of her subject. She often gives talks at museums, foundations and universities where her lectures not only attract future artists but students and faculty engaged with science and technology. It feels somewhere in the art of Grimanesa Amorós, the past is meeting the future. Amorós has exhibited in the United States, Europe, Asia, Middle East and Latin America.
For more information about Grimanesa Amorós, visit http://www.grimanesaamoros.com/bio/

[ scottsdale public art ]
The mission of Scottsdale Public Art is to serve as a leader in defining art in the public realm through creative place-making, signature cultural events, exhibitions, and installations—contributing to the community’s creative, cultural, and economic vitality. 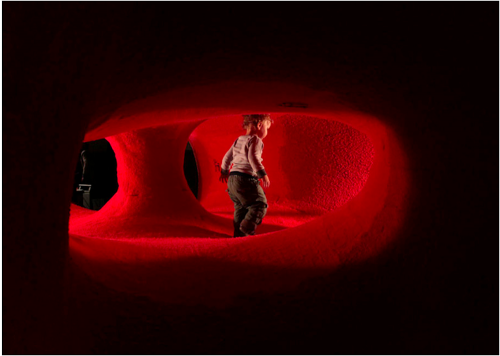 You can’t tell from the image above, but these people are actually suspended in mid air inside a church in Pula, Croatia. It’s part of Tuft, an installation by the Croatian-Austrian design collection Numen/For Use, which will hang from the ceiling until the end of the month. From the outside the piece looks like an outdoor speaker system, the kind used in an air raid or, on the other hand, the kind used in Muslim countries for daily calls to prayer. Inside, however, the cozy, dimly lit carpeted play space looks more like a 70s-era lounge. But none of these ideas seem to connect, so I hunted down the artist’s statement.

“Tuft is an evolution of the tape concept into a more permanent, self-standing, transferable structure. Adhesive tape is used to generate the primary form of the object. The organic surface of the carpet is later achieved through precise division of the shape in two-dimensional segments, enabling traditional tufting technology. The development and production were executed in a Croatian factory Regeneracija, a former regional industrial giant.

“Rough, industrial surface of the back side of the carpet is deliberately exposed to serve as a counterpoint to the invitingly soft, carnal interior. The result is a surreal simultaneous feeling of anxiety and thrill whilst entering into the installation.”

I guess I couldn’t have been more off base, though I a dark red 70s lounge does have a certain carnal look. All interpretation aside, I’m most impressed by the fact that this installation was born from an investigation into adhesive tape. 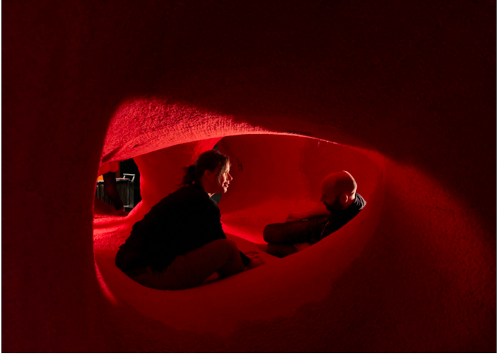 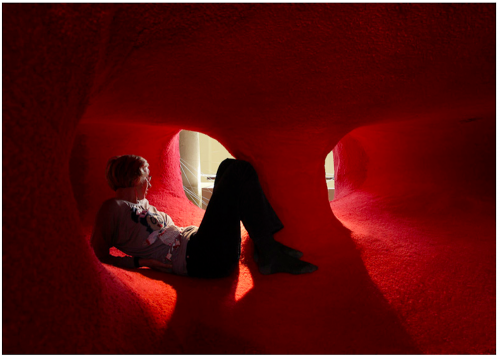 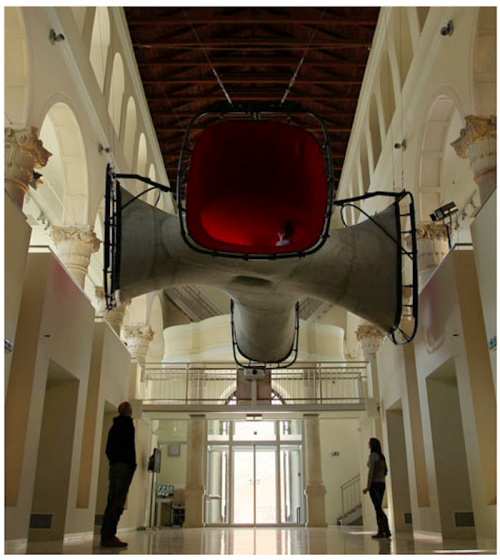 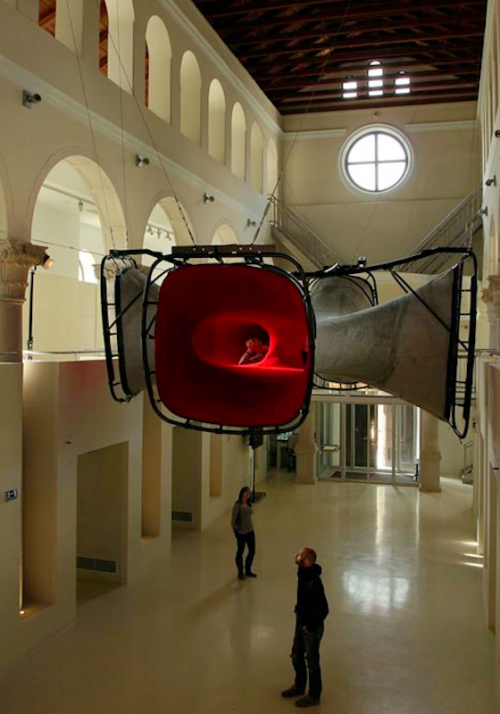