I only have eyes for you hirshhorn museum. 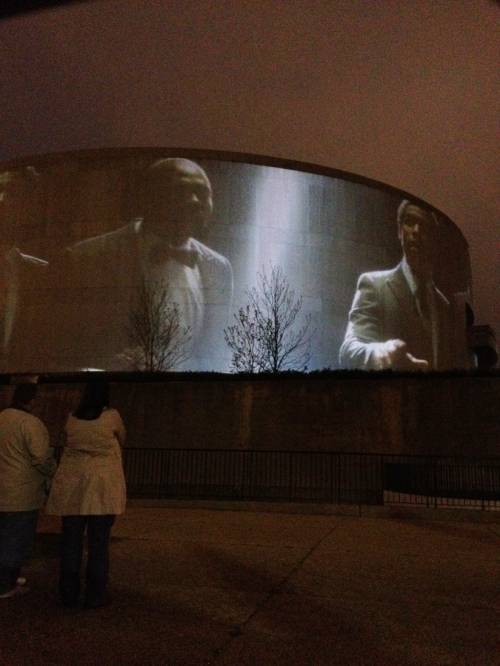 Sunset comes later than you think in March in Washington. The Mall was still full of people the other night when the images of Doug Aitken’s “Song 1” began to appear on the walls of the Hirshhorn Museum. The concrete drum of the building, designed by Gordon Bunshaft of Skidmore Owings Merrill in the late 1960s, disappeared beneath what is essentially an extended music video. Ordinary people in mundane locations—a diner, a factory, a car —sing the classic song, “I Only Have Eyes For You,” along with a few pros in clubs and bars. (The only person I recognized was actress Tilda Swinton.) It’s a kind of global karaoke.

The project is part of director Richard Koshalek’s effort to revitalize the Cold War bunker of the museum, set on the mall, with imaginative shows. He is redesigning it by addition and experiment. The tune was introduced in 1933 in a Busby Berkeley musical film and later made a hit by Peggy Lee and the Flamingoes. The building ends up disembodied and forgotten, but you can’t get the song out of your head. [ hirshhorn ]

Hirshhorn museum moves into next design phase for inflatable pavillion. 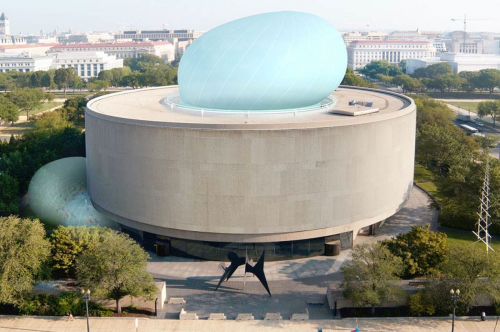 Blow-up museum the new pop-up museum. The Smithsonian’s Hirshhorn Museum and Sculpture Garden received supportive comments from the National Capital Planning Commission for a proposed seasonal inflatable pavilion to the museum’s plaza. Architectural firm Diller Scofidio + Renfro’s design for the structure was reviewed at the concept stage. The NCPC voted to approve executive director Marcel C. Acosta’s recommendation of the project. To date, the Hirshhorn Museum has received encouragement to proceed with the development of this project by both the U.S. Commission of Fine Arts and the NCPC. 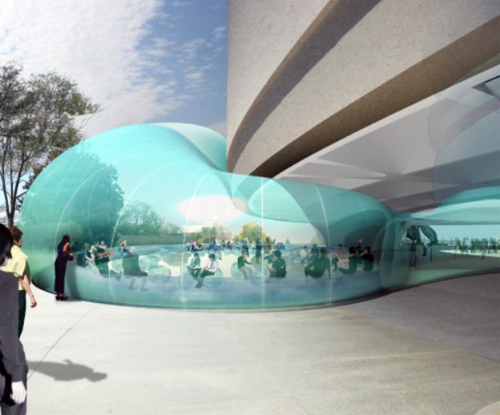 In a written recommendation, Acosta states, “…the semi-annual transformation of the museum’s central courtyard will create an exciting and unanticipated attraction along the National Mall…” The Commission recommends that the Hirshhorn continue to develop designs for two versions of the inflatable pavilion prior to making a determination on a final design. The temporary inflatable pavilion will be a site for new educational initiatives, as well as a place for collaborations between the Hirshhorn and other national, regional, and local institutions. With an expanded auditorium, the temporary pavilion will serve as the hub for a new series of conferences exploring important cross-disciplinary issues in media, technology and contemporary culture. Standing nearly 122 feet tall, the inflatable structure will sit in the Hirshhorn’s courtyard, ballooning through the top of the building. It will be appropriately visible from all sides of the museum and at points along the Mall. Extending from the lobby and featuring the auditorium, meeting places and a café, the pavilion will transform the Plaza into a vibrant public space. New York City-based architecture firm Diller Scofidio + Renfro was contracted in September 2009 to start working on the concept of the temporary inflatable pavilion. Initial construction of the pavilion has been estimated at $5 million, with an additional endowment of $2.5- $5 million for continuing installation, storage, and programmatic research costs. DSR’s recent projects include the redesign of Alice Tully Hall at New York’s Lincoln Center, Boston’s Institute of Contemporary Art (ICA), and New York’s High Line.