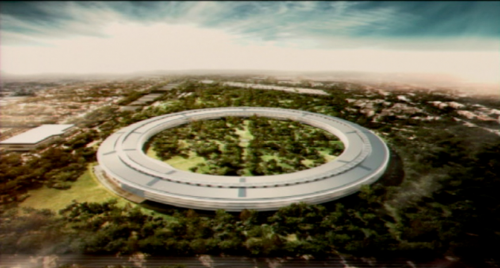 It embodies both the best and worst of Apple culture and, if you will, the Apple cult. 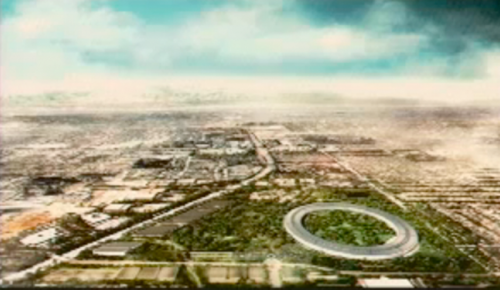 Its environmental credentials seem unimpeachable. The design replaces the scattered buildings on the site formerly occupied by Hewlett Packard and replaces them with below ground parking and a central garden court with plantings. Pavement and building signature is reduced by thirty per cent. Some 6,000 trees are planned for the site. There are already several hundred apricot trees, recalling the earlier use of much of the land in the area for plum, apricot and other fruit orchards.

Spaceship or donut, the shape also recalls a castle. It is self contained, for one thing, able to stand a siege. Jobs said the building will generate its own clean energy with nature gas and use the wider power grid only as backup.

Like so many Apple products, its shape does not allow for expansion or accessorizing. Jobs’ ring is as grandiose as Wagner’s Ring, as fantastic as Tolkien’s. It recalls the torus shaped space station of Wernher Von Braun and Chesley Bonestell’s visions for Disney circa 1955, as reproduced in 2001 A Space Odyssey, slowly rotating to the accompaniment of classical music. It is also a symbol of the bonding offered by the Apple culture: you are either inside the ring or outside, you enjoy bonding with the Apple or you regard it as a bit of a cult.

The Apple ring also resembles the “spy donut” of the Government Communications Headquarters in Cheltenham in Gloucestershire, housing the British organization roughly equivalent to the U.S. National Security Agency. That structure, designed by Gensler, has internal courtyards and one way glass.

The record of circular buildings is not good. They tend to be disorienting, difficult places to find your way around in. Consider the Hirshhorn Museum on the National Mall in Washington or all of those John Portman hotels and towers or circular airport terminals where you wander searching for gate 17.

Symbolically, the ring reflects everything that is good and bad about Apple: the boldness and elegance of design on one hand, the limits to functionality and interaction on the other.

Jobs feels he knows already that “there won’t be a straight piece of glass in it” without learning whether that esthetic effect makes practical sense.

Conway’s Law holds that all organizations, especially those that create programs, turn out products that are models of their organizational structure. Apple’s happy feudalist ring contrasts with Microsoft’s giant state university like “campus,” sprawling but semi-permeable. ”

The two old light bulb jokes reflect the extremes of the two cultures: How many Microsofters does it take to change a light bulb? “None. They just declare darkness an industry standard.” For the Apple joke the answer is: ”One, to hold the bulb: the world turns around Apple.” The ring building is a structure that arrays the world around Apple.

The building echoes the ideas behind the product designs. The elegant simplicity of the best of Apple design long predates today’s regime. It was there in the frogdesign years and years when Bob Brunner was running Apple design. The very first Macintosh, remember, was a refreshingly simple single box at a time where personal computers were made of pieces wired together—keyboard, monitor, CPU, disc drive, printer and so on. But often too functionality is sacrificed to style: the lovely thin Air computers are limited in power and memory, the I Pad lacks a USB port, the iphone won’t deal with Flash and so on. [ there’s more ]