This week there’s serendipity in the air in Chicago and Paris. That’s because this week we received a shout from [ Maison & Objet ] [ Chicago Architecture biennial ] and we were sent Lessons from the Eiffel Tower (below). It’s because we’re reminded the M&O event occurs in Paris in January 2016. The Biennial reminds us weekly through 3 January 2016. Architect Daniel Burnham reminds us of big plans as does engineer Alexandre Gustave Eiffel.

Make no little plans; they have no magic to stir men’s blood and probably themselves will not be realized. Make big plans; aim high in hope and work, remembering that a noble, logical diagram once recorded will never die, but long after we are gone be a living thing, asserting itself with ever-growing insistency. Remember that our sons and our grandsons are going to do things that would stagger us. Let your watchword be order and your beacon beauty.
~ daniel burnham, architect

Lessons from the Eiffel Tower
> It was designed at home, on the kitchen table by someone who didn’t get their name on it
> Never been done before, not guaranteed to get built or to work
> It was criticized by hundreds of leading intellectuals and cultural experts
> It wasn’t supposed to last very long
> It’s designed to be an icon, it’s not an accident
> People flock to it because it’s famous
> You can sketch a recognizable version of it on a napkin

above > built in 1887 and opened in ’89, the eiffel tower is an iron lattice tower. it was named after the engineer alexandre gustave eiffel, whose company designed and built the tower | click on image to activate lightbox – six images [ eiffel tower history ] [ 10 things you may not know about the eiffel tower ][ seth godin ] 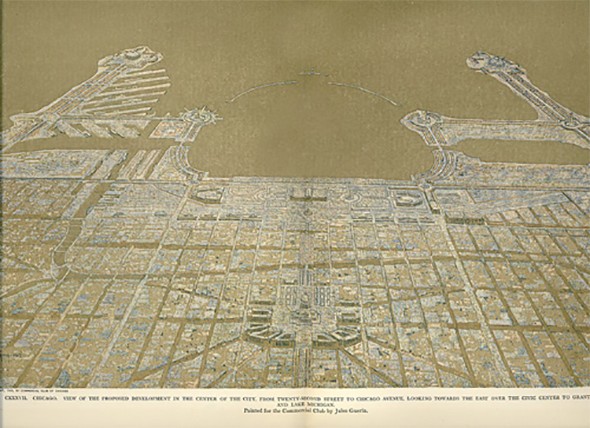 above> image from the 1909 publication ”Plan of Chicago” by Daniel Burnham. Burnham was famous for the dictum “Make no little plans,” and Jules Guerin’s alluring watercolor renderings in the published “Plan of Chicago” gave this vision an ethereal cast. [ 100 years. Daniel Burnham’s Chicago Plan ]