the peconic 43: a shelter island motor yacht by scott henderson

Peconic 43 is inspired by the classic Down East yacht, a maritime archetype indigenous to the north eastern United States fishing and yachting industry. The hand‐crafted yachts by CH Marine, which include the iconic designs Vendetta and Alexa for American singer /songwriter Billy Joel, evoke the style of the Downeaster and pay homage to a golden age of yachting with their exquisite detailing and refined hand‐selected materials. The Peconic Bay, which separates the North and South forks of New York State’s Long Island, is steeped in maritime and seafaring traditions. Long Island Baymen have harvested the rich fishing waters for over a century using Down East vessels. Yachting in the region continues to link the famed harbors of Sag, Montauk the Hamptons and New York City as well as the Connecticut coastline, Block Island and other maritime destinations‐ teaming the region’s waterways with pleasure, fishing and commuter vessels. 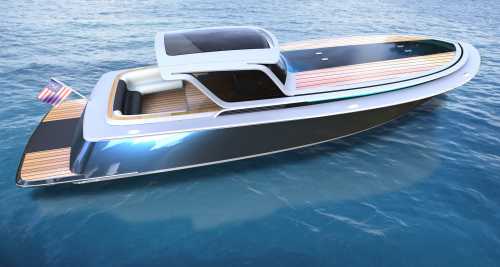 The Down East Yacht archetype is a classic style of vessel—and a perfect launching platform to create a contemporary statement while maintaining the inherent ties to traditions of the region it stems from.

Peconic 43’s hull flattens out the raised forward bow more typical of a classic Down East motor yacht, adding the feel of speed and power to the hull’s shape – appropriate given the twin Yanmar Marine 8LV
370 MHP engines in its power plant which give the yacht a robust top speed of 48mph.

The forward deck features two inlayed decking stripes which seem to peel away from the decking’s teak surface, transitioning into the structural support of the hard‐top canopy over the cockpit area. This simple innovation lends a radical new look to the yacht. This “twist” in view‐point makes Peconic 43’s outward persona feel fresh, awe‐inspiring and instantly memorable.

Replacing traditional side window portholes for a wrap‐around glass side window that begins just forward of two mirrored engine vents below the wheelhouse canopy and continuing forward by wrapping completely around the nose of the bow. This provides the owner and guests with a 180-degree view of the exterior surroundings while inside of the spacious interior salon. Traditional Down East Motor yachts utilize two to three small portholes on the port and starboard sides of the raised forward deck. Peconic 43’s innovative full wrap of glass makes the interior salon feel bright and open, eliminating the feeling of a closed‐in space. This innovative detail seems to float the forward decking, visually lightening the otherwise heavy and opaque look of the exterior cabin. This floating forward deck and recessed wrap‐around glass side window also communicate speed, as the detail helps to naturally draw air into the engine’s side vents much like air‐intakes on a jet aircraft. 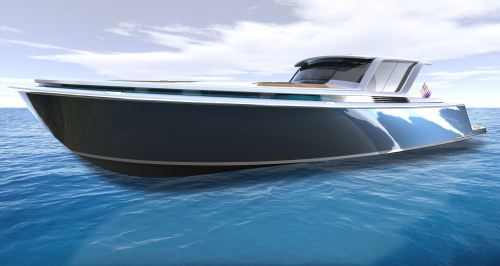 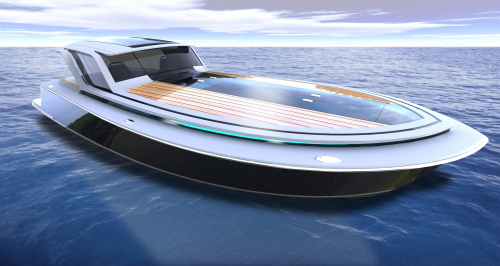 The yacht has a skylight of glass that starts at the tip of the bow, continues seamlessly into the windshield, and then up and over the wheelhouse canopy. This long skylight is broken by two hatches that provide easy access to the forward sundeck from the interior salon. In addition to bringing ample natural light to the spacious interior salon with two meters of head space, the visual racing stripe continues through the aft seating area and on through the swim deck in the rear, furthering Peconic 43’s fast, agile and powerful stance.

The innovations and fresh point of view make her a compelling and head‐ turning choice for an ample sized Superyacht tender, providing the Superyacht owner with a vessel steeped in the traditions of North Eastern American yachting culture.

PECONIC 43 is built to order by contacting CH Marine at 631 749 0856 or by emailing either Scott Henderson at scott@scotthendersoninc.com or Peter Needham at peter@chmarineyachts.com

[ scott henderson ] is an American industrial designer working in Brooklyn. Known for his innovative consumer products in the areas of houseware’s, electronics, furniture and his line of Museum Store gift objects called MINT, the Peconic 43’ follows his earlier yachts PRIONA, QUILLON, MANTA, SPIRA and the Chris Craft SCORPION, from 2012>13.