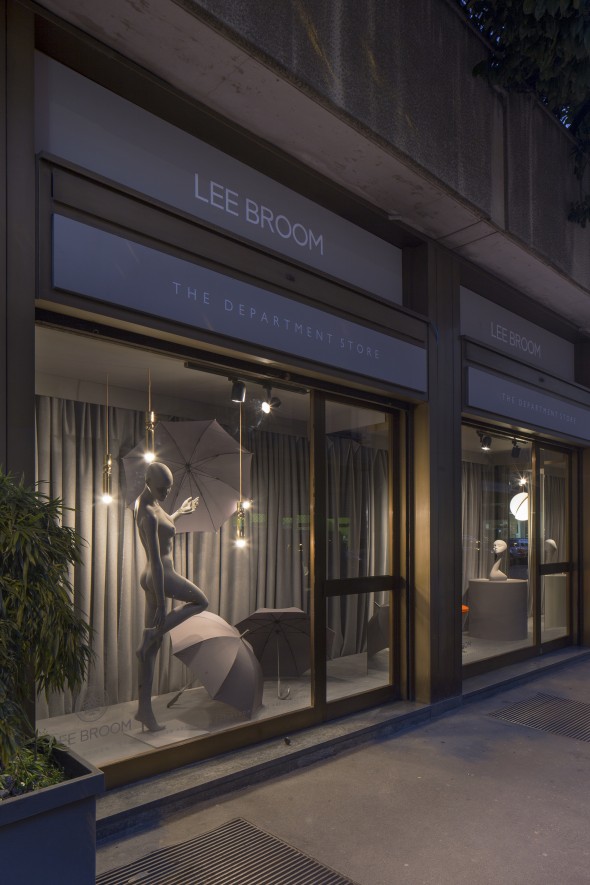 Lee Broom took over a row of shops on Via Alfredo Cappellini and created a faux department store to launch his largest collection to date in what OnOffice Magazine is calling, “Milan’s biggest head turner.” 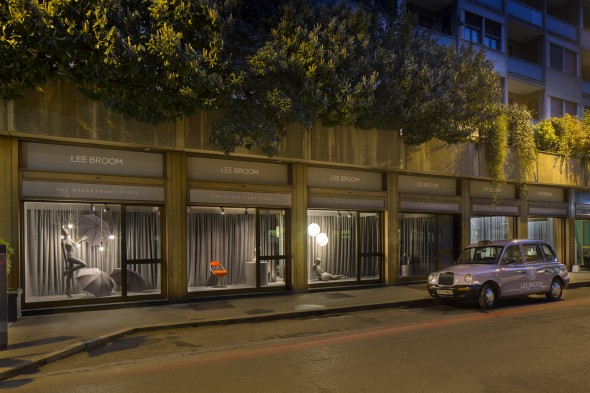 “I typically work on over 50 products at any given time. I started to see that a lot of pieces were all coming together into something that could become a collection and I didn’t want to wait, so I decided to release everything at the same time,” said Broom. 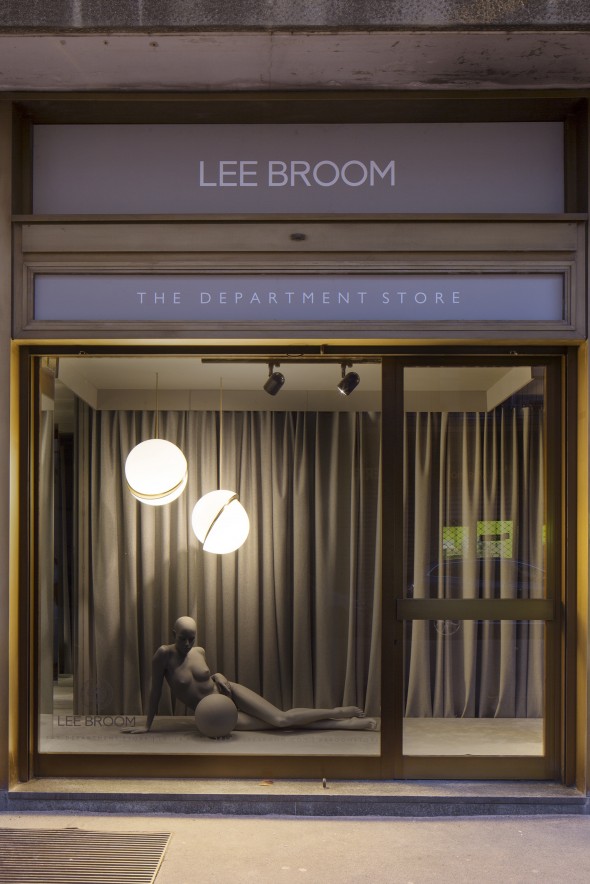 The result is a collection of over 20 new products spanning lighting, furniture and glassware, showcased in a row of six shops that the British designer converted into a pastiche of a department store, complete with dismembered mannequin arms, theatrical reveals and Vivienne-Westwood-clad shop assistants. 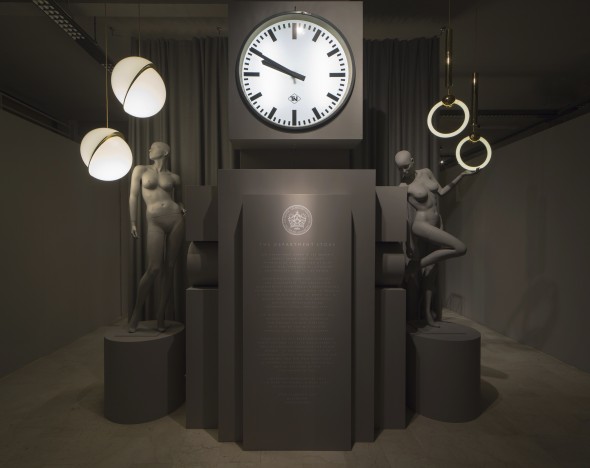 “The other reason for launching such a large collection is that I have been inspired by lots of different things over the past 18 months, so I wanted to show as much of that as I could,” said Broom. “I’ve been very much influenced by a simplicity of shape, working in different materials and taking very simple shapes or classic things that you’ve seen before and just giving them a twist.” 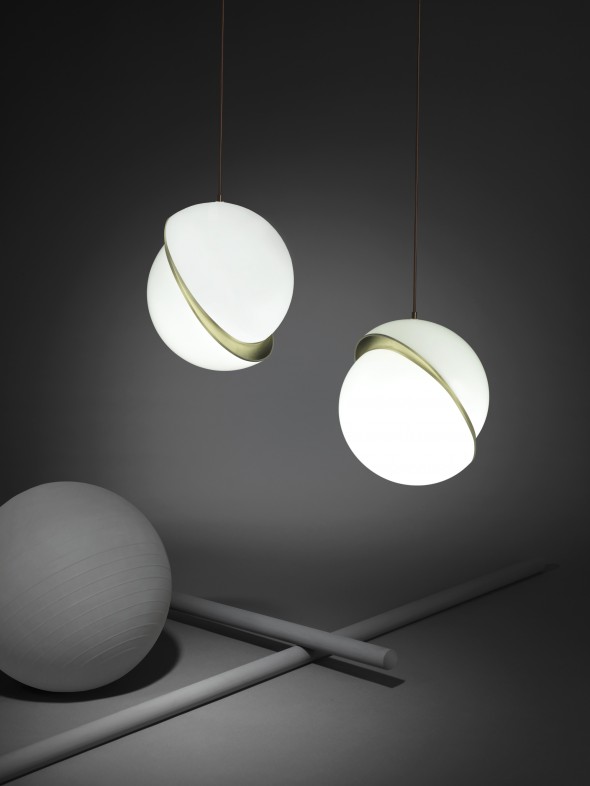 “For instance the Crescent Light is a classic globe light from the Art Deco period that I’ve sliced in half on an angle to reveal this brass surface inside,” he said. 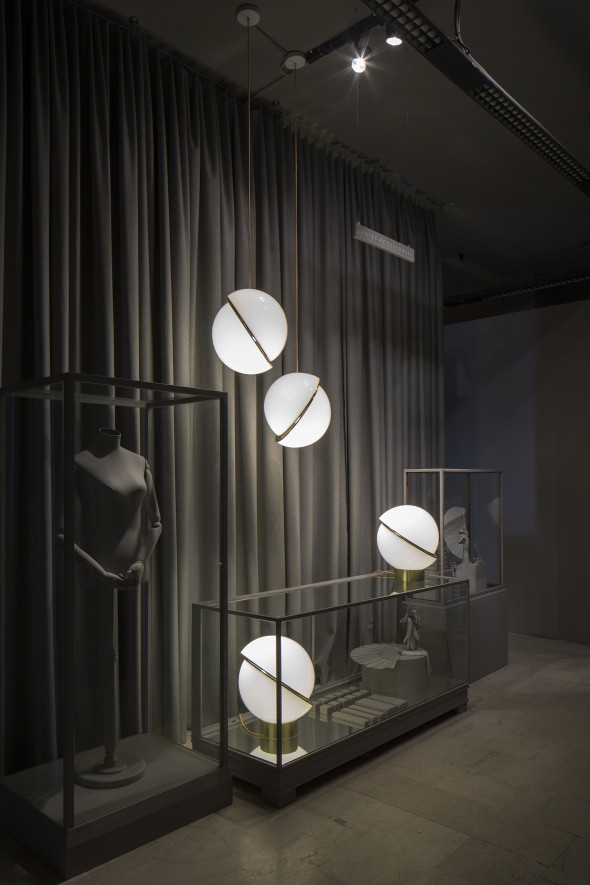 The lights were shown in “Ladies Accessories” – one of 12 departments across two floors in the imitation Department Store. Other departments the designer created included the Gents Fitting Room, the Book Store and the Haberdashery. 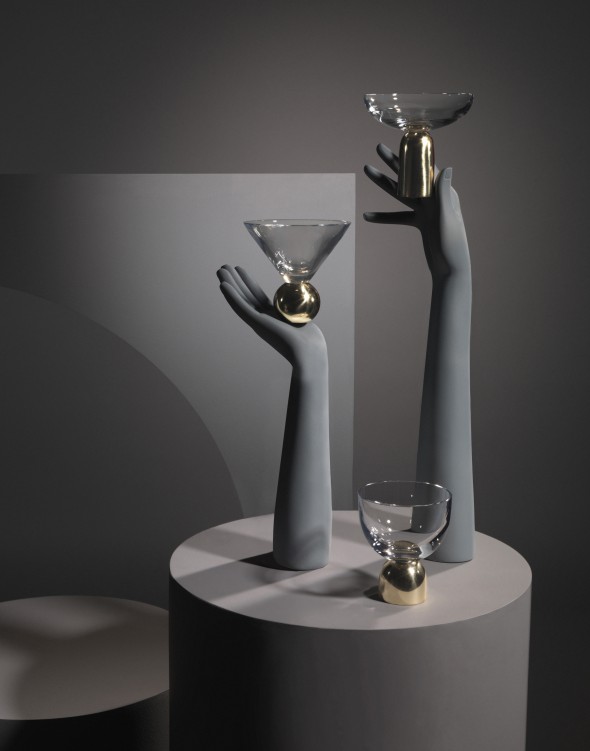 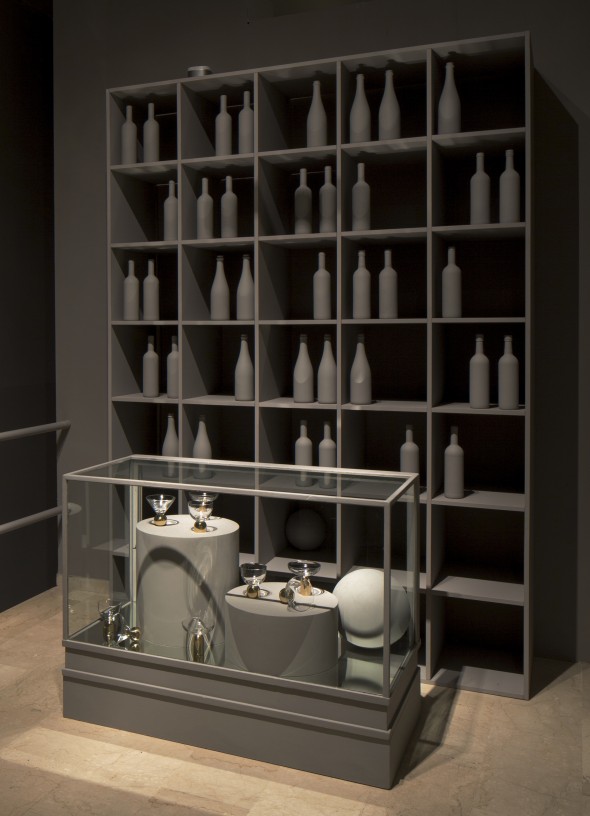 The collection was shown in the “Wine Shop” in front of 38 glass bottles, each of which was individually painted in Broom’s signature grey and shipped over to Milan along with all the other props in the store. “This show is the most theatrical yet,” said Broom. “It’s got a cinematic feel to it, it looks very fake, almost like a film set, which is really nice. Everything is grey, absolutely everything, except for the products, so they really stand out.” 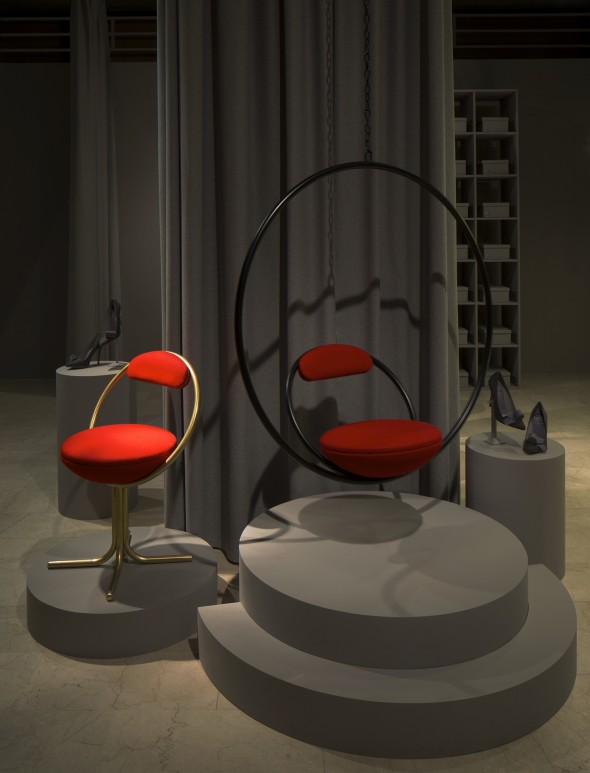 The Hanging Hoop Chair is formed of two circular brass-plated hoops suspended from the ceiling. The two hoops join at the bottom and the inner hoop contains the seat and backrest, upholstered in red or grey Kvadrat wool.

The Hanging Hoop Chair, together with the Hoop Dining Chairs, a similar concept with the inner hoop sitting on a four-footed brass-plated base, were displayed within the “Shoe Department” alongside grey high heels all perched on cylindrical grey plinths. 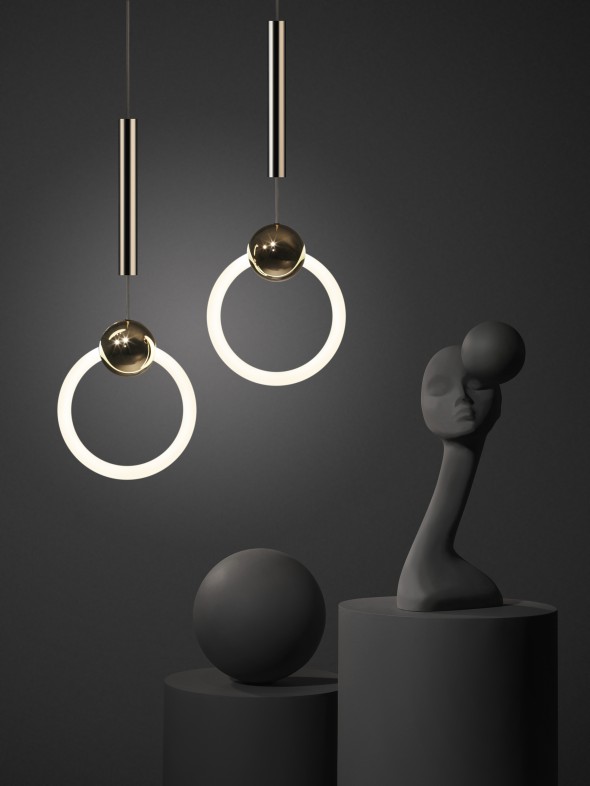 As ever with Mr Broom, there is a hint of the illicit and the Ring Light mimics a contemporary piercing as much as any lighting form. The light comprises a polished brass sphere impaled on a dimmable ring-shaped fluorescent tube. 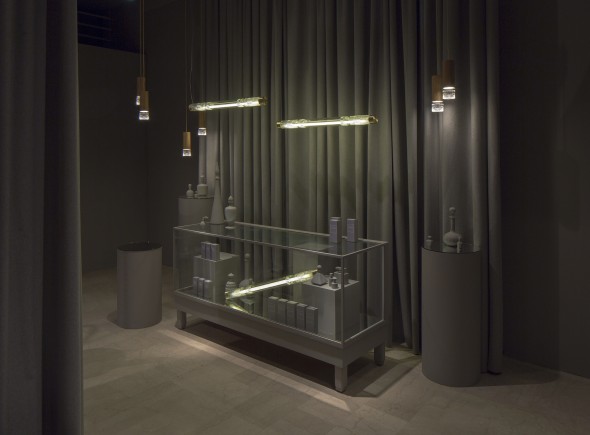 The Crystal Tube is another development of a previous collection. Tube was a hollow cylinder of Carrara marble with LED bulbs inside creating the illusion of a glowing tube of solid marble. For Crystal Tube, the marble is replaced with cut crystal creating a tension between traditional and contemporary lighting archetypes.

The Crystal Bulb was showcased in the Department Store’s Perfumery, alongside the Tumbler Lights and 16 grey-painted perfume bottles and 14 bespoke Lee Broom perfume boxes. 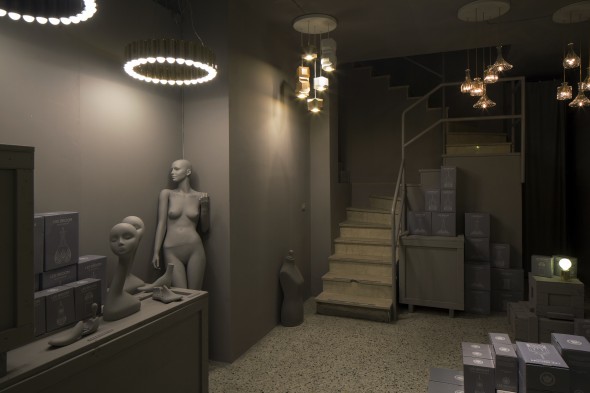 Finally, Broom’s ‘back catalogue’ of existing products such as the Decanterlight, Carousel and One Light Only were displayed in the “Stockroom”.

“I had had the idea of the department store theme in the back of my head for a few years. As soon as I saw this space, I knew it would be the perfect way to display the collection,” said Broom, speaking before the show. “Having had this vision in my head for so long, the most important thing is that it’s as I imagined. The second most important thing is that people really enjoy and understand the experience. It’s not just about furniture and lighting – it’s a show. I hope people get that and that they enjoy it. Milan is very stressful and I’m hoping that the show will kind of be a breath of fresh air.” Now that the show is over, Broom can breathe a sigh of relief – it’s safe to say that it was nothing if not that.