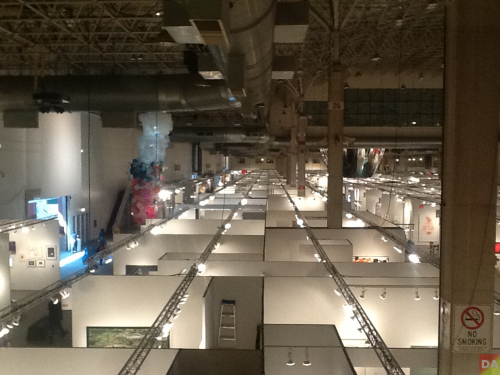 This is Expo Chicago’s third year. Despite two (a minority) DA confidants saying they thought show was unimpressive, I thought it was a refined, albeit, mindful presentation. The presence of George Lucas and ‘curator’ Shaquille O’Neal added dash. Fredric Snitzer added game and we applaud more of it. fyi – jon pylypchuk unsuccessfully attempted to quit smoking. 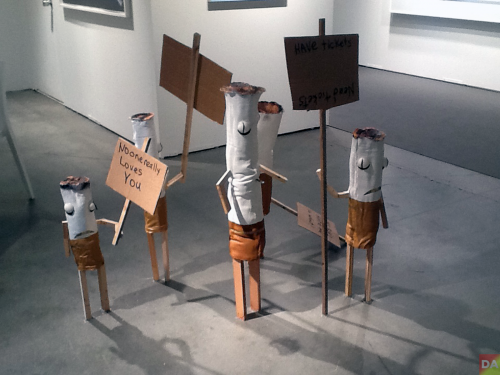 It’s no secret, this is a tough show to get vetted into. The 2014 official release says 140, including special exhibits/projects and Exposure an initiative introducing galleries who are less than seven years old. There are 25 Exposure galleries in 2014. There are 17 countries, 43 cities. In a 2013 interview with president and director Tony Karman, he wants quality over quantity, meaning a smaller show, about 100 exhibitors. ‘When the marketplace can sustain it and quality of dealers are beating down the door, we’ll consider it. But only if the exhibitors want it, not me. It’s their space.’

What does DesignApplause look for? You have to consider our introduction to the co-existence of fine art and design. We have followed Art Basel and DesignMiami for the past six years. We first became very familiar with the design galleries at DesignMiami and then ventured to Art Basel to search for those artworks and artists who do or could also reside in a design gallery. 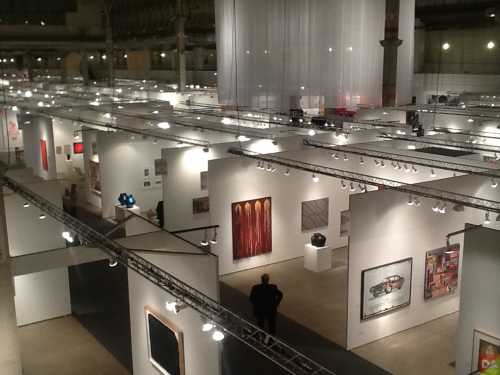 DesignMiami took advantage of the drawing power of fine art over 11 years ago and has become closely entwined with Art Basel. So much so, that in the beginning DesignMiami’s venue was across the bay in the then barren, Miami Design District. For the past three years DesignMiami now resides across the street from Art Basel Miami and the crossover has been seamless.

The Design District has since attracted the best of design-centric brands and there are more and more art and design happenings when both shows are running. You find yourself walking across the street and then going west of the bay. And though ‘Design Weeks” are now too many to count and attend, Basel and Miami are both major worldwide events and unique with its offerings of fine art and design.

The original Expo Chicago concept was for an ‘Art and Design Exposition’ and Karman correctly turned the focus towards fine art and scrapped ‘design’ from the tagline in order to get the new exposition firmly up and running. In 2014, there are special exhibitions and installations at Expo that continue to feature design.

We adapted to Expo’s format by looking for artists with architecture or design backgrounds at the show. It’s impossible to look at a gallery’s offerings and predict the backgrounds of the artists. Each gallery builds their collection differently. From ‘We only focus on fine art’ through ‘No, we’re not showing anyone today with that background. Wait! This artist studied architect and this one studied design. To, ‘We didn’t bring anything to Chicago but we have two artists designing furniture and show it in our gallery in New York.’ 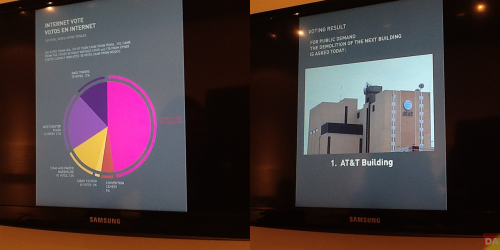 above> a screenshot of two images in a mixed media slide show of artist daniel buren. Buren is a French conceptual artist who’s work since the 1990s has become more architectural. This is a humorous presentation depicting online crowd sourcing, voting to blow up ugly buildings. 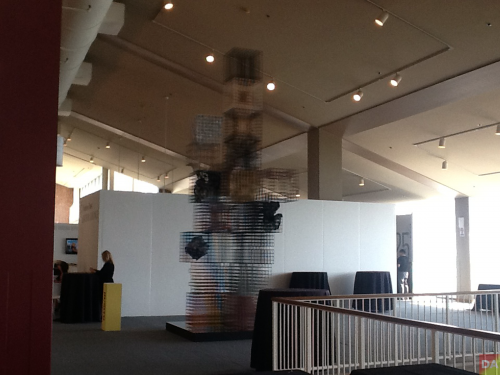 above> Grid Structure #1 uses 22 cubes from the installation at the Bruce Museum in Greenwich, CT. Kronschlaeger says light is always of utmost importance to his site-specific pieces and in this case, the vast space provided at Navy Pier, felt his work taking on a new look, a new personality of sorts. The gallery told us Kronschlaeger is an artist wanting to be an architect. 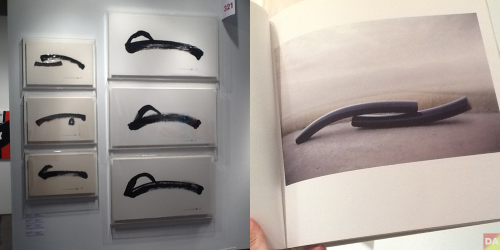 above>> we see a series of ‘one stroke’ concept drawings by artist Byung Hoon Choi of outdoor benches made of basalt. The fine artist teaches furniture design. 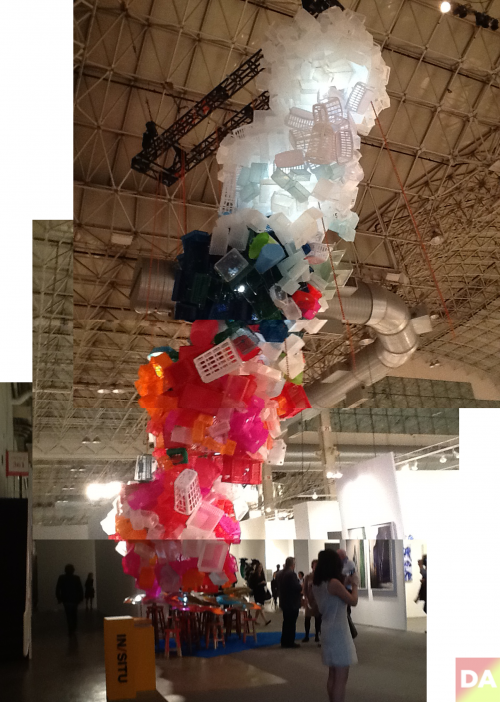 above> ‘Once Upon a Time stretches vertically 50 ft. high in response to the specific architecture of the fair. Spectators are invited to climb the work to take a fractured view through the artwork over the exhibited works and gallery booths. This transformed view takes place once, exemplifying Stockholder’s title, upon a specific place at a particular time.’ The installation is part of IN/SITU, a ‘special program’ situated throughout the exposition floor. IN/SITU provides a dynamic opportunity for exhibiting galleries to showcase large-scale installations, site-specific and performative works. DesignApplause includes Stockholder as a counterpoint to our architecture and design theme. She is trained in neither disciplines, but the artist has been celebrated for site-specific sculptures and installations that challenge boundaries, ‘blurring the distinction among painting, sculpture and environment, and even breaching gallery walls by extending beyond windows and doors.’ 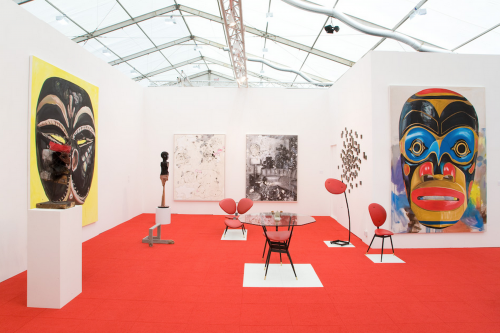 Salon 94 in New York said they weren’t showing any architects or designers but had several back in their showroom. 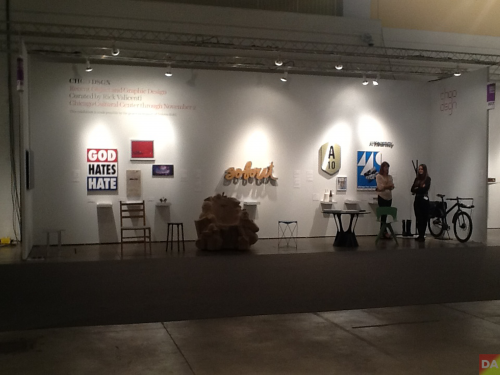 above> One of several ‘special exhibitions’ CHGO DSGN is a major exhibition of Recent Object and Graphic Design by more than 100 of the city’s leading designers. Curated by Rick Valicenti, 2011 recipient of the Smithsonian Cooper-Hewitt National Design Award, 25 designers from CHGO DSGN present their work. The Chicago Cultural Center’s exhibition programs are generously supported by the City of Chicago and the Chicago Department of Cultural Affairs and Special Events (DCASE). DesignApplause is honored to be in this CCC exhibit. [ details ]

EXPOSURE, the section of the fair dedicated to galleries that have been in business seven years or less, allows the opportunity for younger galleries to participate in a major international exposition. Chosen by the 2014 EXPOSURE selection committee comprised of Candice Madey, On Stellar Rays | New York and Jessica Silverman, Jessica Silverman Gallery | San Francisco—who participated in the EXPOSURE section in 2012 and 2013 and have now entered into the main section of the fair—a special presentation of one or two artists by each of the participating galleries provides critical exposure for their programs, offering an important opportunity for curators, collectors and art enthusiasts to survey the best in innovative and emerging work.

above: illustrator serge bloch // “a designer who can’t sketch is like a journalist who can’t write!” ~ nike creative director // editors note: this post amended 14 november 2018.

Slowing the thought process down
Does sketching provide an advantage at the critical product collaborative phase with the client ? While computers can explore options quickly, sketching slows the design process down which is also desirable because clients like getting involved earlier in the concept and the sketch seems to do that. 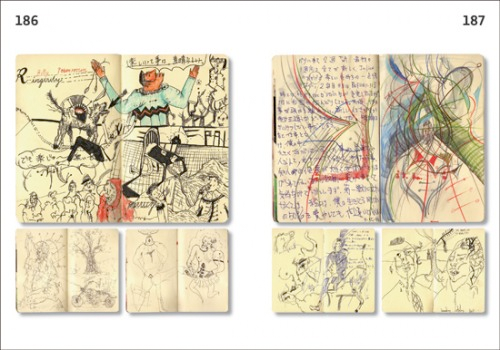 above: sketchbooks by hiro kurata 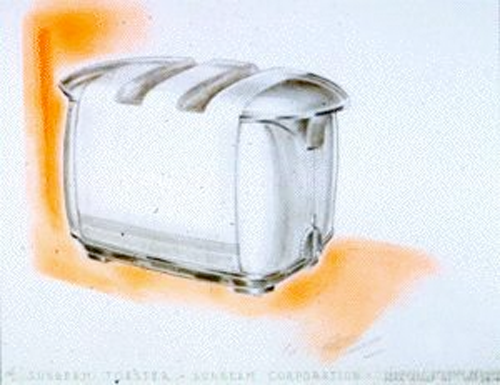 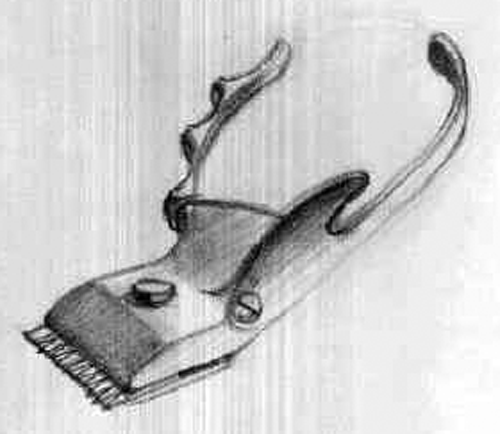 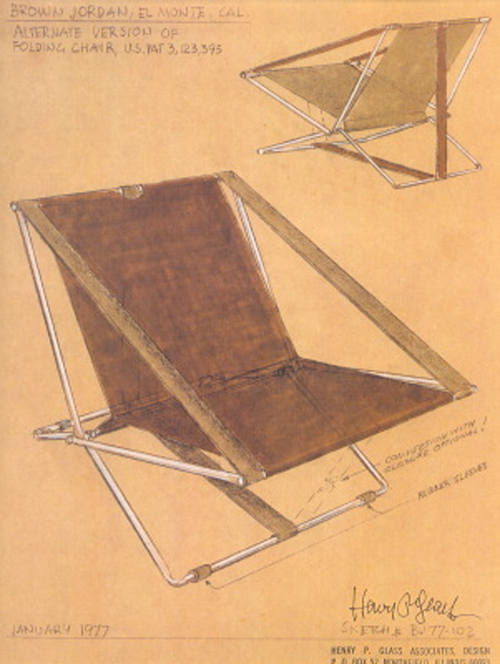 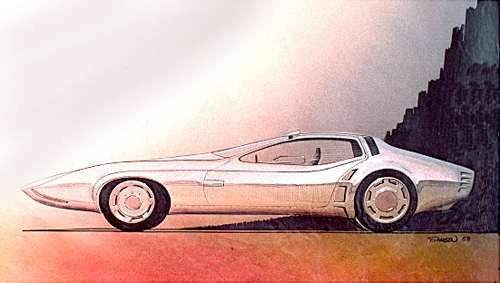 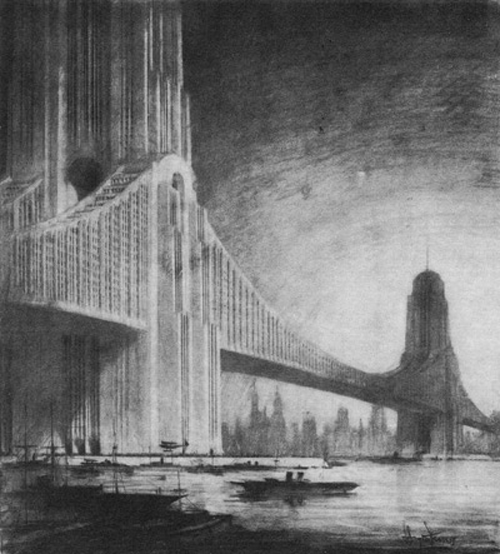 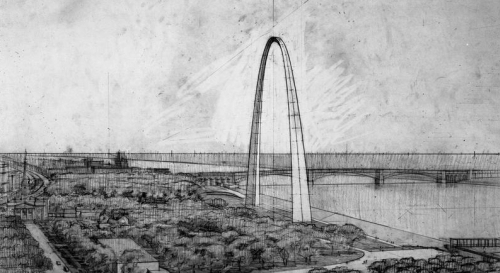 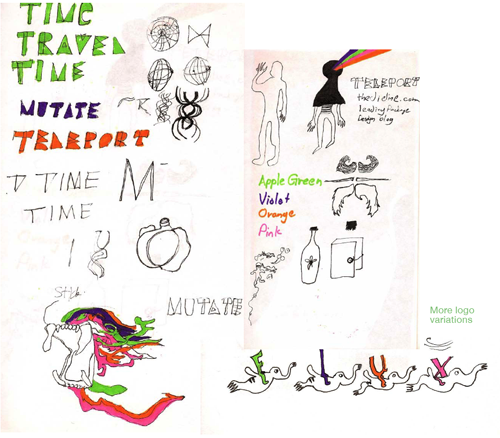 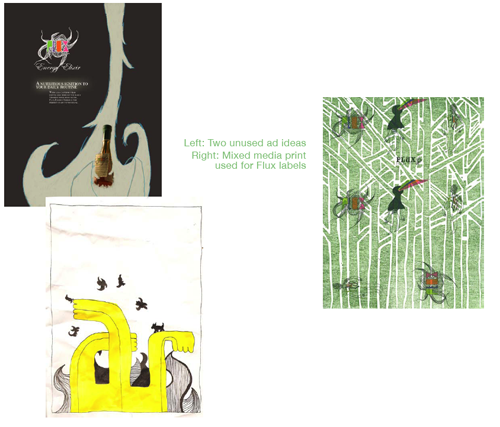 I teach a graphic design course, Introduction to Graphic Design at Columbia College Chicago, comprised of graphic design, advertising, and illustration students. It’s a semester-long assignment where they have to create a product/service, name it, design a logo, create five marketing mix concepts, a complex design solution that involves both graphic and product thinking. This course for me was a bit of a revelation regarding the designer vs illustrator comparison: though all students will be sketching concepts, design and advertising majors tend to conceptualize on the computer while illustrators rely on drawing skills to concept as illustrator asif ahmed demonstrates above. asif’s concept exploration also seemed to draw him more into hypothetical branding touchpoint applications.

Am I a good sketcher? There were no computers for my earlier jobs but I had some skills. Today I can relate more closely to bloch and eames.

Select comments from resources below:
Good sketcher says, “Sketching is a must! Bad sketcher says ”Sketching isn’t all that important, what about model making?!” // “A couple of good points, but it still doesn’t negate that sketching well is the cost of entry. I think this piece explains why sketching isn’t just important to get a job, but an essential part of the the process.” // “Drawing is very closely linked to thinking, and building something in your head.” ~ architect