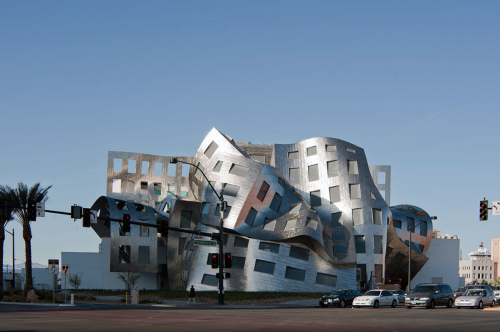 In architecture I love minimal, efficient, and white cubes that let outside light generously pour in and its structure does not get in the way of its function. I also love modern sculpture and modern roller coasters. Architect, product designer, Frank Gehry for sure gets my divided attention. Here’s his latest structure, the Cleveland Clinic Lou Ruvo Center for Brain Health in Las Vegas, Nevada. Groundbreaking in 2007, open for patient care in 2009 and completed in 2010. 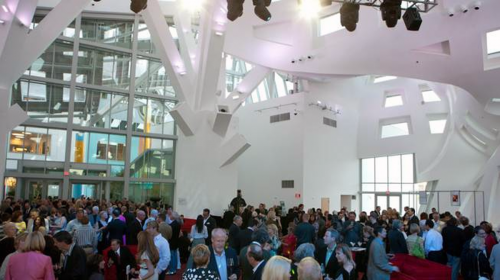 Gehry agreed to design the building only after discovering he shared a bond with its founder, Larry Ruvo. Both men suffered personal losses to degenerative brain diseases. Ruvo lost his father to Alzheimer’s disease and Gehry’s analyst’s wife succumbed to Huntington’s disease. The $100 million complex comprises two wings connected by an open courtyard: a dedicated research center, located at the northern end of the building, and a ‘for-hire’ event space, dubbed the Life Activity Center, located at the southern end. Architecturally, the two spaces are dramatically different and yet together they form a cohesive whole. A four-story clinic, houses medical offices, patient rooms and research space, is rational, conventional, and rectilinear in geometry. By contrast, the Life Activity Center ( above photo ) is a soaring sculptural volume tucked beneath a signature Gehry stainless steel roof. Designed as an event space, proceeds fund the center’s research. 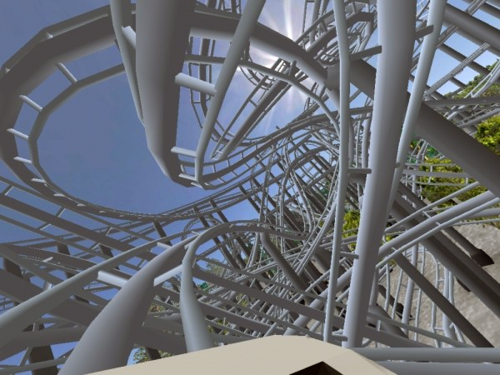 above: air coaster XL roller coaster simulator app made with a multitouch 3D interface, so un-CAD. below: building super-structure. 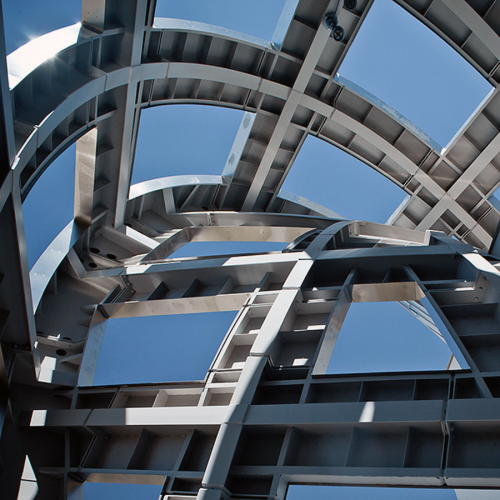 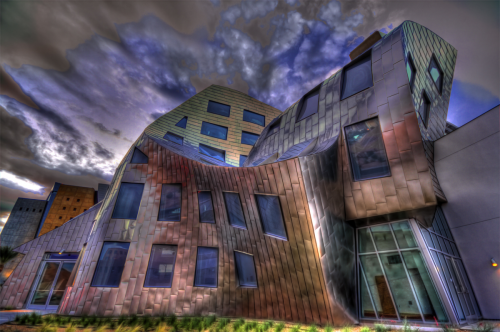 The Center operates as an outpatient treatment and research facility and includes 13 examination rooms, offices for health care practitioners and researchers, a “Museum of the Mind,” and a community auditorium. The Center also serves as the headquarters for Keep Memory Alive Foundation (owner of the building), the Las Vegas Alzheimer’s Association and the Las Vegas Parkinson’s Disease Association.

[ frank gehry ]
Frank Gehry grew up in Canada. In his free time as a child, he would make small versions of buildings out of pieces of wood. In 1947 his family moved to the United States. That is where Frank Gehry began his university studies in architecture. He believes that architecture is art. He has said that, in some ways, he has been more influenced by artists and sculptors than by architects. This may be why his buildings often look like energetic sculptures made from bold geometric forms.

Gehry’s body of work favors the style of Deconstructivism, which is often referred to as post-structuralist for its ability to go beyond the modalities of structural definition. Its architectural application tends to depart from modernism in its absence of cultural givens such as societal goals and functional necessity. Deconstructivist structures are not required to reflect specific social or universal ideas, such as speed or universality of form, nor a belief that form follows function per early modernist structures. Gehry’s own Santa Monica residence, which he applied his conceptual studies into a reality, is a commonly cited example of deconstructivist architecture, as it was so drastically divorced from its original context, it cloaks its original spatial intention.

Gehry’s style sometimes feels unfinished using inexpensive found objects and non-traditional media such as clay and has been called “the apostle of chain-link fencing and corrugated metal siding”.

There are critics. Art historian Hal Foster reads Gehry’s architecture as, primarily, in the service of corporate branding. Other complains include complaints that the buildings waste structural resources by creating functionless forms, do not seem to belong in their surroundings and are apparently designed without accounting for the local climate.

Famous examples of Frank Gehry’s work include the “Dancing House” in Prague, the capital of the Czech Republic. This playful building, finished in 1996, looks like two dancers. His most famous building is the Guggenheim Museum in Bilbao, Spain. It was completed in 1997. Most of the curving building is covered in titanium. It looks like a dancing metal wave sitting on the edge of a river. The curved surfaces of this building and others by Frank Gehry are so complex to build that they require computer programs.

Frank Gehry’s buildings are so popular that some people say they create a “Gehry effect.” This term is used for a building that attracts visitors because of the architect who designed it.

To Gehry’s credit he has an ability to conceive and execute his surreal sculptural architecture. As there are critics of flying to the moon or jupiter, Gehry’s architecture is akin to space exploration. His work does inspire and someone will figure out how to apply concepts that will be less costly and more sustainable to build. [ gehry partners ]