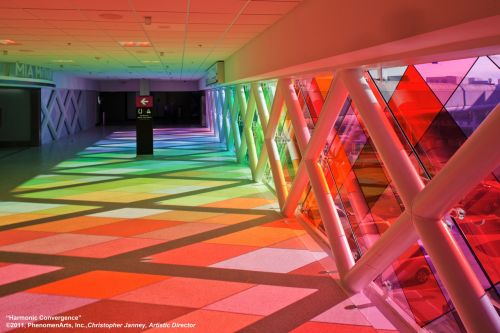 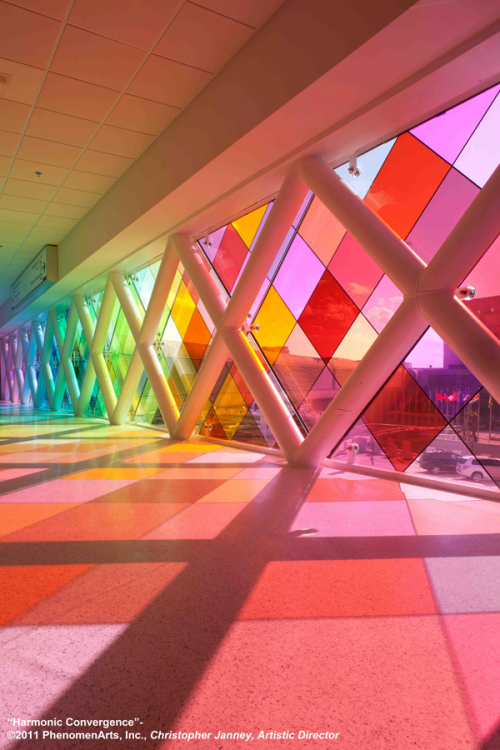 Harmonic Convergence features a 72-foot-long glass window wall utilizing over 150 transparent colors. The project is part of Miami-Dade County’s Art in Public Places program and located in the connector walkway that is the entrance into the airport. As travelers enter the space, they’ll hear a complex set of sounds Janney recorded during trips to the Florida Everglades, scuba dives in the ocean, and other natural environments of South Florida. In addition, two video cameras installed in the ceiling feed information to the computer regarding the pedestrian activity within the space, influencing the density of the sound-score. At the top of each hour, a short composition with percussion instruments plays, marking the time of day. “This is my fifth project in South Florida,” Janney states. “It is one of my favorite places in the world. I love the sounds of the subtropics most particularly the Everglades, the ocean shore and underwater sounds, especially sounds both real, as in whales and porpoises, and imagined, i.e. mermaids and Atlantis.”

Harmonic Convergence replaces Janney’s 1997 airport commission Harmonic Runway, removed after changes to the airport due to 9/11 security. That former artwork had become an icon of South Florida, featured in magazines and films including Harrison Ford in, “Random Hearts” and Nicholas Cage in, “8MM.”

[christoper janney ]
Trained as an architect and jazz musician, Janney is an American artist whose work explores the relationships between sound and architecture, often-transforming otherwise ordinary spaces into “hyper-reality” environments. Educated at Princeton University and the Massachusetts Institute of Technology, Janney has explored the intersection of architecture, creating temporary and permanent installations throughout the United States and Europe. Soundstair on the Spanish Steps in Rome; Sonic Forest at the Bonnaroo and Glastonbury Music Festivals. He’s well known to Miami sports fans for his Turn Up the Heat interactive “anemone” scoreboard created for the Miami Heat’s American Airlines Arena. [ christoper janney ]