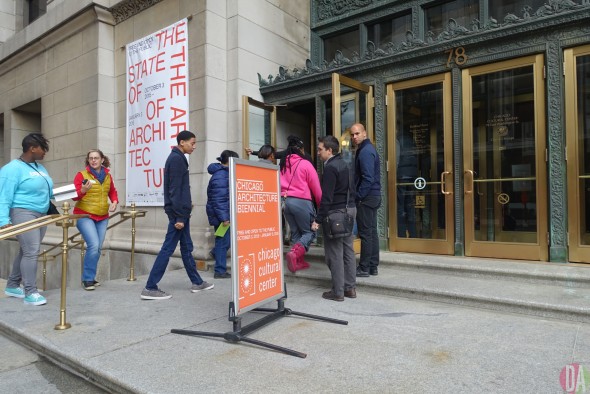 [ 29 november > 5 december calendar ] The Chicago Architecture Biennial is free and open to the general public at the Chicago Cultural Center and sites across the city. The event is supported by the City of Chicago and the Graham Foundation, with additional support from the Chicago Department of Cultural Affairs and Special Events, and the Chicago Park District. All funding for the event is privately raised, with significant investments from BP and SC Johnson. 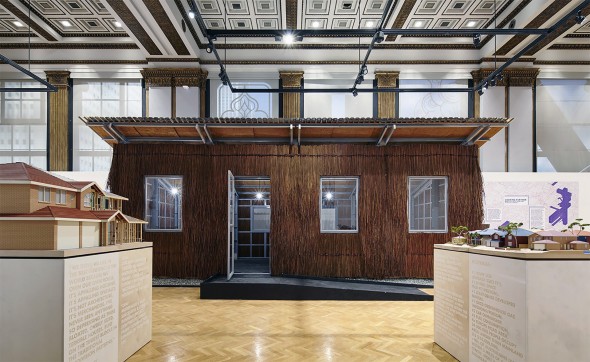 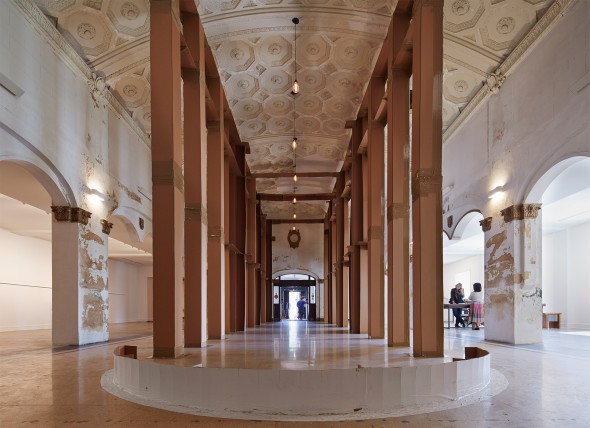 the main floor of the stony island arts bank will be used for exhibitions, like the current show by carlos bunga. courtesy chicago architecture biennial. image steve hall 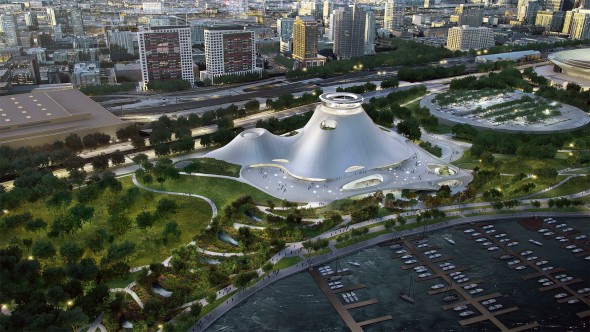 A month following a new second proposal from [ Mad Architects ] for the Luca Museum, the Chicago Park District today signed off on a 99-year lease for filmmaker George Lucas’ proposed museum along Lake Michigan in the Museum Campus.

Current plans for the $400 million project call for a 300,000-square-foot structure with nearly five acres of green space. Construction could begin as early as next spring and the museum could be operating by 2019 or 2020.

The CPD vote was unanimous, approving the $10 lease on the lakefront property for the nonprofit Lucas Museum of Narrative Art. The lease still has to be approved by the city’s Department of Zoning and its Plan Commission. 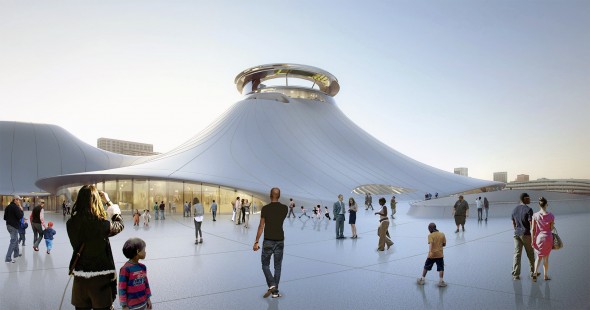 rendering of the visitor experience on the public plaza of the lucas museum of narrative art. the plaza as well as the surrounding greenspace will be open and accessible to park visitors. 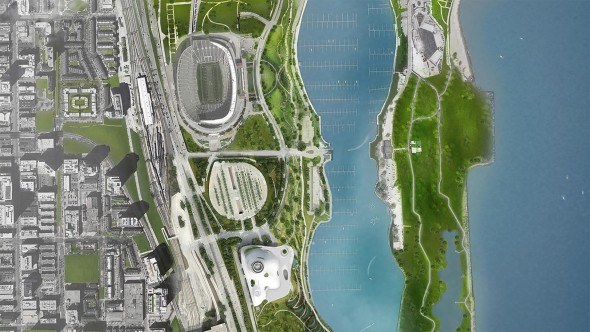 an aerial view of the the lakefront site. 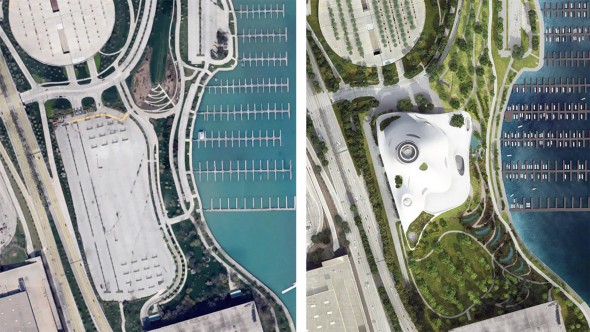 a side-by-side comparison of the lakefront site as it currently exists and how it will look with the museum and accessible, added green space in place.

Nonprofit group Friends of the Parks is suing the Chicago Park District to prevent the museum from being built south of Soldier Field.
[ second museum proposal ] [ original museum proposal ]

The shoreline of Lake Michigan has always played a central role in Chicago’s urban identity. During the 1893 World’s Columbian Exposition, architect Daniel Burnham sought to incorporate the lake into the fairgrounds, and his 1909 Plan for Chicago proposed to reclaim the entire length of the lakefront as a place of leisure for all inhabitants of the city—an idea realized during the 20th century. Today, the lakefront is a celebrated and heavily used public space that is a major destination for both visitors and local residents. It features over twenty miles of public parks and beaches, as well as pedestrian and cycling routes.

The Chicago Park District currently oversees over forty kiosks that punctuate the shoreline, which during the summer offer food, retail, and recreational services—ranging from beverages to clothing to surf rentals.

The Chicago Architecture Biennial will unveil four new kiosks. One will be decided through an international competition, and the other three will be designed through collaborations between local architecture programs and internationally-renowned architects. The winning competition entry and the three commissioned kiosks will be displayed in Millennium Park during the Chicago Architecture Biennial (October 2015 – January 2016). In the spring of 2016, all four kiosks will be installed on the lakefront.

[ grant park ]
Grand Horizon won an international design competition organized by the biennial drawing 421 entries from 40+ countries. The jury likened this steel-framed, flat-roofed structure, to that of Chicago’s Ludwig Mies van der Rohe. After being displayed in Millennium Park, the kiosk moves in 2016 to Queen’s Landing, an empty plot east of Lake Shore Drive and opposite Buckingham Fountain. The plot is named from a 1959 Chicago visit by Queen Elizabeth II.

“Instead of creating an object that people would look at and marvel, we created something that would be inhabited, something that would create an interface between the biennial and the public at large,” said Providence, R.I., architect Aaron Forrest. He designed the kiosk with fellow faculty members at the Rhode Island School of Design: architect Yasmin Vobis and structural engineer Brett Schneider.

The competition winner, Grand Horizon, will receive the BP (BP is the biennial’s lead sponsor) Prize, which includes a $10,000 honorarium and a $75,000 budget to realize the design. It’s estimated to relocation to Queen’s Landing will cost another $25,000.

The other kiosks will be built in collaboration with Chicago’s architecture schools. The biennial is supplying $50,000 apiece for their construction 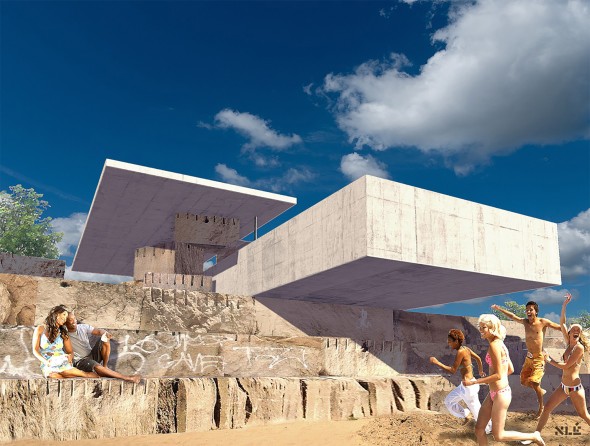 [ lincoln park – montrose beach ]
At Lincoln Park’s Montrose Beach, Nigerian architect Kunle Adeyemi calls for a pavilion that boldly projects over stepped limestone blocks at the shoreline’s edge. The School of the Art Institute will collaborate on the project, which could serve as a grab-and-go version of a restaurant at Montrose Beach, Herda said.

Built out of concrete and limestone and meant to recall the stone blocks that protects the city’s shore, the cantilevered pavilion will project out over the beach providing shelter and a meeting place on the beach. The School of the Art Institute will collaborate on the project. The kiosk will be represented in some form in Millennium Park but won’t be built there because of its complex construction. 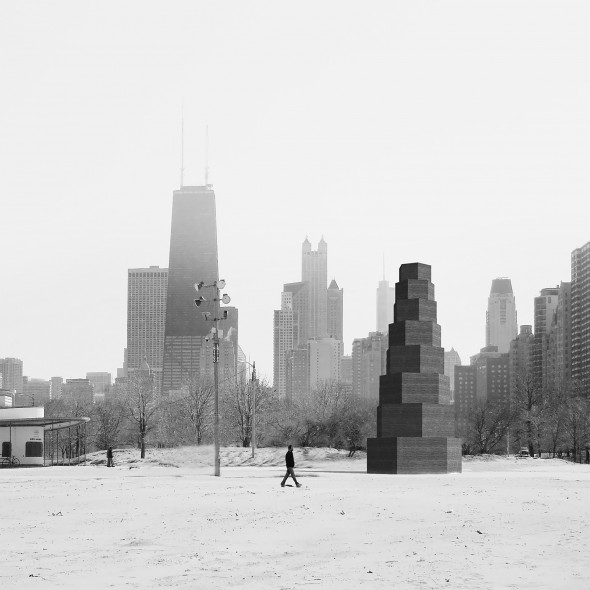 [ lincoln park – north avenue beach ]
Chilean architects Mauricio Pezo and Sofia von Ellrichshausen have designed a 40-foot ziggurat made of stacked wood shapes. Wide doors will lead into the ground floor of the kiosk, which will contain a commercial space and be lit by skylights, Sarah Herda, the biennial’s co-curator, said. Collaborating is the Illinois Institute of Technology. 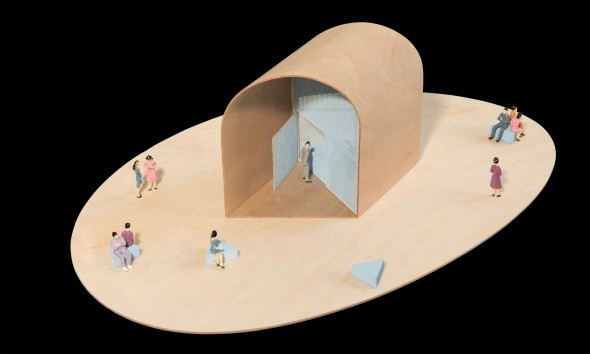