"Pillow" workshop for children at the centre pompidou-metz. 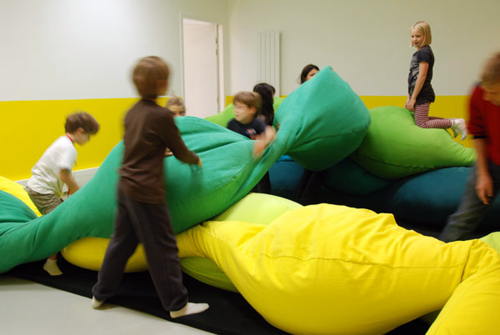 For the children’s workshop at the Centre Pompidou-Metz, Les M have designed a world which is soft and bright, a sort of giant, soft rug filled with multicolored big fluffy pillows. With “Pillow,” Les M are pursuing their exploration of oversized comfort which began with “Cocon,” the combination of a cover and an armchair manufactured by Super-ette in 2010. A ‘nest cushion’ enlarged to the scale of a room, “Pillow” promises a playful and creative space for children who are good with their hands as well as builders looking for a pillow-fight! 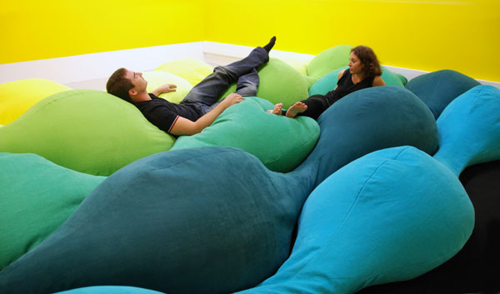 Les M, designers, Céline Merhand and Anaïs Morel, brought together under the label ‘Les M,’ have worked together for four years. Graduates of the School of Fine Arts in Rennes, their degree projects were funded by VIA and presented at the gallery with the same name in 2007. After attracting attention the following year during the St Étienne International Design Biennial, their creations were presented at Brasilia and Rio de Janeiro as part of France in Brazil in 2009. Nominated for the Création de la ville de Paris Grand Prix in 2010, they exhibited at the Salon Maison et Objet in September, and went into partnership with the new firm Super-ette based in Luxembourg for the production of the Cocon armchair. 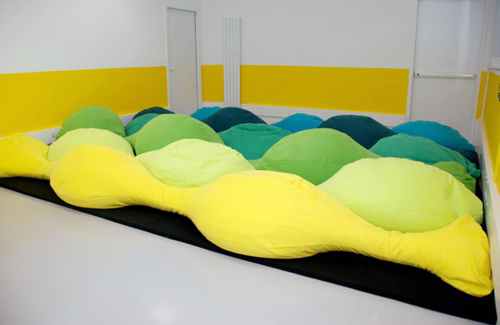