participatory city: 100 urban trends from the bmw and guggenheim lab.

BMW’s three year collaboration with the Guggenheim museum explored the subject of the city and established urban labs in New York, Berlin, and Mumbai. Now some of the results are being displayed at the Guggenheim’s building in New York. There are objects, like the water saving park bench from Mars architects, and images, like smart data maps. 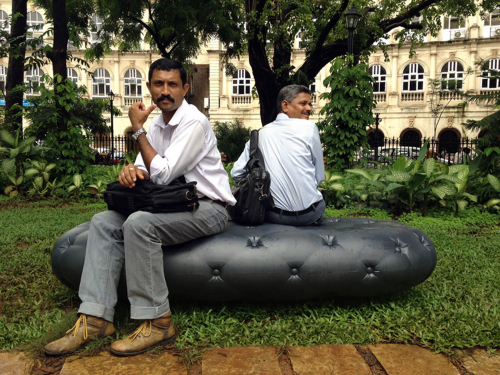 MARS architects (neville mars) was commissioned by the BMW guggenheim lab to participate in the think tank’s long-term vision to develop interventions that would benefit our cities and greater urban environments. for their participation, the international firm focused on water concerns, creating an outdoor piece of furniture that collects and stores rainwater through functional cushions

The exhibition also features prototypes of the Water Bench, a project developed during the Mumbai Lab by architect Neville Mars of MARS Architects. Created to address water scarcity and the need for leisure space in Mumbai, the Water Bench collects rainfall for re-use in irrigation and provides public seating. A prototype of the Water Bench is planned for First Park in New York, the original site of the Lab, and six more currently are installed throughout Mumbai. 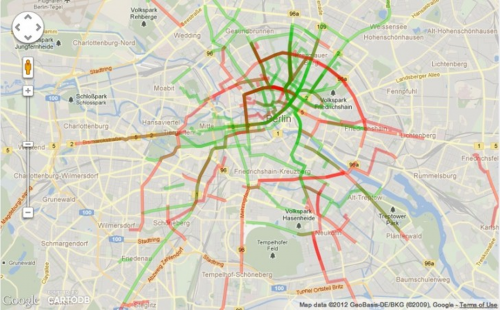 [ official bmw release ]
Participatory City: 100 Urban Trends from the BMW Guggenheim Lab, an exhibition summing up the experiences and concepts generated during the two-year run of the BMW Guggenheim Lab, will be presented from October 11, 2013 to January 5, 2014, at the Solomon R. Guggenheim Museum. The exhibition is the culmination of the Lab – an urban think tank, community center, and public gathering space – that traveled from New York to Berlin and Mumbai to inspire innovative ideas about urban life and new ways of thinking about cities. Tens of thousands of participants engaged with the Lab’s free public programs, urban projects, and research initiatives, both on-site and online, which informed and helped shape the exhibition. The BMW Guggenheim Lab is a co-initiative of the Solomon R. Guggenheim Foundation and the BMW Group.

“With the BMW Guggenheim Lab, we have extended our mission beyond the walls of the museum, providing the Guggenheim with new ways to engage directly with the public and demonstrate our commitment to innovation in the fields of architecture and urbanism,” said Richard Armstrong, Director of the Solomon R. Guggenheim Museum and Foundation. “The Lab ignited an important conversation about the differences and commonalities of urban environments and the power of cities as idea-makers. The Participatory City exhibition brings together the ideas found along the way, celebrating this journey and showcasing the extraordinary people and places we encountered.”

“With the New York exhibition, the BMW Guggenheim Lab adventure comes full circle. During its travels, the Lab connected people from around the world to address the challenges that so many megacities face today and in the future. Each and every one of these people who actively participated in this project, be it online or on site, are the reason for the Lab’s success,” said Maximilian Schöberl, Senior Vice President, Corporate and Governmental Affairs, BMW Group. “The exhibition allows us the opportunity to reflect on the Lab as a whole to better understand how this thinking will continue to inform urban life.”

Participatory City is organized by Maria Nicanor, Curator of the BMW Guggenheim Lab and Associate Curator, Architecture and Urbanism.

[ exhibition overview ]
Participatory City is inspired by 100 of the most talked-about ideas in urban thinking explored at the Labs in New York, Berlin, and Mumbai. The terms, or trends, featured in the exhibition have been selected from 100 Urban Trends: A Glossary of Ideas from the BMW Guggenheim Lab, which includes a total of 300 terms compiled from the three Lab venues. New and old, established and of-the-moment, these terms all relate to the ways we understand, design, and inhabit cities. Each term references a particular Lab event or experience, highlighting participatory programs, tours, talks, workshops, film screenings, and urban research projects offered in each city. Projections of these terms alongside drawings, sketches, and short videos representing the terms will continuously loop on the gallery walls in an all-digital installation. Videos and images from each of the three cities will bring the Labs to life throughout the exhibition. In addition, a global roster of architects, academics, designers, and artists have created digital responses to the 100 Urban Trends, available at youtube/bmwguggenheimlab

Participatory City examines a wide variety of trends, a number of which address how we interact with cities. These include:

Participatory Urbanism, a concept integral to the programs in New York, Berlin, and Mumbai, in which citizens are empowered to collect data and contribute ideas to urban decision-makers;
Ostrich Effect, a topic discussed in Mumbai that describes how individuals convey their indifference to the harsh conditions of everyday street life;
Collaborative Urban Mapping, an example of a small-scale intervention in an urban environment, which was produced through collaboration and open-source data in Berlin to map elements of the food supply chain;
Suburban Sprawl, representing outward urban growth;
and the concept of Happy City and psychological well-being in urban environments.
Other trends include the 3D Printer revolution that has led to increased Customization; Arduino, hardware developed for operating robots; and urban concepts such as 10,000 Honks, Bottom-Up Urban Engagement, Collective Memory, The New Architect, Eviction, Food Distribution, Gentrification, Infrastructure of Waste and Non-Iconic Architecture, among others.

“Cities are concentrations of buildings, streets, transportation systems, and physical infrastructure, but it is people who are at the center of urban discourse and it is people who, through participation and interaction, continue to make cities vibrant centers for the generation of ideas that shape our world,” said Nicanor. “It is this sense of participation that continues to empower urban progress one idea at a time. Participatory City documents the BMW Guggenheim Lab’s journey to identify some of the most urgent challenges for cities today and the ideas that could help improve them.”

The exhibition also features prototypes of the Water Bench, a project developed during the Mumbai Lab by architect Neville Mars of MARS Architects. Created to address water scarcity and the need for leisure space in Mumbai, the Water Bench collects rainfall for re-use in irrigation and provides public seating. A prototype of the Water Bench is planned for First Park in New York, the original site of the Lab, and six more currently are installed throughout Mumbai.

[ public programs ]
Throughout the run of Participatory City, a series of public programs focusing on a selection of the 100 Urban Trends expand on the issues and projects explored by the BMW Guggenheim Lab.

Sun, Dec 1, 6:30 pm / Rainwater Harvesting: Neville Mars
Neville Mars, architect, founder of Dynamic City Foundation, and former Lab Team member, discusses his interest in design solutions that conserve water and how it led to the creation of the Water Bench, an urban bench that collects rainwater for re-use.

Fridays, Oct 11-Jan 3 (except Nov 29), 3 pm / Film Series: Cinematic Sites
Selected by Paul Dallas, organizer of the BMW Guggenheim Lab’s film program in New York in 2011, this series examines the relationship between the urban environment and cinematic storytelling. The series includes films set in the Lab venues of New York, Berlin, and Mumbai as well as other cities around the world including Cairo, Chengdu, Los Angeles, Recife, San Francisco, Tehran, and Vienna.

Programs are $7, $5 for members and free for students who RSVP. Films are screened in the New Media Theater, Lower Level and are free with museum admission. [ details ]

[ bmw guggenheim lab ]
A co-initiative of the Solomon R. Guggenheim Foundation and the BMW Group, the BMW Guggenheim Lab launched in New York (August 3 – October 16, 2011) with a focus on the theme “Confronting Comfort;” traveled to Berlin (June 15 – July 29, 2012), with the theme “Making,” emphasizing citizen participation in shaping cities; and finally opened at multiple sites in Mumbai (December 9, 2012 – January 20, 2013), where projects and programs explored the theme of “Privacy.” Participants from more than 160 countries and territories around the world participated in the Lab’s nearly 600 public programs, workshops, lectures, and research and urban projects, both on-site and online. The BMW Guggenheim Lab’s global program concludes with the exhibition Participatory City: 100 Urban Trends from the BMW Guggenheim Lab, on view at the Guggenheim Museum, New York from October 11, 2013 to January 5, 2014. The BMW Guggenheim Lab was curated by Maria Nicanor of the Solomon R. Guggenheim Museum and David van der Leer.

The mobile structures for the Lab were designed by the Tokyo architecture firm Atelier Bow-Wow, including a novel carbon-fiber structure used in New York and Berlin and a set of bamboo structures installed at multiple locations in Mumbai. The graphic identity of the Lab, which included an interactive logo, was developed by Seoul-based graphic designers Sulki & Min. Together with Guggenheim curators, three Lab Teams composed of individuals from a variety of disciplines developed programs specific to each city.

[ about the Lab ] [ 100 Urban Trends: A Glossary of Ideas from the BMW Guggenheim Lab ]

[ bmw’s cultural committment ]
For over 40 years now, the BMW Group has initiated and engaged in more than 100 cultural partner-ships worldwide. The focus of this long-term commitment to culture is modern and contemporary art, jazz and classical music as well as architecture and design. BMW has worked with artists such as Ger-hard Richter, Andy Warhol, Roy Lichtenstein, Olafur Eliasson, Jeff Koons, Zubin Metha, Daniel Baren-boim and Anna Netrebko and commissioned architects such as Karl Schwanzer, Zaha Hadid and Coop Himmelb(l)au. In London, BMW in partnership with the London Symphony Orchestra, hosts the BMW LSO Open Air Classics, a yearly live concert free of charge in Trafalgar Square, and supports Frieze Art Fair. The BMW Group takes absolute creative freedom in all the cultural activities it is involved in for granted – as this is just as essential for groundbreaking artistic work as it is for major innovations in a successful business. [ details ]

The BMW Group
[ the bmw group ]
The BMW Group is the leading premium manufacturer of automobiles and motorcycles in the world with its BMW, MINI and Rolls-Royce brands. As a global company, the BMW Group operates 28 pro-duction and assembly facilities in 13 countries and has a global sales network in more than 140 coun-tries.

The success of the BMW Group has always been built on long-term thinking and responsible action. The company has therefore established ecological and social sustainability throughout the value chain, comprehensive product responsibility and a clear commitment to conserving resources as an integral part of its strategy. [ details ]