You’ve seen these buildings before but not together like this. Istanbul headquartered Tabanlıoğlu Architects is the only architectural office to win three trophies at the international award program ‘The Plan’, part of Perspective Europe 2015.

A major event on the European architecture and cultural scene, founded in 2010, Perspective Europe is the inspiring two-day international architecture forum to share ideas, research and business opportunities, with a world leading program of conferences, keynote lectures, workshops and meetings.

Selected for their outstanding architectural innovation and social responsibility, the international jury selected three Tabanlıoğlu projects as the winners in their category:

Dakar Congress Centre, in the category for Business,
Bodrum International Airport in the Transport category
Astana Train Station in the categories of Future Projects and Transport

above> Winner in Business – Dakar Congress Centre, Senegal, 2014
A roof for peace: Natural values are the inspiration of project. Inspired by Baobab trees of Senegal, distinctive with their enormous girth; kings were crowned beneath the tree and they mark public squares. Like being sheltered by an ancient monumental tree, a one-piece roof encases the complex building units, which are connected via water and bridges. Blocks are nested in a metal envelop as sun-break, twisted blades form texture of mesh. Reflecting on water, floating expression of building becomes a dramatic illustration. Entrances are at all sides. Main hall is for 1500 delegates where presidents face audience. The complex houses a museum, restaurant and other facilities open to public. 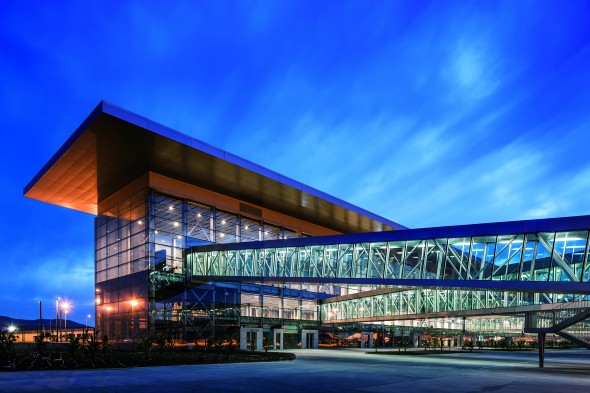 above> Winner in Future Projects and Transport – Bodrum International Airport, Turkey, 2012
Balance of Light and Shadow: Defined as “non-place” according to Marc Augé, the terminal building is one of the most typical examples of standard spaces you can see all around the world. Although such buildings are accepted to be the embodiment of globalization and super-modernity, Bodrum Airport aims to get rid of the pressure and monotony created by compulsory standards and becomes a special spot, not only for travel, but also significant to the region it connects. The sense of wealth created with minimum use of columns, high ceilings and optimum daylight received through sides and roof relieves the tension of journeys event at the most depressing straits such as the security search and passport check points. The suspended ceiling made up of light-weight aluminium rods facilitates the maintenance process of the mechanical systems behind it. The integrity and one-piece impression is enriched by the harmony of material, supported by opaque, screen printed or sheer glass and local natural stone on different directions of façades. Use of local black marble on the floors emphasizes the effect of continuity and depth in the terminal.

above> Winner in Future Projects and Transport – Astana Train Station, Kazakhstan, 2013 – under construction
Connecting places and people: Located on the axial ceremonial route from the Presidential Palace, the new train station promotes a positive change starting from the close vicinity as the synergetic effects of transportation investments are highly upgrading for the regions that become a part of the network. The public realm, because of its anticipated intensive usage, is highly legible, robust and sustainable. Articulating the urban space, the structure of the roof is considered as a major element in building the space. The monolithic roof system is an integral part of the structure of the station. The main bearing construction of the light-weight roof is steel; the design refined to optimize strength and stiffness, and provides an economical yet durable configuration with good resistance against weather conditions.

[ the plan award ] The projects were shortlisted from more than 500 entries that were presented by their architects before the international jury members, including Aldo Cibic, Christian de Portzamparc, Matteo Thun, Odile Decq, Xiang Ning Li and Sanjay Puri during the Forum, at which, Murat Tabanlıoğlu further took part as a key lecturer.