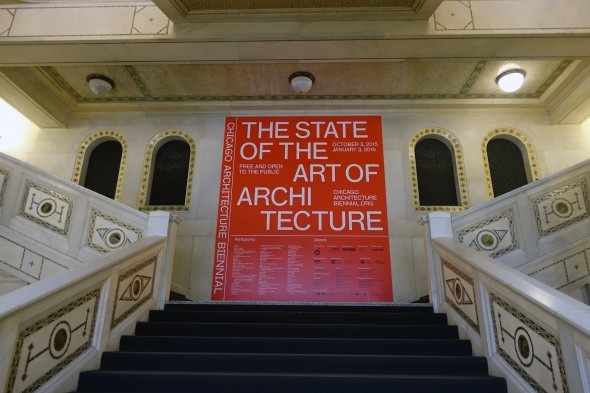 We’ve used this intro in another post [ see talking to michelle boone ]: It’s hard to believe that 2015 is the launch date of the first Chicago Architecture Biennial. With so many major worldwide architecture & design events going on and with Chicago’s architectural heritage being one of the richest in the world, this event will serve as the epitome of ‘it’s never too late.’

There are more of the younger, emerging talents than the acclaimed, a not uncommon theme at a biennial. Some are academic, others enlightening, taken as a whole, inspiring. Though the organizers talked to over 500, the Biennial features 100 participants, the following a smattering of creative inventions, these found in the Chicago Cultural Center, 77 East Randolf Street.

[ rock print ] is the first architectural installation to be built from low-grade granular material and constructed by robotic machines. Conceived as an intriguing vertical object, the installation presents a radically new approach to The State of the Art of Architecture – the official title of the inaugural Chicago Architecture Biennial 2015 – and brings forward a new category of random packed, potentially fully reusable, poly-dispersed jammed structures that can be automatically fabricated in non-standard shapes. Following an initial period of robotic assembly, the installation will comprise a large-scale architectural artefact in its completed form, exhibiting distinct features, such as, for example, full material reversibility and the respective reusability of the aggregated materials; structurally active interlocking, differentiated structural performance, while yielding high geometric flexibility and articulation. Performing a full scale 3D “rock printing process” that uses the self-aggregating capacities of the material itself, this visionary project is the first collaborative installation by Gramazio Kohler Research, ETH Zurich, and the Self-Assembly Lab, MIT. [ credits ] images below> 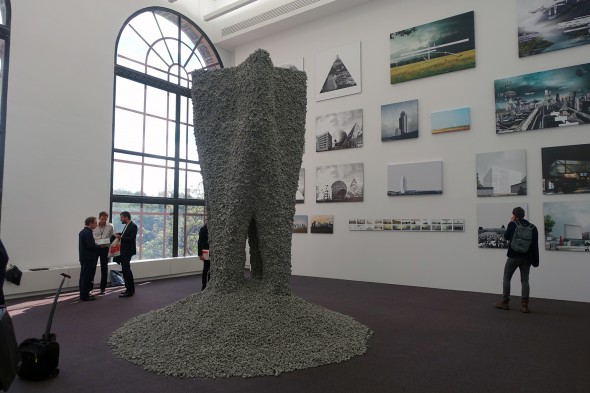 [ BUILTHEFIGHT ] Didier Faustino Paris / Lisbon – In the wake of the Occupy Wall Street and other similiar protests movements that followed all over the world, Didier Faustino proposes a modular architecture that is designed to strucutre protest sit-ins. BUILTHEFIGHT presents one assembled architecture composed of twelve modules. To be activated, the rough architecture requires a group of demonstrators who have gathered in the urban space. Each participant wears a devide that links to those worn b others, to form an occupied territory. Each ephemeral group establishes a compact unmovable space. The aesthetic of the project also refers, paradoxically, to the design of anit-riot police equipment and chain-link fences. This duality place the demonstrators in a double condition: offensive and defensive. This prototype proposes a political ‘archtiecture-event’ designed to enable defensive formations. images below> 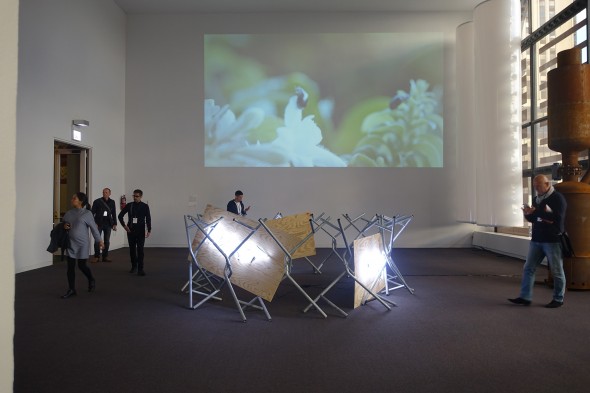 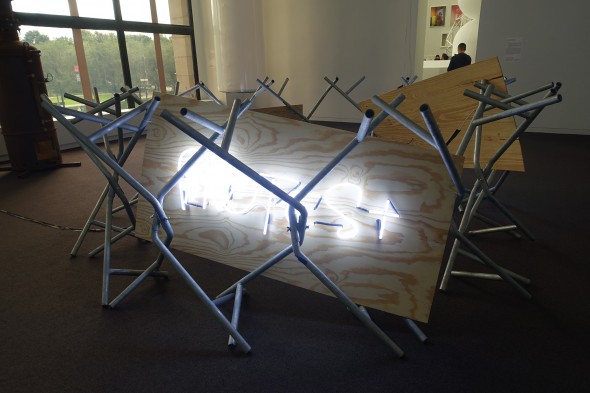 [ children’s town ] Onishhimak + Hyakudayuki architects | Tokyo – This is a smalll town for children. It is a gathering of several small houses, all of which are on wheels, so they can be moved. Children can parade with the houses or change their layouts to make a new town in which to play.

Children’s Town is base on the ‘Home-for-All’ project for children living in temporary housing in Higashi-Matsushima, Japan, that the architects build in 2013 in the wake of the tsunami that hit the country. image below> 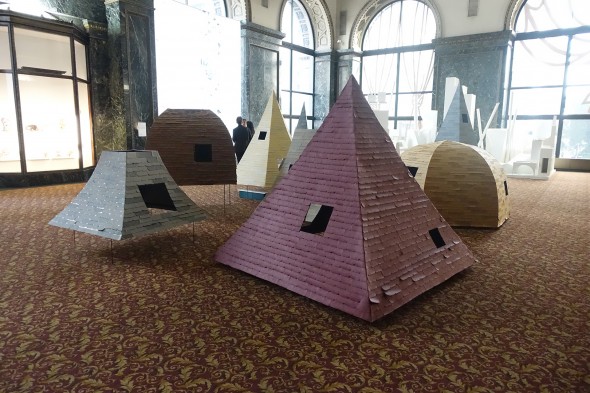 [ models of the house of one ] Kuehn Malvezzi + Armin Linke + Marko Lulić | Berlin – The center of Berlin will be the site for the House of One, a house of prayer and learning for Christians, Jews and Muslims alike, as well as the secular urban community. Kuehn Malvezzi designed a synagogue, a church and a mosque to be built under one and the same roof. The architecture of the House of One is monumental and devoid of symbolism, and presents itself to the city as a single entity. The spatial experience of the interior, however contrasts with this perception; inside, the three religions assert their harmony and difference. The three (3) models shown are the Model of Space (architecture), the Model of Gestures (photos) and the Model of Relations (video). 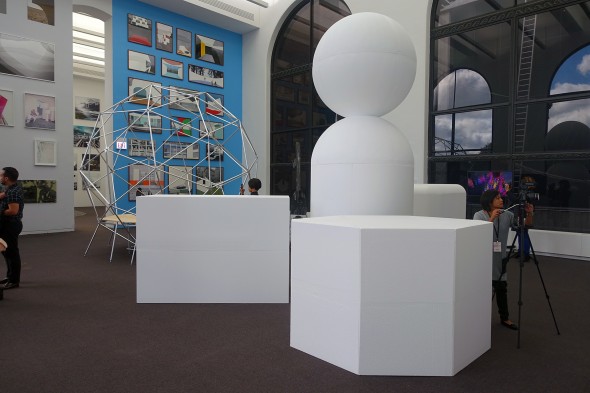 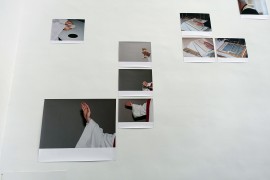 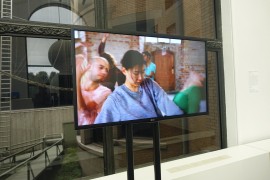 [ peranesi circus ] Atelier Bow-Wow | Tokyo – The courtyard of the Chicago Cultural Center is inaccesible, even though it is visiible from all sides of the building. This relationship of secludedness enhances the perception of the courtyard as a void in the middle of the building. the proposition of bringing people into the courtyard presents several difficulties – not environmental or physical concerns but rather issues with the security, safety and facility management. The allegory behind G.B. Piranesi’s Carceri d”Invenzione (Imaginary Prisons) could be recalled for this void space as a means to critique the constraints of daily life. The ramp, ladder, suspended bridge, cantilevered balcony and swing are not accessible to the general public but are rather for the use of circus performers – or for imaginary prisoners. 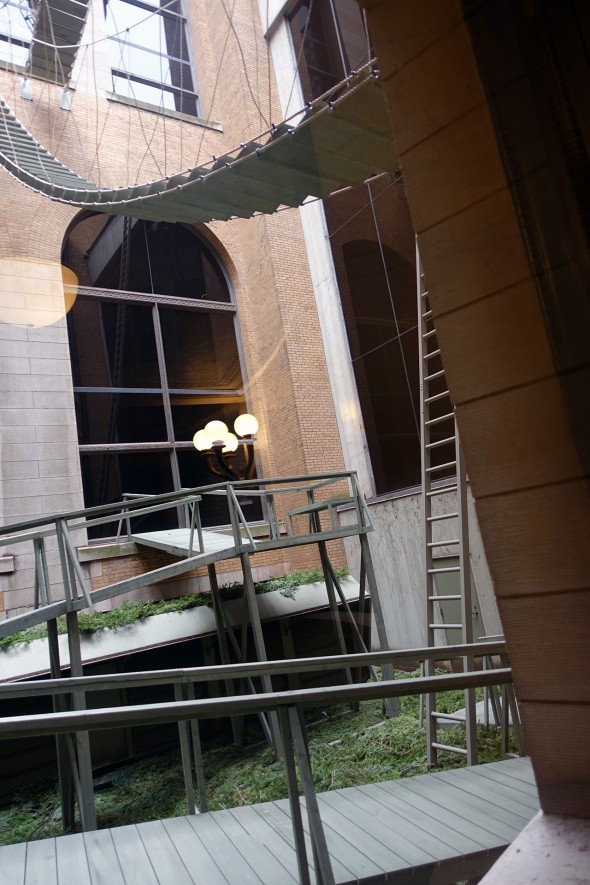 [ halo ] Wolff Architects | Cape Town – “Design something the world will never forget. Something that will be associated with Cape Town forever after. Something temporary.’ That was the brief that Wolff Architects received for a structure to celebrate Cape Town as the World Design Capital in 2014. The response was a halo of light, 330 feet (100m) in diameter, that would appear at night above Lion’s Head, a mountain that towers over the city. It is an enigmatic device, celebrating the landscape that defines Cape Town. It is also a gentle satire on the reverence that people have for Table Mountain. 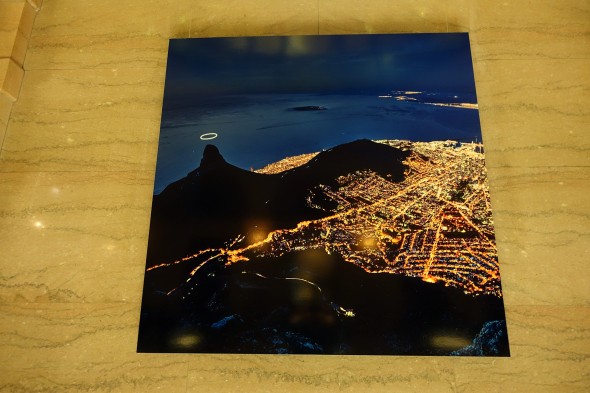