Though billed as the ‘second edition’ of This is not a Love Song, it’s really the third sighting. This is however the second sighting and newest in Bedford Square. Designed by artist and architect Didier Faustino, upon invitation from the AA – Architectural Association in London, the sculpture serves as a beacon for Faustino’s presentation Undomesticated Places, an exhibition presented as two projects, one inside the AA gallery and one in the public space of Bedford Square. The two approaches underscore performative practice in the closely-linked fields of contemporary art and architecture, representative of Didier Faustino’s obsession with the location of the body in private and public space.

The first part of the exhibition, inside the building, contains the video Exploring Dead Buildings 2.0 which recalls the performance realized on the occasion of the 12th Havana Biennial in 2015. An explorer with a video device fixed on his metallic armor constructs a sensitive archaeology of the School of Ballet; a building designed by Vittorio Garatti in the early 1960s.

Outside, in Bedford Square, This is not a Love Song (the first opus of the installation paid a pop tribute to André Bloc’s interior sculptures, created in Meudon, France in 2014) has been built. This monochromatic performance-architecture platform invites events and performances, as well as providing a “speakers’ corner” for public use. 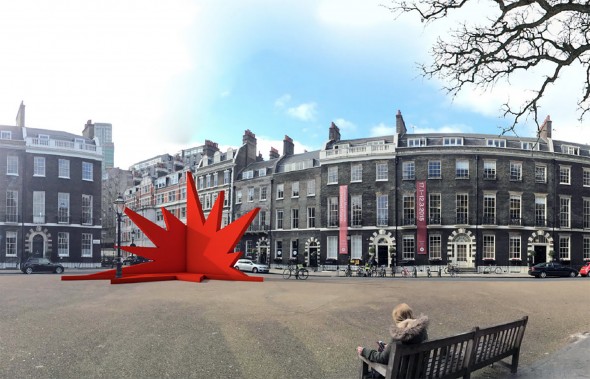 above> the second sighting, though the first in bedford square introduced in september 2015 / below> the inaugural sighting in meudon, 2014. 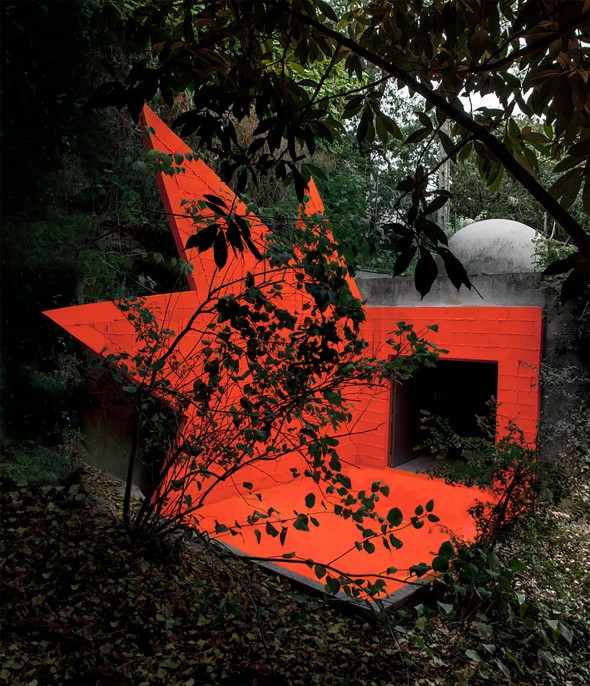 Just wondering if the missing architectural statement in the first should have somehow been retained in the second and third?

[ didier faustino ] was born in 1968 and lives and works between Paris and Lisbon.

Didier Faustino’s work reciprocally summons up art from architecture and architecture from art, indistinctly using genres in a way that summarizes an ethical and political attitude about the conditions for constructing a place in the socio-cultural fabric of the city. Spaces, buildings and objects show themselves to be platforms for the intersection of the individual body and the collective body in their use. Each project represents a concept that subverts the social context; in which seeing is experimenting beyond submission to the dichotomy of the rules that normally mark out public space and private space. The body is recentred on the basis of the social implications of the space, alerting people to the dangers of subjecting it to an ambiguity of representation that may contribute towards their forgetting its identity.

The [ architectural association school of architecture ] (AA) is the world’s oldest and most influential architecture school. Since 1847 the AA has pioneered architectural education alongside promoting and advancing the profession and the culture of the discipline; at the AA architecture is treated as a unique form of human enquiry. The AA’s students and teachers have gone on to become worldwide leaders of architecture. Through its unique unit-based system of teaching and its intensively collaborative team-based approach to learning, the school brings together disconnected worlds, fresh ideas and inspiring insights.

Alumni include Zaha Hadid, Rem Koolhaas, Richard Rogers, Will Alsop, Cedric Price and many others.