illinois is one of many states taking control of keeping their citizens safe. constantly in national news, pritzker and lightfoot have turned out to be outspoken leaders in person and on twitter. president donald trump takes heed, as he does with new york governor andrew cuomo and califormia governor gavin newsom. along with lightfoot, another strong mayor is san francisco’s london breed. 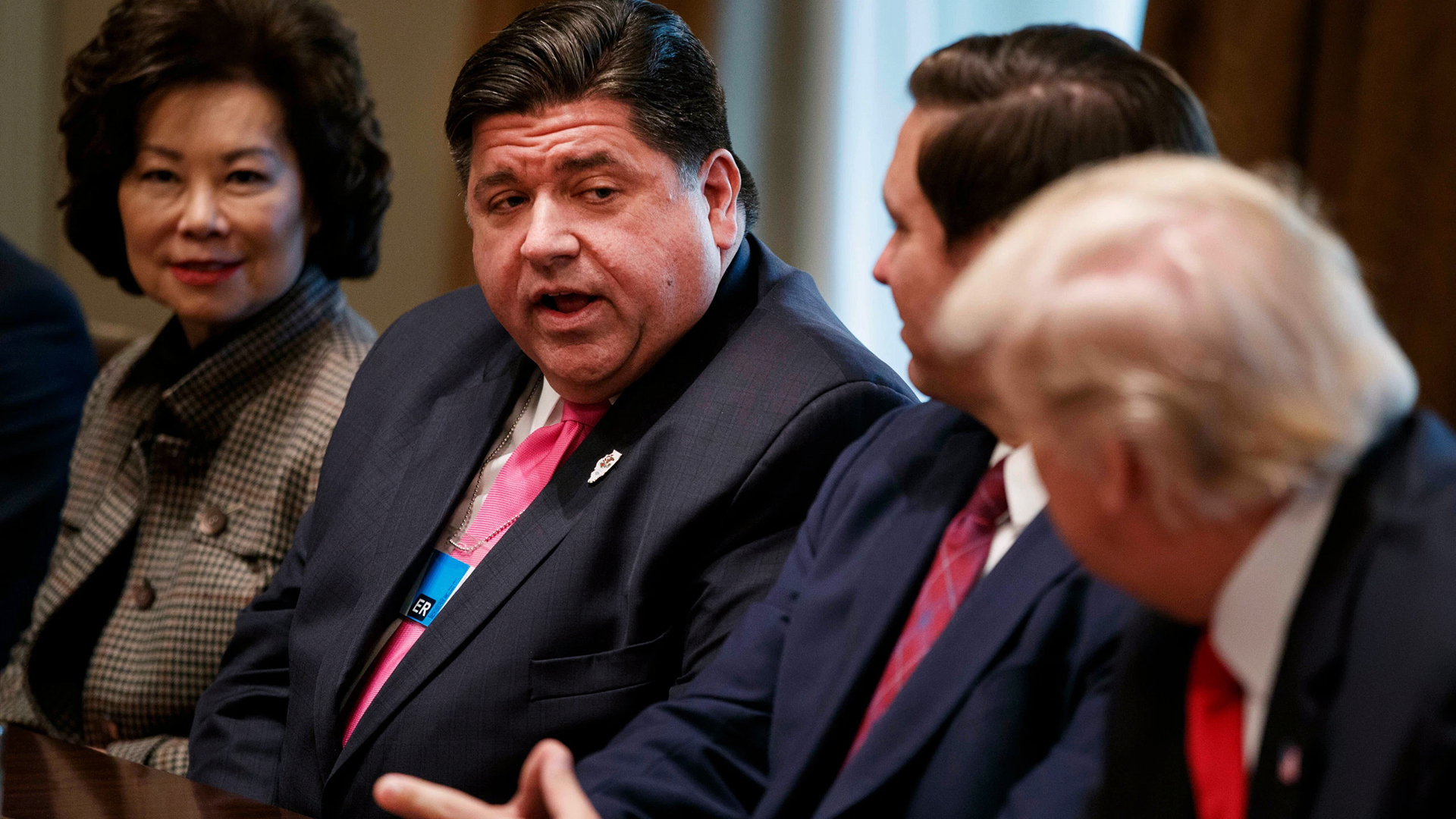 above > 13 december 2018 / governor-elect j.b. pritzker, center, talks with president donald trump during a meeting with newly elected governors in the cabinet room of the white house. gubernatorial fashion in illinois gets a lot of attention. during his first six weeks in office, pritzker’s appointment calendar includes 70 “attire” recommendations for events as varied as bill signings, a state police officer’s funeral, a white house dinner, surveying flood damage, and cocktails with legislators at the illinois governor’s mansion / ap photo/evan vucci

president donald trump has the biggest megaphone, but it’s governors and local officials who will decide when to begin reopening their economies after shuttering them to try to slow the spread of the coronavirus. the constitution largely gives states the authority to regulate their own affairs.

trump has set easter, 12 april, as a goal for reopening the u.s. economy, though he also has said he will be guided by his public health experts. unless americans continue to dramatically limit social interaction by staying home from work and isolating themselves, the number of infections will overwhelm the health care system, many health experts have warned.

some questions and answers about the legal authority for shutting and reopening the u.s. economy.

q > does the president have the authority to override state and local orders?

a > no. under our constitutional system, states have the power and responsibility for maintaining public order and safety. as we’ve seen since the outbreak began, decisions about limiting social interactions by ordering people to shelter in place, closing businesses and shutting schools are being made by governors and local officials. those same officials will make the call about when to ease up, no matter the vehemence of trump’s exhortation to have businesses “opened up and just raring to go by easter.” trump’s comments “are just advisory,” said john malcolm of the heritage foundation.

maryland governor larry hogan, has ordered all nonessential businesses and schools to close, and he said thursday on twitter that he does not see a quick end to the restrictions. “this battle is going to be much harder, take much longer, and be much worse than almost anyone comprehends. we have never faced anything like this ever before, and i continue to urge the people of our state to stay in place at home and stay safe,” hogan wrote.

q > but the president has set a 15-day period in which all americans are being urged to drastically scale back their public activities. doesn’t that amount to a national order?

a > no. the guidelines are voluntary, and they underscore the limits on trump’s powers. he can use daily briefings and his twitter account to try to shape public opinion, and he has not been reluctant to do so. “when donald trump selects a narrative and begins to advance it, especially through his twitter account, it has a remarkable effect on those who trust him. the more the president speaks against more robust forms of social distancing (such as shelter-in-place rules), the more noncompliance we are likely to see on the ground level from citizens sympathetic to the president,” robert chesney, a university of texas law professor wrote on the lawfare blog.

q > still, trump has invoked some federal laws to address the virus outbreak, hasn’t he?

a > yes, he has. the stafford act allows the expenditure of tens of billions of dollars in emergency assistance. the defense production act allows the president to direct private companies to produce goods or acquire raw materials. trump has yet to actually order companies to do anything, over the objection of some local officials who have a desperate need for ventilators, masks and other equipment. but trump can only assert powers that congress has specifically given him. “there are real limits on the president and the federal government when it comes to domestic affairs,” berkeley law professor john yoo said on a recent federalist society conference call. at the same time, the federal government has the power, under laws aimed at preventing the spread of communicable diseases, to quarantine people when they arrive in the united states and travel between states.

q > is it clear that state and local governments have authority to impose the severe restrictions we’ve seen?

a > lawsuits already are challenging state actions on religious grounds and as seizures of property for which the government must pay compensation. but for more than 100 years, the supreme court has upheld states’ robust use of their authority, even when it restricts people’s freedoms. in 1905, the court rejected a massachusetts pastor’s complaint that he should not be forced to get a smallpox vaccine or pay a fine, malcolm noted.

on 19 march the clearwater council votes to delay closing the clearwater beaches until tuesday 24 march. BUT, they had a change of heart and closed them yesterday, 21 march.

florida, the last u.s. state finally gets the message. amid national criticism as early as 15 march, on friday 20 march, governor ron desantis closes beaches, restaurant dining rooms and bars in the state, as well as concert houses and other entertainment venues in broward and palm beach counties which includes fort lauderdale.

that same day, the city of miami beach and miami-dade county took even larger emergency measures by closing all commercial lodging establishments. this means hotels, suite hotels, hotel units within apartment-hotels, hostels, dormitories, motels, and temporary vacation/short term rentals are ordered to shut down operations and tell guests they must leave. the order goes into effect at 11:59 p.m. on monday, march 23. and a curfew throughout the city from midnight to 5 a.m., goes into effect tuesday, 24 march at midnight. “our hotels have always been the lifeblood of our economy, so shuttering them is not something to do impulsively. but right now, as painful as it may be, the reality is we just cannot be a tourist destination,” said miami beach mayor dan gelber in a statement.

the second to last u.s. state was texas, where on 19 march, governor greg abbott signed an executive order limiting crowd gathering to 10, and to avoid eating or drinking at bars, restaurants, and food courts, or visiting gyms or massage parlors; provided, however, that the use of drive-thru, pickup, or delivery options is allowed and highly encouraged

we certainly can point fingers at the clueless and selfish during spring break as well as st. patrick’s day. but the real problem here is lack of leadership. we applaud the pro-active governors including new york’s andrew cuomo, illinois’s j.b. pritzker, and california’s gavin newsom and city mayors including chicago’s lori lightfoot, and miami-dade’s carlos a. gimenez.

so you ask why is this note such a nastygram? a simple answer is let’s compare governors. when illinois governor j.b. pritzker saw how chicago o’hare was handling international travelers, keeping them bunched up in a line for six hours, he went a little nuts and said that’s exactly what we don’t want to do. we need a social spacing mentality. the result, the airlines kept the passengers in the plane until it was ok to go through immigrations.

new york governor, andrew cuomo, is on cnn every morning soothing worries like mr. rogers. nothing political but common sense examples and suggestions on how to behave, protect seniors and kids, how to be responsible. it definitely impressed the president who we see every day but not sure he’s so soothing.

the spring break crowd. an annual rite of passage. there was no one in florida to protect them. the man at the top failed them. so yes, nastygram seems, just right.