serendipity: the faculty or phenomenon of finding valuable or agreeable things not sought for…
this article intends to provoke an ongoing conversation re chicago’s design history. let’s begin with a philosophy of “one must look back to move forward” and with elements necessary to this narrative — in chronological order… bauhaus movement, lászló moholy-nagy, new bauhaus in chicago, the chicago design archive, and chicago designer steve liska. an aside, this year, iit institute of design is celebrating the 80th anniversary of its founding as the new bauhaus.

[ bauhaus movement /// weimar/dessau germany ] the historical bauhaus is the most influential educational establishment in the fields of architecture, art and design. founded 1919 in weimar germany by architect walter gropius as a school that combined crafts and the fine arts, it was famous for an approach to design which it publicized and taught. the school closed in 1933 when the nazis came to power in germany.

[ lászló moholy-nagy, a new bauhaus school /// chicago usa ] also known as moholy – a hungarian experimental artist, modernist, and former faculty at the parent bauhaus in dessau comes to chicago. in 1937, at the invitation of walter paepcke, the chairman of the container corporation of america, moholy-nagy, moved to chicago to become the director of the new bauhaus. the philosophy of the school was basically unchanged from that of the original. 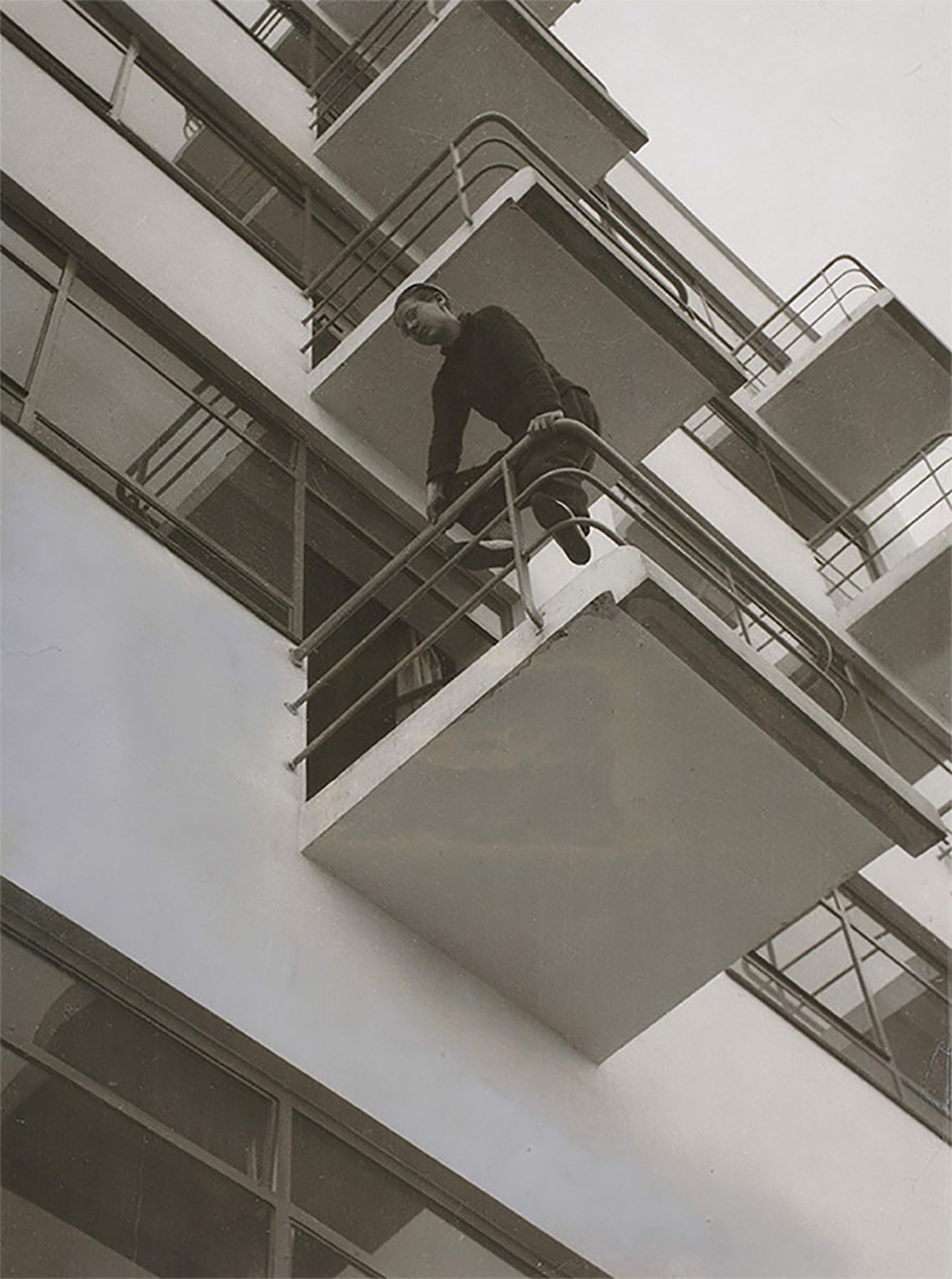 [designapplause] for the past 30 years you have managed to create wonderful office spaces for yourself. your current space may be your best. how did you arrive at this location?

[steve liska] our lease was up, was grumbling about it to a client that just developed the 600 north fairbanks helmut jahn building. he said he had a tenant (the pritzker military library) moving out of his building and i should take a look. it was slightly scary.

[SL] as brand designers- communication is critical. so have always appreciated an open, flexible, collaborative office. our office supports us and gives us a neutral environment to share ideas. and has good coffee.

[DA] what was involved / how did you arrive at the finished presentation of your space?

[SL] the building is almost 100 years old, very solid and concrete loft-like. my friends at gary lee partners helped us plan for all the previous tenant demo- we removed walls, office and lots of strange old equipment. then they helped configure the space, basically made it happen.

[DA] tell us about some back stories to this building.

[SL] it was built almost a 100 years ago as a bakery (the horn and hardart automat company). it has been a us post office, housed hugh hefner’s first playboy office, the chez paree nightclub in the 50s, home to joe sedelmaier, shel silverstein, dingbat’s disco (mr. t!) and of course the school of design. lots of history, stories and a few cool ghosts.

[SL] it took a while to learn about the school and moholy-nagy from our new landlord, but once we did- we were fanatics. he actually taught in what is now our space. we have a great old photo of a sculpture class in our office from the late 40s. i have always been a fan of everyone from the bauhaus, but the more i researched moholy-nagy – the more obsessed i became. such a renaissance man.

[DA] tell us about the facade presentation.

[SL] many years ago the building’s owners hired an artist to decorate the front of the building with a huge mural of moses. not sure why moses, but it was quirky and interesting. the building was undergoing surface repair- so moses was going to be painted over. we talked to our landlord about replacing it with something related to moholy-nagy and the school of design. we eventually found a little 2 1/4 inch square photo at moma that we thought was a good evolution from moses. our landlord agreed- they ended up hiring the same artist to paint the mural based on that photo. a year later- the traveling moholy-nagy show was announced.

the best part is watching all the tourists who take photos from across the street. they don’t exactly know what the mural is all about- and that is good.

[DA] is this your final location in a perfect world?

[SL] no that would be costa rica or paris. but for now- this is pretty good.

[DA] as long as we have you, what kind of things are you working on?

[SL] a lot of real estate work, some educational institution branding, and ongoing work for a lot of existing clients. (liska.com)

[DA] i’ve been to your offices many times and we have run into each other pitching work. i don’t recall you wearing anything but a white shirt and tie. and now that you’ve aged a bit you remind me of the design community in the late 60s early 70s. very serious looking. thoughts?

[SL] i’m glad you think i am serious looking. like most things in fashion- it comes back over and over again. i count on that. i do own 2 blue shirts. seriously.

[DA] want to say something we haven’t talked about?

[SL] no, done for now. have to go pick out tomorrow’s tie. 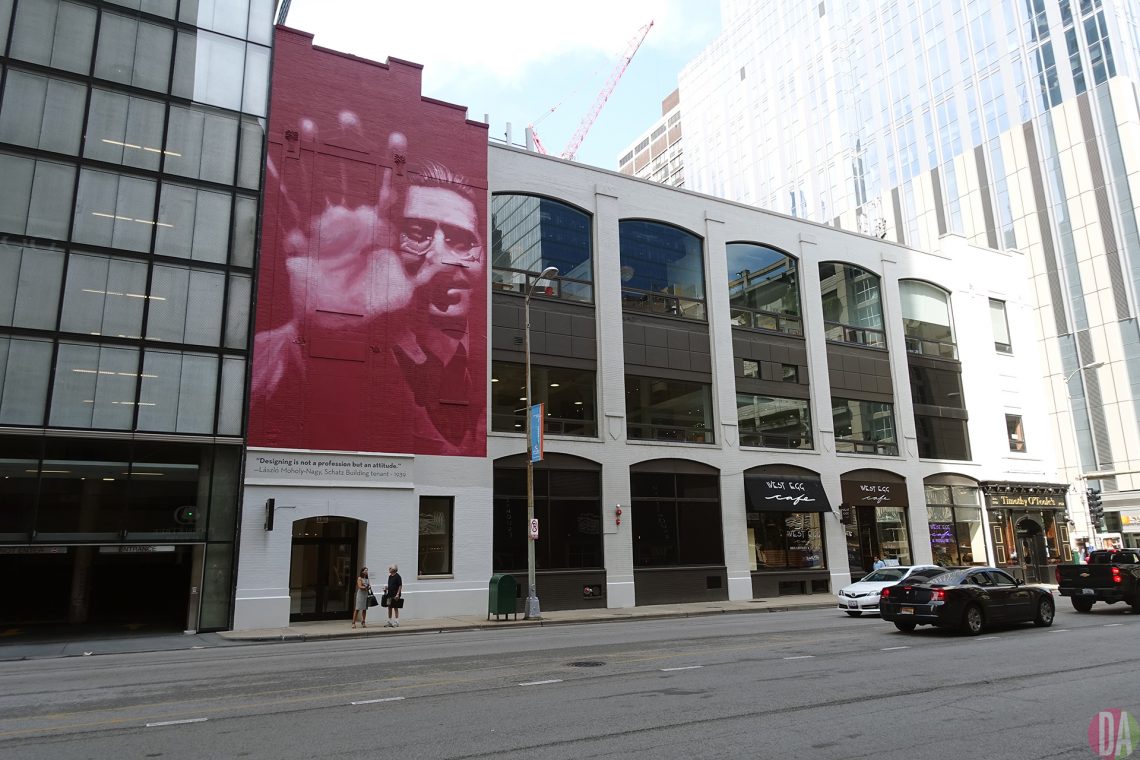 the chicago design archive (2002-present), is a permanent and exclusive online record of chicago-related experiential, graphic and product design. the mission statement is simple – to share the best of chicago design. originally hosting only graphic design, experiential and product design work is now being collected. the cda founding board recently added a graphic design advisory and a curatorial board. it goes without saying that this dedicated team feels the burden of preserving and growing the cda, afterall, it’s only chicago’s design heritage. we asked advisor, steve liska, if we could meet at his office. entering his office building we all notice the plaque below. we didn’t know… 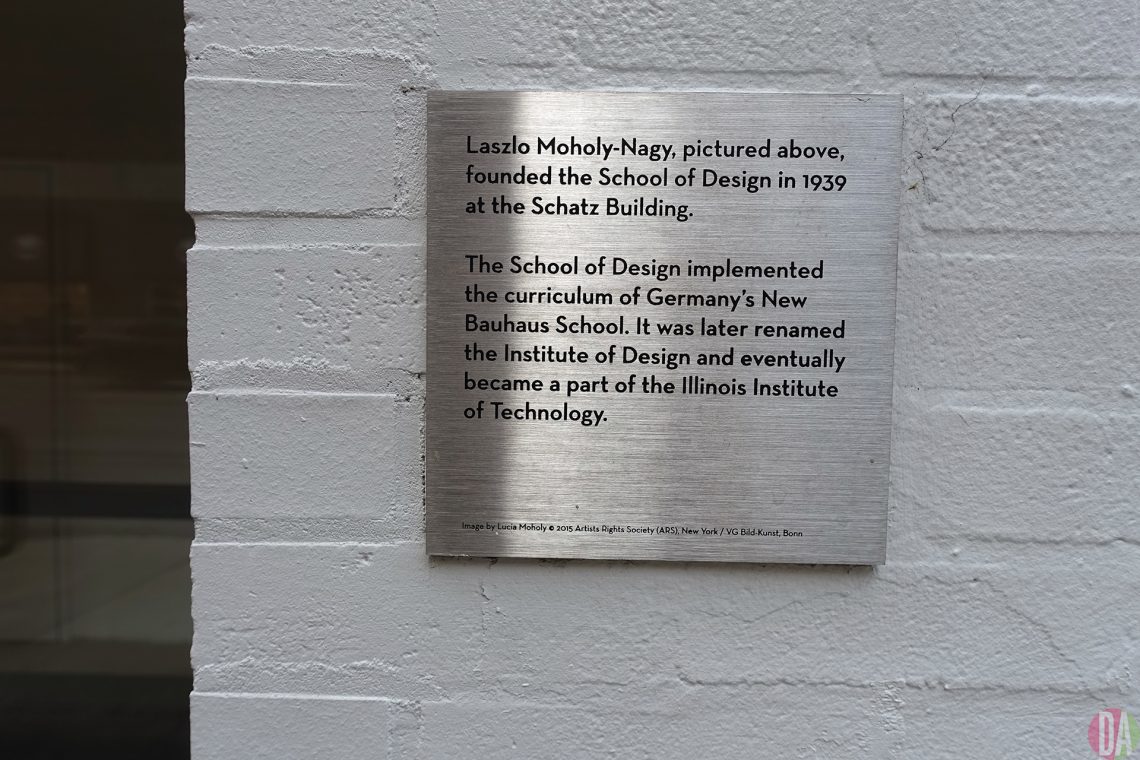 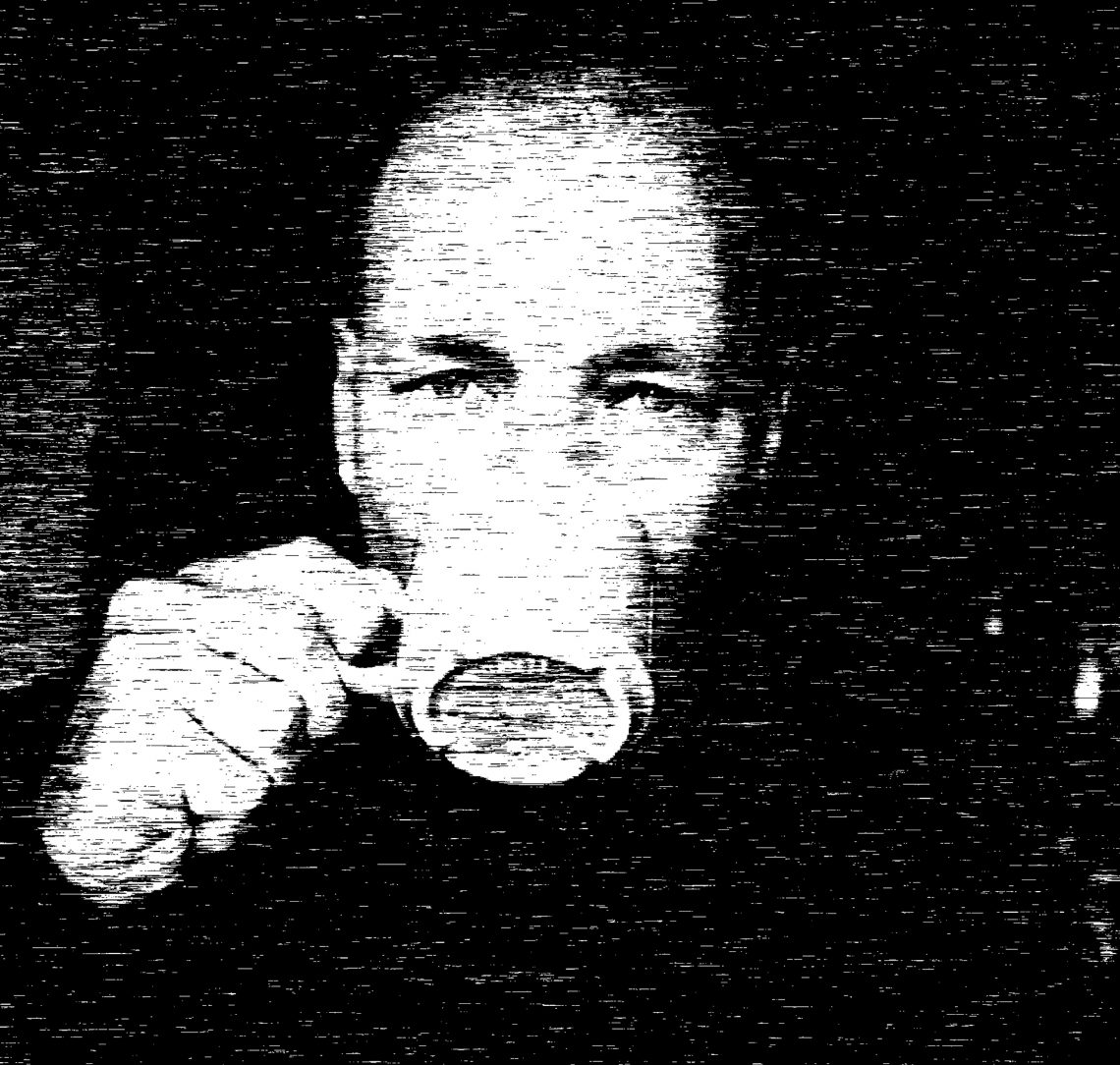 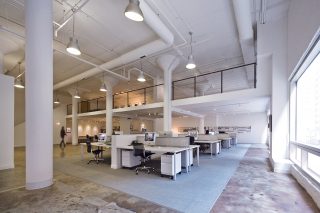 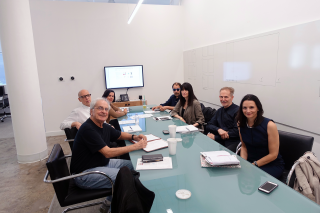 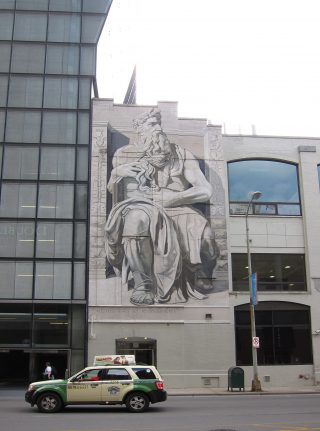 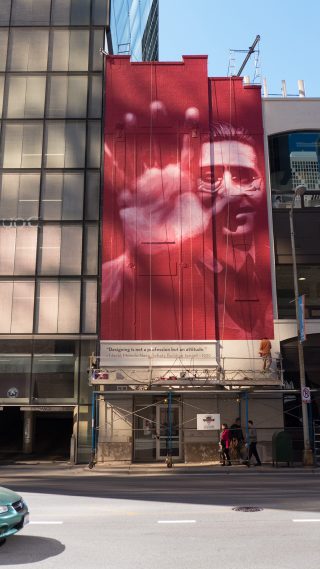 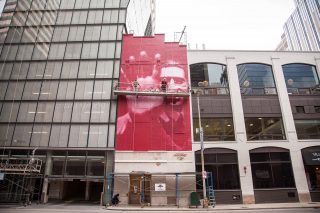 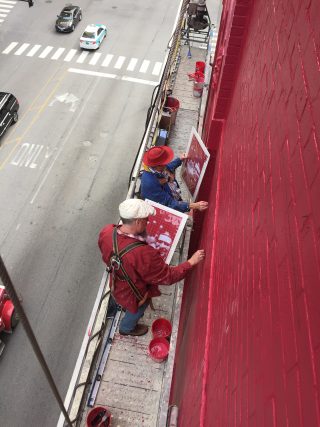 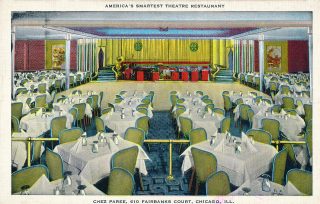 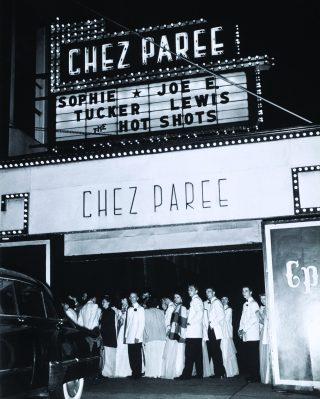 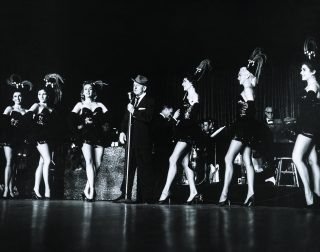 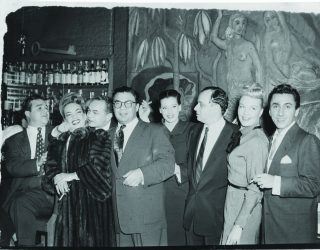 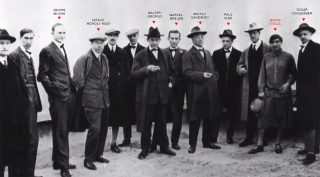 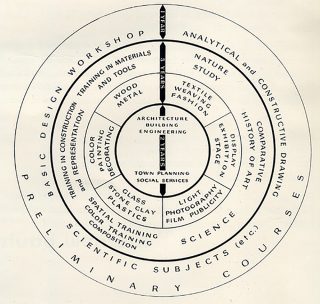 below> video trailer of ‘moholy-nagy: future present’ produced by and exhibited in chicago in 2016. other usa venues included the guggenheim, and most recently lacma