Chicago architect Jeanne Gang is in the headlines again, one week after being selected in Fast Company 2011 Masters of Design issue. The MacArthur Foundation today announced her a MacArthur Fellow and the recipient of the 2011 Genius Grant.

Jeanne Gang is an architect challenging the aesthetic and technical possibilities of the art form in a wide range of structures. Always responsive to the specific geography, social and environmental context, and purpose of each project, Gang creates bold yet functional forms for residential, educational, and commercial buildings. Her most highly acclaimed building, Aqua (2010), is an 82-story, mixed-use skyscraper in Chicago. The undulating contours of Aqua’s balconies infuse the familiar high-rise profile with an unusual optical poetry; at the same time, energy-efficient features such as heat-resistant and fritted glass, rainwater collection systems, and energy-saving lighting systems address environmental concerns on a large scale. Gang’s mastery of the balance between novelty and urban practicality is also evident in the Media Production Center (2010) for Columbia College of Chicago, an imaginative fusion of found material, engineering, and structural economy that reflects the avant-garde nature of the school’s work in film, television, and interactive media. 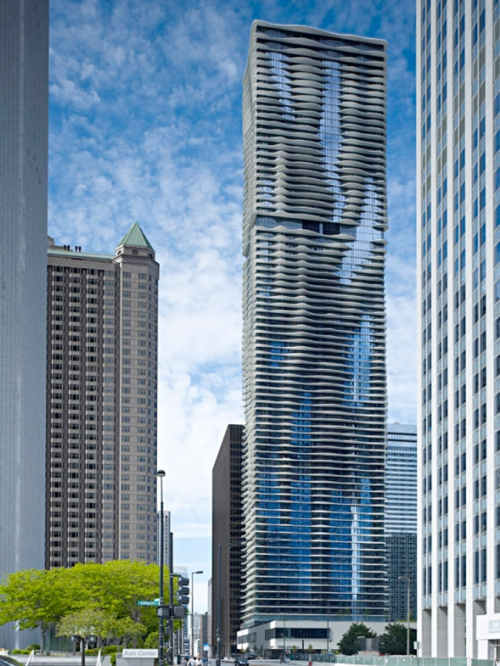 Jeanne is among 22 fellows honored, each will receive $500,000 over the next five years. The money she says, “can underwrite research that’s not funded by clients and the MacArthur imprimatur holds personal meaning.” [ macarthur foundation ] [ studio gang architects ] [ 2011 masters of design ]