happy monday. hertz purchases 100,000 teslas and what it means for many.

Home newshappy monday. hertz purchases 100,000 teslas and what it means for many.

happy monday. hertz purchases 100,000 teslas and what it means for many.

last monday hertz made a mega announcement that they’re purchasing 100,000 teslas. in response the wall street journal‘s editorial board opines below what this means.

the more you look behind corporate and government press releases these days, the more you learn about their mutual benefit society. we wrote tuesday about the many subsidies for tesla’s electric cars, but it turns out there’s also a pot of subsidy gold behind the hertz decision to buy 100,000 teslas for its car-rental fleet.

tesla ceo elon musk says he isn’t giving hertz a discount on the reported $4.2 billion order. but he doesn’t need to because the house reconciliation spending bill includes a 30% tax credit for “qualified commercial electric vehicles.”

the text doesn’t clearly define what is a “qualified commercial electric” vehicle, but our sources say hertz’s teslas would likely make the cut. the credit could save hertz $1.26 billion and make a tesla almost as cheap for hertz to buy as a toyota camry.

hertz plans to install thousands of electric-vehicle chargers, which could also be eligible for taxpayers subsidies. the house spending bill extends a 30% tax credit for the installation of ev charging stations through 2031, which is on top of the $7.5 billion appropriation for stations in the separate senate infrastructure bill.

hertz’s interim ceo mark fields is casting the company’s tesla order as a strategic business decision and evidence that evs are going mainstream. maybe, and there’s no doubt that the tesla order is winning progressive accolades for the rental-car company. electric vehicles are also less expensive to maintain than gas-powered cars, so they could reduce hertz’s operating costs.

but if evs make business sense, why must the government subsidize them? democrats complain that corporations aren’t paying their fair share in taxes, but then they give them generous tax breaks for promoting progressive policies that reduce their tax payments.

enjoy that hertz tesla ride. you’ll have paid more for it than the rental contract says.

well ok, politics aside, there’s no such thing as a free lunch. it’s still a very green deal. a simple rental agreement equates to your ev training wheels which will lead to an ev purchase for many and more much needed charging stations. it’s one giant step in the right direction.

the ultimate status is to have no status. 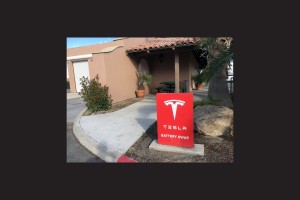 three hours southeast of san francisco close to being finished.

a $4.1 billion decline in value exceeds a $4 billion market valuation at the start of 2013.