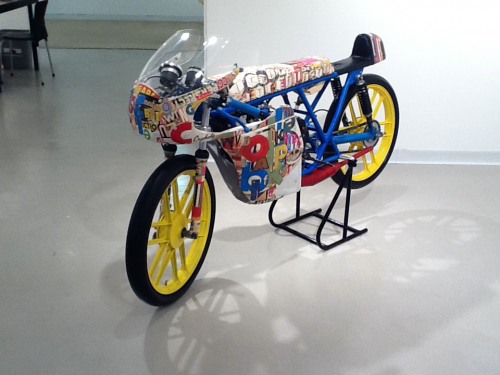 a peek at objects as art. 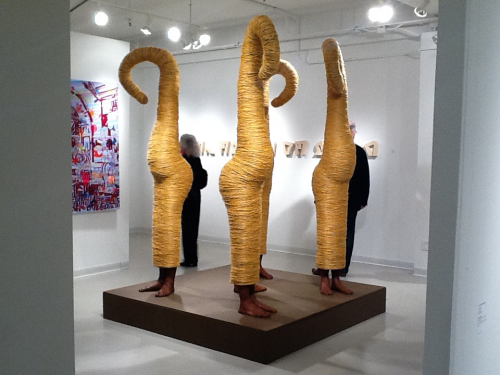 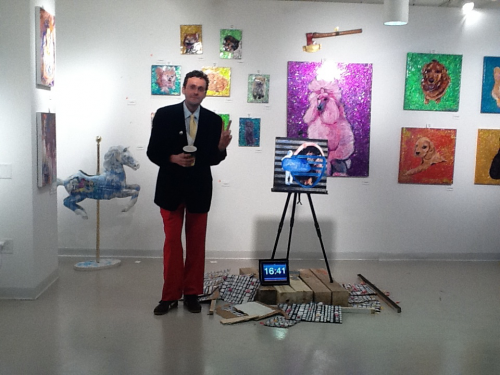 above: artist michael reynolds will grab the gold axe on the wall and destroy the art on the easel in 16 minutes 41 seconds — if no one buys the art 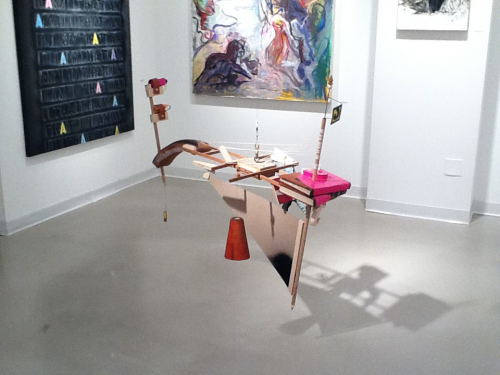 above: this mobile is powered by battery driven propellers that spins it around. fast.
juan angel chavez / underdog / (2011) / linda warren gallery

It was the 30th anniversary of Chicago’s first international art fair, dubbed the Chicago International Art Exposition and staged on Navy Pier in May 1980. In the three decades since, the fair changed hands (and names) a half-dozen times, ultimately landing in the lap of corporate art fair giants Merchandise Mart Properties Inc., which saved the previously independent fair from certain bankruptcy in 2006 and has produced it at the Merchandise Mart ever since.

Thirty-one years, on the other hand, is different.

Five years into MMPI’s version of Art Chicago, locals have learned to associate the fair with the Artropolis moniker, coined by MMPI as an all-inclusive umbrella under which the traditional Art Chicago fest lives alongside the contemporary-driven NEXT exhibition of emerging art, now in its fourth year, and the International Antiques Fair, which MMPI has hosted since 1997. Together under the same massive roof, the trio of fairs coexist as a one-stop Midwestern shop for international collectors who may very well be shopping for art and furniture in the same way they pick out matching cabinetry and counters elsewhere in the building.

This year, the lines between MMPI’s fairs will blur even further: Art Chicago and NEXT share a floor in the Mart (they’ve previously been on separate floors), feasibly making it easier for collectors to roam from classic to contemporary. According to MMPI vice president Paul Morris, who is Art Chicago’s acting director, the combined floor plan came by request.

“We were encouraged by both collectors and dealers, making it easy for collectors as possible to navigate the fair,” Morris said last week, adding that visitors will be able to cross back and forth between established work and emerging work, as opposed to waiting in line for the Mart’s elevators.
NEXT curatorial director Ken Tyburski maintained that despite this year’s comingled floor plan, the number of exhibiting galleries will remain roughly the same as last year, and the “energy is going to be that much greater” with the two fairs combined.

“The decision [to combine floors] was made only a few months ago,” Tyburski said last week. “It really enabled me to look at the floor plan and see what’s been working and what hasn’t been working, what are the trouble areas.”

The streamlined exhibition space is the biggest logistical change this year. But the biggest deal, art-wise, is Shepard Fairey. The iconic graphic artist has been commissioned in partnership with Los Angeles–based Robert Berman Gallery to create an outdoor mural on the south side of the Mart and will spend some time behind the turntables on opening night. Otherwise, Art Chicago 2011 mostly mirrors its past few years at the Mart. The Museum of Contemporary Art once again hosts an opening night gala; lectures, panels and programming, primarily centered on topics essential to collecting, are scheduled “almost nonstop,” Tyburski said, throughout the five-day fair. Still, when one of those events is a cake and champagne “royal toast” to the nuptials of Prince William and Kate Middleton (“Hats encouraged,” whatever that means), one has to wonder: Is Art Chicago really still about the art?

That question has launched numerous fringe fairs over the original’s long history. The most recent is the MDW Fair (pronounced “Midway”), which took place over two days last weekend at Bridgeport’s Geolofts. Organized by a trio of local non-profit art sectors — Threewalls, Roots & Culture Contemporary Art Center and the Public Media Institute — the MDW Fair was established a few months ago to serve the grassroots arts community, which has slightly shallower pockets than most returning Art Chicago exhibitors.

Spearheaded by Edmar Marszewski, director and executive curator of the Public Media Institute which, in turn, has produced the alternative arts Version Fest for the past decade, MDW’s aim is less corporate, more community-driven.

“We like the fair; I think it’s great we have something like that,” Marszewski said of Art Chicago, at which he has a booth for his artists management company, Reuben Kincaid (if it sounds familiar, no doubt you’re old enough to remember “The Partridge Family”). “But one of the big issues is that some people are disappointed with how that fair operates, or the costs associated with being involved, so we developed this affordable option. Being non-profit organizations, our job is more about expanding peoples’ knowledge of the unique art ecology of this region. The (MDW) fair is a perfect platform to give people a sampling of the diverse art scene here.”

The MDW Fair was cross-promoted as part of Artropolis, Tyburski said. But at their core, the two events aim to serve very different audiences. When asked where Art Chicago is headed, MMPI’s Morris spoke plainly: Art Chicago caters to its customers, and those customers want to buy.

“Every art fair has two clients: dealers and collectors,” Morris said, “and you want to make it an incredibly positive experience for both of them.”