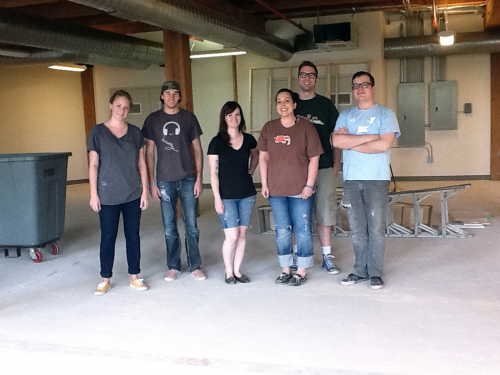 We are talking to Tanner and Amanda Woodford on the premises of the soon-to-be-ready-for-prime-time Chicago Design Museum. The museum (CHIDM) is of the pop-up variety and will pop-up in a week. Between now and then there is a lot of work to do. Let’s find out what’s happening.

[DesignApplause] Tanner, what’s your idea of a pop-up museum?
[Tanner Woodford] The whole idea is to host annual design exhibitions and events in a local, historically significant space. In addition, we’ll have events throughout the year that will support the broader initiative of the Design Museum.

[DA] Tanner and Amanda, tells us a little about yourselves and how this idea came up and your roles in it.
[Amanda Woodford] I became involved in the museum through Tanner; currently, I am the Director of Ignorance & Ambition, our official store. We’ve been married for five years and attended the Herberger School of Art & Design together at Arizona State University, where all of this started.
[TW] The concept started five years ago in Phoenix with a friend, Mark Dudlik. At the time we wanted to create a magazine, so we started interviewing designers such as Rick Valicenti, Milton Glazer, and Ivan Chermayeff. While we gathered quality content, the magazine unfortunately never came to fruition. Eventually, we started thinking about Phoenix Design Week – centered around a conference, the first of which was in 2008. It evolved into something very credible and is still going on today. During the whole process, we talked about the general lack of design museums the U.S. The pop-up model of a museum appealed to us, as it would bring a celebratory feeling to the process of design. The first pop-up Design Museum was in Phoenix, in October of 2011, during the AIGA Pivot Conference. Two months prior to this, Amanda and I moved to Chicago. Eventually we decided to open up a Chicago satellite, and so far the city seems very receptive to the concept.

[DA] Is the sole focus of the museum graphic design?
[TW] Currently we are 90% print driven. We are living in a flat world, but because the museum is in it’s first year, it makes sense to keep a tight focus and enables us to present comparable typologies.
[AW] Print) was a natural start for us and fairly easy to curate for our first run. Next year we (with our board/committees) may decide to go in a completely different direction. For now, graphic design works for us. 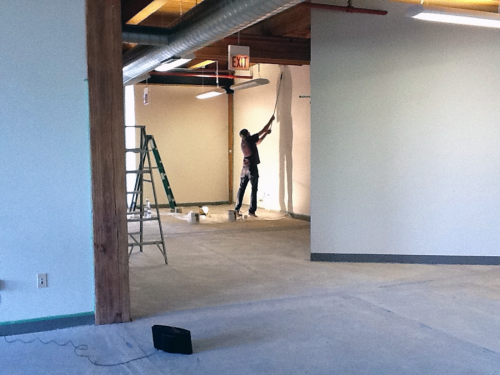 [DA] What’s your opinion of a museum vs a gallery installation?
[TA] We’ve been involved in big conversations of “what’s a gallery” vs “what’s a museum”. You can show current, popular pieces in both but the museum seems better suited for exhibiting items with historical significance, whether it be in the field of design or elsewhere.

[DA] What was interesting to me as I found out more about your museum and finding something interesting to present via the Chicago Design Archive was the extent of interest for looking at the historical work.
[TW] Exactly. There’s a need to provide easy access a wide range of creative history.

[DA] The Modern Wing at the Art Institute is finally mounting design. Thank you Zoe Ryan. And graphic design you certainly show the poster, the book. The Wing also shows motion pieces but I’m not sure if there is interactive pieces.
[TW] Last week I read, although I can’t remember the source, an article that said that interactivity will be pervasive in museums in the next two to five years. We (CHIDM) do have motion pieces, though they are confined to a small video viewing room. I would love to have more.

[DA] Let’s sum things up. This is the first Chicago Design Museum and when did you decide to have it here and why now? Was it to coincide with a somewhat new Chicago Design Week? I think this is the third consecutive year for Design Week. How did you orchestrate this event?
[TW] Amanda and I only started talking about this nine months ago.
[AW] We’ve been in Chicago a little less than two years. Our work on the Phoenix museum last October brought us to the idea that we’d like to bring it to Chicago.
[TW] It took a lot of time to actually commit to it. We really didn’t start working on it until January 2012. We started by building a small board together about five months ago. Initially, we asked five people to come to our one bedroom Logan Square apartment and started talking about what we might want to do. We made a list of exhibition ideas and started pouring into those.
[AW] When we started, we didn’t have a timeline in mind. But pretty quickly everything fell into place and here we are in June with the museum open. 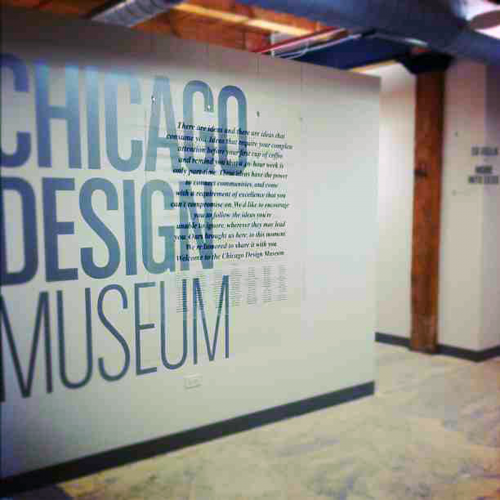 [DA] You’ve built a very clear and easy to navigate web site. How did we ever get by without a Web presence before? How tight is your business model, your goal, your mission statement? Do you have this plan in writing, a graphic standards guide?
[TW] It’s always changing. Some days we’re very structured, and others we flew by the seat of our pants. We didn’t start by asking people to come on board with a specific task for them in mind. We asked everyone how they would like to participate and then our titles and duties evolved. We responded to the needs of the museum; some have taken tasks on that they’ve never done before, but have become really good at.
[AW] Our board now numbers around nine. We first started by meeting every Tuesday and we now have full board meetings every other Tuesday, with separate committee meetings in the weeks between. For the month of May, we were almost always at the space getting things ready.

[DA] You perfectly describe the passion and commitment required to make this happen. And most if not all have full-time jobs. How are you funded?
[TW] We started with sponsors. We have different levels starting at $5 up to $5,000. All our levels are now covered. We’ve set funding goals and assigned our committees tasks that are aimed toward funding. Amanda runs the store. There is the funding committee. There are committees for marketing, space, events, and exhibits. We’ve been lucky to hit our goals very quickly. I can’t tell you the number of people who told me in this short period of time who would say “I’ve been thinking about this for 10 years.” Everyone is asking how they can help, many have contributed financially, and a few have actually joined the board. We’re also a not-for-profit organization and a subsidiary of Lost Creature (founded by Mark Dudlik) in Phoenix and some support comes through that company.

[DA] 10 years! I’ve bring up every once in a while over the past 30 years. Either talking about it amongst designers or going to the museum’s directly. Though architecture has been well represented. The museum’s were afraid to touch it. They were afraid of putting images of their collection on the Internet for fear that someone would download it. Seems almost funny now to talk about those days.
[TW] The museum concept, a small one such as ours, is less fearful and more adventuresome. We don’t feel we have much to lose as long as we provide a quality presentation. We can bring in the superstars if we’re lucky, as well as introducing talent that is unknown.
[AW] And we have the store we showcases local talent.
[TW] Four of our exhibitions in this year’s show are renowned in their fields. 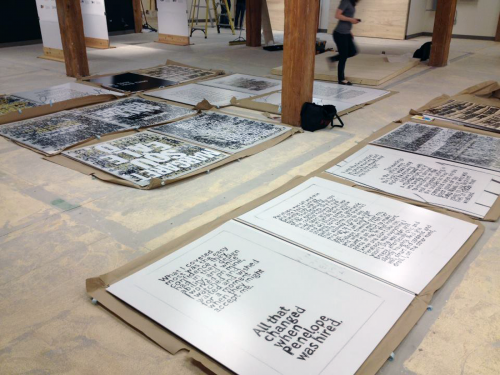 [DA] You set your sight on Design Week based on last year’s success. How did you integrate your new effort with theirs?
[TW] We first went to AIGA and then to STA. That’s pretty much it as far as organizations. We also talked to sponsors who supported Design Week.

[DA] How long will you be up?
[TW] For the entire month of June. We have a reception on 11 June and there are other events planned during the month. Debbie Millman will give a talk on 13 June and on 20 June Adobe will be giving a Creative Suite 6 workshop. We also have open hours from noon to 8p on Fridays and Saturdays.

[DA] What can we expect at the reception. I just returned from Design Week in Milan and their Temporary Museum had lectures, presentations, bands, it was huge, noisy, and inspiring.
[TW] No lectures at the reception, but there will be music, beer and wine, a photo booth, and of course the exhibitions and video room. It will be largely celebratory. We hope to see around 500 people come through that evening.

[DA] It all sounds it will be fun and inspiring. How do you get here if you don’t have a car?
[AW] There’s a bus on both Chicago and Sacramento. There’s the green line a short taxi ride away. We are also talking to the taxi companies about putting up a taxi stand.

[DA] How did you find this space. It’s a bit out of the way if you are thinking downtown, but it’s very nice space with parking.
[TW] Finding the space was the most difficult part of making this happen. David Szef, our Chief Facilities Officer, must have contacted 40 realtors. Then he had to go out of town so I took over and contacted another 80. It’s difficult to lock down a space for just a month. We had a couple of great spaces that were rented right from under us. It seemed if we could get a commitment two months before our event, we had a chance. Catherine Caravette was a huge help in us finding and utilizing this space.

[DA] You should talk to Sam Vinz and Claire Warner of Volume Gallery. They have to go through this all the time.
[TW] I was thinking about that very thing.

[DA] What’s next?
[TW] We are planning to have events throughout the year and have this event again next year.
[AW] I&A will be online after this event. We may also add items from the PHXDM.
[TW] We are thinking that the store doesn’t even have to be tied to our events, but can be popped at any creative event, an art fair for example.

[DA] Ok, see you for sure at the reception if not sooner. This great and thank you.
[TW] It goes without saying we are really excited too! Thank you. 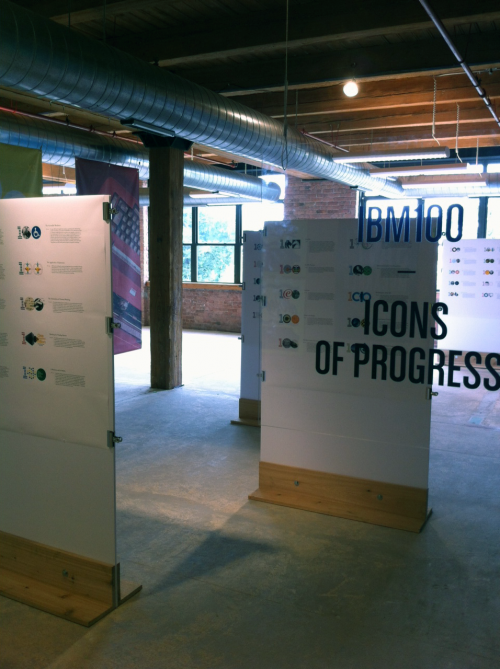