depending where you live, by mid-august 2020, if you were getting comfortable dining out, that is dining out outdoors, you were beginning to think what are you going to do come winter? chicago has already thought about it and decides to ask the public for ideas via a city of chicago winter restaurant challenge.

chicago’s mayor, lori lightfoot tweets “chicago winters have a reputation. we’re asking chicagoans to share their ideas for innovative winter outdoor dining solutions that adhere to covid-19 protocols so we can support our favorite local restaurants while keeping chicagoans healthy.”

Chicago winters have a reputation. We're asking Chicagoans to share their ideas for innovative winter outdoor dining solutions that adhere to COVID-19 protocols so we can support our favorite local restaurants while keeping Chicagoans healthy. https://t.co/9F1h4kfHmC

the press release invites the city of chicago residents who want to participate in the contest can submit their suggestions online.

submissions criteria include: concept ideas and fesability, a solution overview, user research that take into account the many stakeholders involved – from customers to restaurant workers to construction trade workers, the technical descriptions and prototypes.

entries deadline will be accepted through 11:30 pm on labor day, monday, 7 september, via ideo’s innovation platform 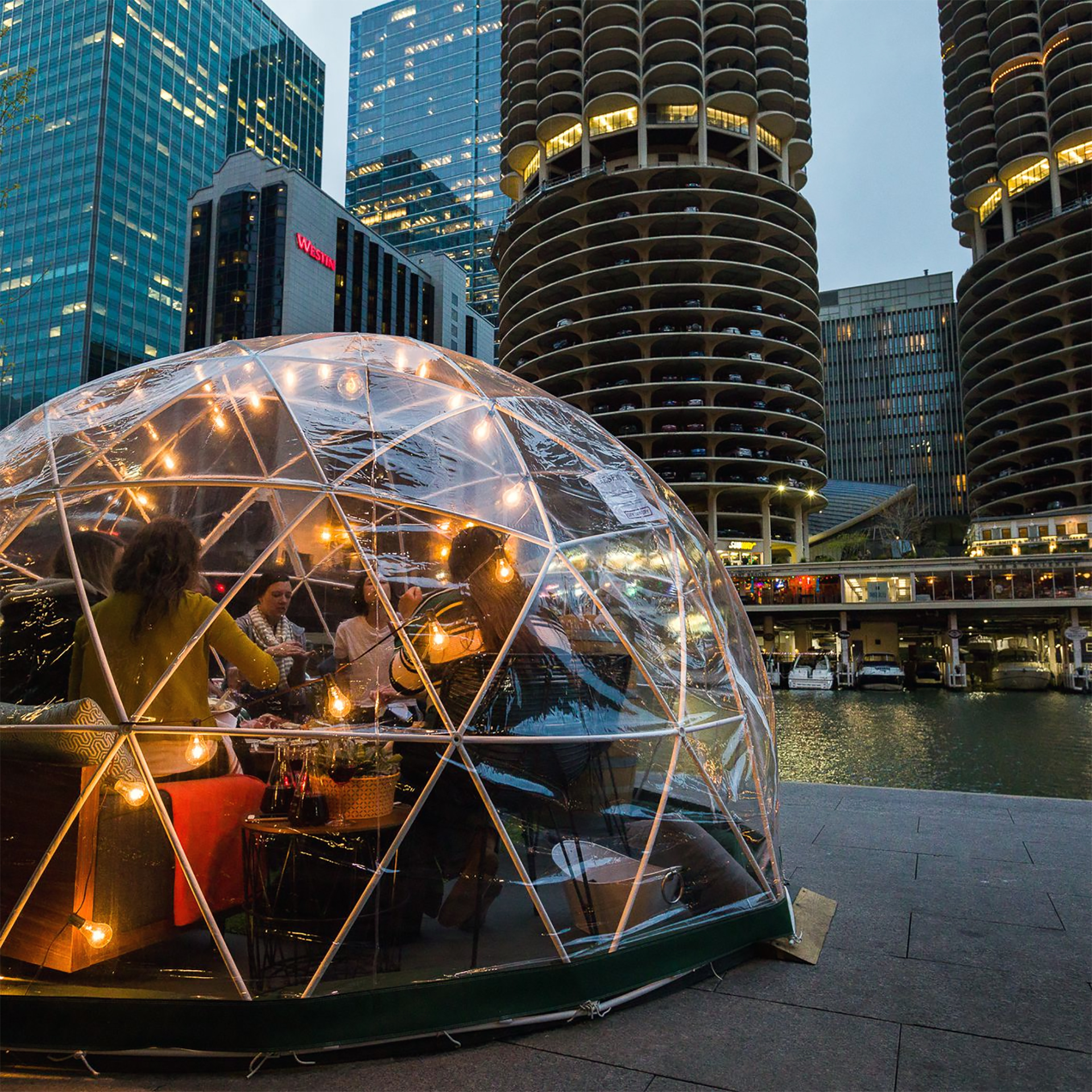 above> chicago river walk igloos were seen prior to the pandemic hitting chicago.

when thinking about your concept consider this…

“the key to outdoor dining is the free flow of air,” dr. anne rimoin, professor of epidemiology at ucla told today food about the plastic igloo concept. “it’s not clear to me that these domes will keep people in them safe nor the servers who would have to enter the domes to serve the people inside them, who would be dining presumably without masks on, with poor airflow. given the current setup, it seems that these domes might end up promoting transmission instead of preventing it.” 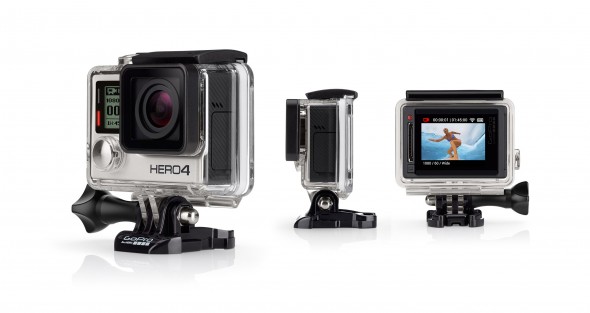 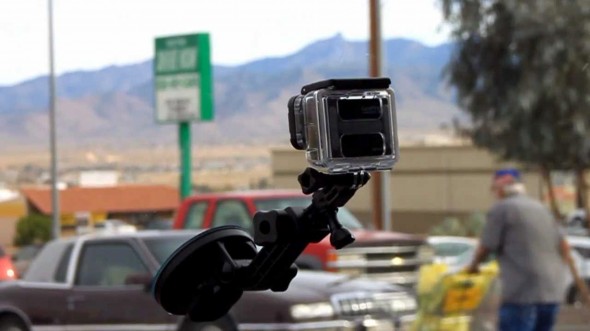 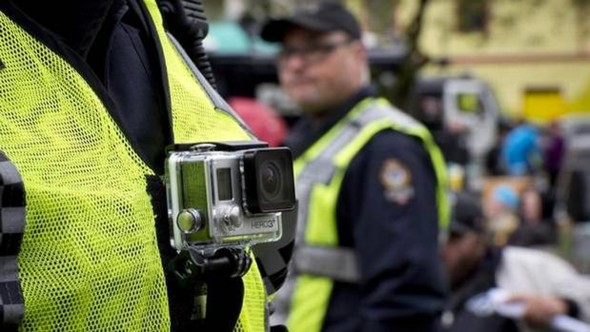 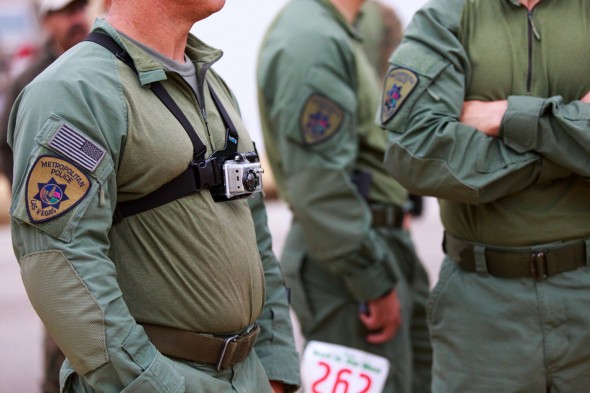 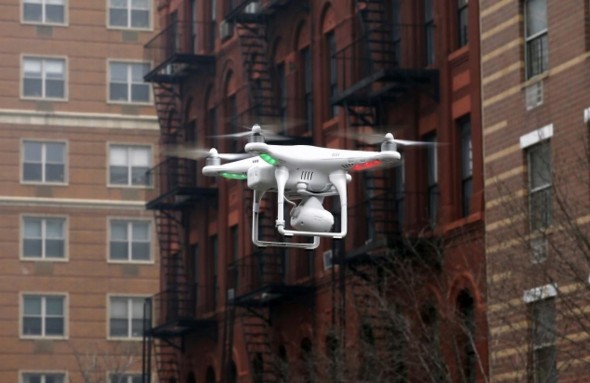 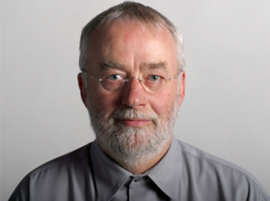 Bill Moggridge, director of the Smithsonian’s Cooper-Hewitt, National Design Museum since 2010, died Sept. 8, following a battle with cancer. He was 69 years old. Designer of the first laptop computer and co-founder of IDEO, the renowned innovation and design firm, Moggridge pioneered interaction design and integrated human factors into the design of computer software and hardware. 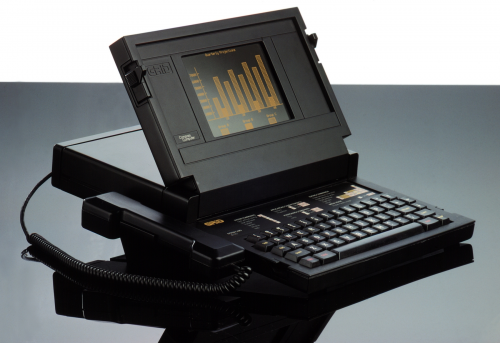 “All of us at the Smithsonian mourn the loss of a great friend, leader and design mind,” said Smithsonian Secretary Wayne Clough. “In his two short years as director of Cooper-Hewitt, Bill transformed the museum into the Smithsonian’s design lens on the world, and we are forever grateful for his extraordinary leadership and contributions.”

As Cooper-Hewitt’s fourth director, Moggridge oversaw the only museum in the United States devoted exclusively to historic and contemporary design. In this role, he worked to establish the museum as the pre-eminent national design resource, enhance its profile as one of the world’s leading authorities on the role of design in everyday life and develop and present exhibitions—both real and virtual.

“During his tenure, Bill led the museum to the highest exhibition attendance numbers on record, pioneered bringing design into the K-12 classroom and dramatically increased digital access to the collection through vehicles like the Google Art Project,” said Richard Kurin, Smithsonian Under Secretary for History, Art and Culture. “His innovative vision for the future of the museum will be realized upon reopening, and his foresight will impact museum visitors and design thinkers of tomorrow. He will be greatly missed.”

“Bill’s death is a tremendous loss to the Cooper-Hewitt family,” said Paul Herzan, chairman of the board of trustees. “We will all continue to work together to see that his strategic vision is implemented. As a designer, Bill set in motion a retelling of the story of design—its place in history and future possibilities—within the bold and interactive context of a renovated Cooper-Hewitt campus.”

“Beloved by the museum staff and the design community at large, Bill touched the lives of so many through his wise council, boundary-pushing ideas and cheerful camaraderie,” said Caroline Baumann, associate director of the museum. “A true team builder and convener by nature, his efforts at Cooper-Hewitt and throughout the design world will be forever remembered.”

Moggridge joined Cooper-Hewitt at a critical juncture, as the museum is enhancing its exhibition and visitor facilities with a fully fundraised $54 million program to increase exhibition space by 60 percent, create a new National Design Library, restore the Carnegie Mansion’s historic structure and accommodate growth of its permanent collection with a new off-site collection-storage and conservation facility. Phase One of the renovation project, involving work on the museum’s two townhouses, was completed in 2011 and includes the new National Design Library, an additional classroom, administrative and curatorial offices, and a new staff and public entrance from 9 East 90th Street. Phase Two, renovation of the Carnegie Mansion, commenced in 2012, and the new Cooper-Hewitt will reopen in 2014.

Under Moggridge’s leadership, Cooper-Hewitt is reimagining the entire museum experience, working with Diller Scofidio + Renfro on the conceptualization, transformation and creation of immersive museum spaces and memorable visitor experiences. Local Projects, a media design firm, is developing innovative media and storytelling approaches to content delivery. His expertise in interaction design informed plans to make design stories come alive with multiple interactive components focusing on the design process and transformed the museum visit from passive to participatory.

During the Carnegie Mansion renovation, Moggridge ensured that Cooper-Hewitt will remain highly visible and engaged with the public, on both national and international platforms. Off-site exhibitions were staged at the United Nations and Governors Island in New York, the Cooper-Hewitt Design Center opened in Harlem in May 2012 to bring design programming to an underserved community and his popular Bill’s Design Talk series was held at The Greene Space and webcast to the world. Further, he expanded Cooper-Hewitt’s touring program, with museum exhibitions traveling this fall to Los Angeles, St. Louis, Portland, Ore., and Paris.

A Royal Designer for Industry, 2010 winner of the Prince Philip Designers Prize, and 2009 winner of Cooper-Hewitt’s National Design Award for Lifetime Achievement, Moggridge described his career as having three phases, first as a designer, second as a leader of design teams and third as a communicator. For the first two decades as a designer, he developed his business internationally in 10 countries, designing high-tech products, including the Grid Compass, the first laptop computer, released in 1982. With the co-founding of IDEO in 1991 with David Kelley and Mike Nuttall, he turned his focus to developing practices for interdisciplinary teams and built client relationships with multinational companies. Since 2000, he had been a spokesperson for the value of design in everyday life, writing books, producing videos, giving presentations and teaching, which were further supported by the historical depth and contemporary reach of the museum.

A graduate of the Central School of Design in London, his professional activities included those of advisor to the British government on design education (1974), trustee of the Design Museum in London (1992-1995), visiting professor in interaction design at the Royal College of Art in London (1993) and member of the Steering Committee for the Interaction Design Institute in Ivrea, Italy (2003). He was the author of Designing Media, published by MIT Press in November 2010, which examines the connections between traditional mainstream media and the emerging digital realm and Designing Interactions, published by MIT Press in October 2006, which explores how interaction design is transforming daily life.

Moggridge succeeded Paul Thompson, who was Cooper-Hewitt’s director for eight years. Baumann will serve as the acting director.

He is survived by his wife of 47 years, Karin, and two sons, Alex and Erik.

[ cooper-hewitt national design museum ]
Founded in 1897, the museum has been a branch of the Smithsonian since 1967. Cooper-Hewitt presents compelling perspectives on the impact of design on daily life through active educational programs, exhibitions and publications.