[DesignApplause] We’re are with Haworth designer Nicolai Czumaj-Bront. Nicolai, congratulations, a Best of Neocon Silver. Please tell us about your Harbor Work Lounge collection.
[Nicolai Czumaj-Bront] Thank you, very proud about the award. We are introducing this collection for Haworth. Technology today allows us to work anywhere and how we want to. Because of that, we bring a lot of stuff with us. Bag, notebook, iPpod, tablet, computer, laptop or your drink. Whatever you need to feel comfortable to work the way you want. Now you can work in a private space, collaborative space, hotel lobby / rooms, at home even…

The Work Lounge is meant to allow you to work where you want, how you want to work and have the things with you that let you do the work you want to do. It has a sliding tablet that slides away from and toward you to give you room to work. It has the wing, where you can put your other items next to your phone or tablet. Even a cup-holder to provide a place for you to put your drink. The ottoman even has a cup-holder as well in it. It also has high adjustability. This way, if more people come into a space, you can have someone sit in the ottoman and get more function out of it. There is a lot of variability in the options. You can do a partial upholstered, an exposed version…you can do veneer or laminate.

[DA] What is the exposed version?
[N] The exposed is the plywood form that you would see visually. You would also have a pad and a seating area as well as a little sway pad next to you. The exposed version would be fully exposed plywood. You can really dress it up or down. It has kind of a unique look to it, but also a lot of variability in terms of application, usability and aesthetics. It changes the way we look at lounges these days and how we work at them. How we can deal with different types of spaces, but also has something that is re-adaptable.

[DA] Yes, these are beautiful and lean. They almost look like they are wanting to fly.
[N] Yes. I think in airports they would go over quite well. Then also, you see the suede on the wing, which has a dual purpose. With a wool covered wing you would have slippery gadgets falling off if you twisted or moved around. But the suede keeps things where they need to be. It’s also water resistant so if you spill, it won’t stain the fabric.

The lounge and ottoman is really a nice composition of the aesthetics, the function of it. The heights and the posture are really a hybrid between task seating and lounge seating. You can be upright in this. A little bit more than a lounge, but not so much as a task chair. Everything between the function and the ergonomics of it are balancing between those two worlds of work and home.

[DA] What’s your relationship with Haworth?
[N] I’m an internal designer with Haworth. We have a program at Haworth where we explore 3-5-10 years out. If things make sense at the time, we move them forward. We look at how people are going to be working and how things work. It made sense to introduce the ensemble now as technology has evolved to allow us to work in many places. I had this concept about 2 years ago and have been working through it. We went 100% in January to bring it to NeoCon for the show. It’s been a fairly quick pace for the program.

[DA] Being in-house, is this thing built on things that are really Haworth-natural or are there new physical properties that bring innovation?
[N] Very Haworth-natural and easy to create as we are familiar with the materials and pieces. For example, you can do left or right handed. The nice thing about this is that it’s one piece of plywood. So inside the molded foam is plywood. But then they can either cut the left or right side out. Using the manufacturing capability to allow for the variability in application or function. Even the tablet is actually a larger piece of plywood they can cut from left or right hand. It’s simple tooling that’s been around for ages, but it’s about rethinking it and how we can do it differently to provide designers more variability in the aesthetics.

[DA] What did you learn while working on this project?
[N] Things can be beautiful and still elegant and pass all of the hundreds of thousands of BIFMA standards.

That’s always the goal. Everyone always wants it lighter, elegant and beautiful, but it still has to pass all of the standards that get greater and greater every year. In some ways, it was a reward for myself and the team that we were able to take the original sketch to the computer program while maintaining the aesthetics without sacrificing anything to pass the requirements.

[DA] The solution is so clean and light. You should do a sofa. How did you create the thin profile?
[N] Right now we’re talking about maybe doing a beam for this piece. You can imagine an airport having these two wings on the outside and a middle piece in between. We’re quite far along with all the pieces we need. A few more, we might be able to do this. After that, I think we’ll see a lot more evolution in home office products. With technology now, we’ll see how things go. We have some ideas in the works. It just depends on the market and if they are ready for it.

[DA] What’s really exciting and cool right now in the world of design?
[N] I’m really curious to see what will happen with 3D printing and how it will lend itself more to some of the big manufacturers. Imagine doing a chair that doesn’t have aluminum or steel tooling. Imagine making that one-off chair so each person could have a task chair that fits them more comfortably. What would it mean for more mass production? I’m really curious to see how that evolves as we go forth. There’s a lot of opportunity there to realize the ability to make things adjustable per the user.

[DA] Creative minds are really going to do things with it.
[N] The other thing is just sharing with technology. Just the evolution we’re doing internally at Haworth and what that will mean in terms of the workplace. Working wherever you want to. The beach, the park, a museum. I’m curious what will happen with technology both in terms of digital but also in terms of production. What that will mean for all industries in general. What it means for the flexibility of people. They can be more transient and work where they want to work while having more of a lifestyle. Merging those worlds.

[DA] Have you been with Haworth for a long time? Do you do other things besides furniture?
[N] I primarily do furniture and live in Chicago. I’m from here originally. I worked for a small consultant agency for a few years. I’ve been at Haworth almost 8 years. I’ve worked on everything from tables to task seating to more high-end things such as Haworth collection pieces. But mostly doing furniture.

I also do personal stuff such as work with reclaimed wood. I’ll take it and bind it together. All the old wood that has been weathered or rained on gets C&C cut it to reveal all these new colors and textures. The idea here is balancing how much control do I really have. I’m putting the wood together, but in the end, it’s the colors and grains that allows the wood to be what it is. It’s kind of imperfection, but that’s the beauty of it.

[DA] Are these winding up as sculptures?
[N] They are more stools and tables. But I’d like to do more sculptural pieces. Working with the wood the way I do, it’s wonderful how it evolves and how the materiality shines through when you let it be its own material and not try to control it so much. In that mindset I’m kind of working with this raw material with a very high-end manufacturing process which is very precise.

[DA] Like ‘I really want to make a grasshopper, but the grain turned it into a kangaroo.’
[N] Right, kind of just let it be what it is. 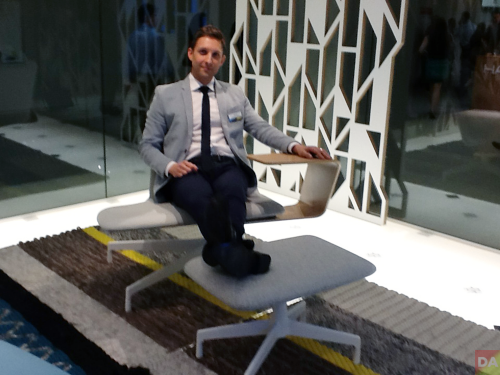